What is weed decarboxylation, how to do it and why? 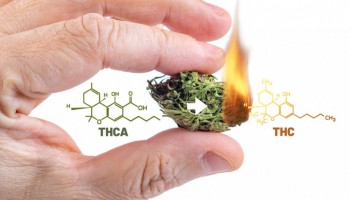 If you’re lucky enough to have some fresh cannabis which has ‘around 20% THC’ you might be surprised to know what that really means. The cannabis probably contains 18-19% THCA and around just 1% THC. THCA is chemically slightly different to THC and doesn’t get you high.

If you ate a few grams of fresh weed you wouldn't feel any psychoactive high since the fresh weed contains very little THC, and lots of THCA. But if you vape your weed, the heat from the vape (or joint) instantly converts the THCA to THC and you will get very high!

A simple definition of cannabis decarboxylation

So what exactly happens to your cannabis during decarboxylation? In their acid forms, THC and many other cannabinoids have a ‘Carboxyl’ group attached to the molecule.

That’s the way the plant biochemistry happens to create the cannabinoids. THCA, CBDA and others have a Carboxyl group which is made of one Carbon atom, two Oxygen atoms and one Hydrogen atom. Sometimes it is referred to as a carboxylic acid group. 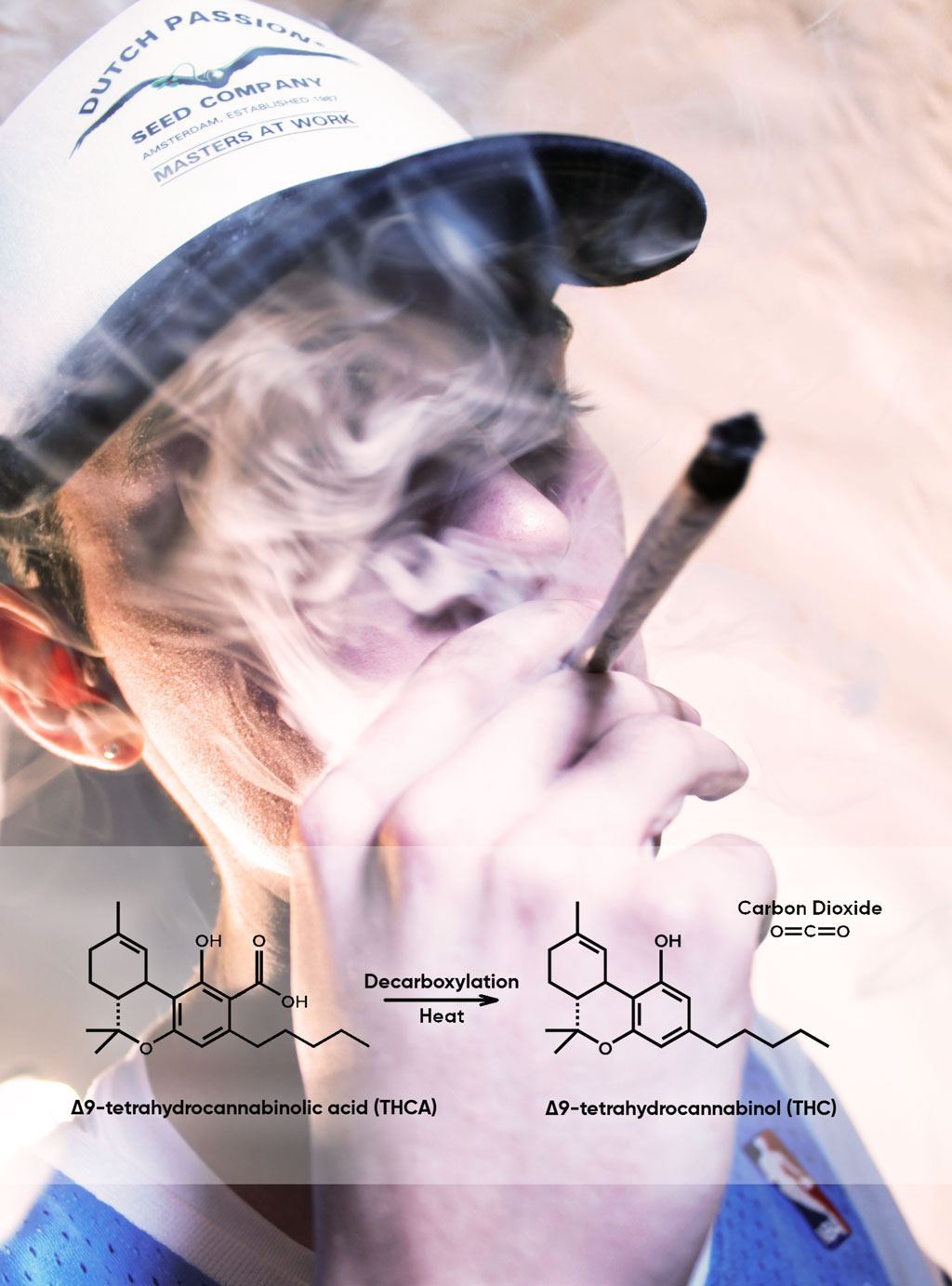 How does weed decarboxylation work?

Over time cannabinoid acids such as THCA and CBDA slowly convert into THC and CBD. This is a slow process and the vast majority of the cannabinoids present in fresh cannabis (or even 2 month cured cannabis) are in the acid forms.

Many people that vape or smoke cannabis may not even be aware of that the heat used during vaping/smoking is decarboxylating their cannabinoids. But without decarboxylation, they wouldn't get high. The flame from the burning tip of a joint instantly decarboxylates the cannabinoids, as does the heat from a vaporiser. But those making cannabis edibles need to understand weed decarboxylation in more detail if they want their edibles to have maximum potency.

If you’re planning to decarboxylate weed you also want a method that allows you plenty of latitude and control when decarboxylating your precious stash to make edibles. One of the most common ways to decarboxylate weed is to grind it up (allowing even heating) and place it on a baking tray in your oven for around 35-40 minutes at 130ºC/230ºF if it’s dry and cured weed. 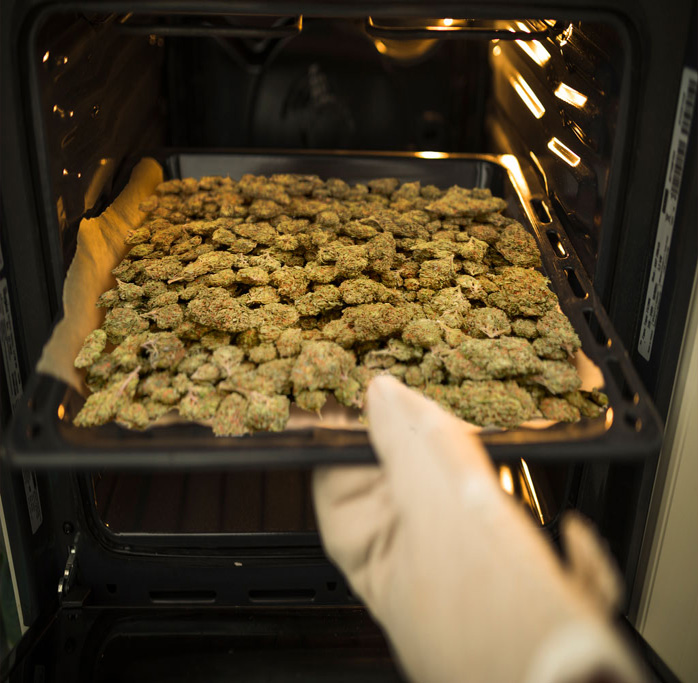 If it’s freshly harvested it will contain more water and need upwards of an hour. Too much heat will degrade quality levels and also cause further loss or aromatic terpene compounds which evaporate at elevated temperatures. Too little heat and you don't get fully decarbed weed.

● Decarboxylating your weed allows you to create the psychoactive forms of cannabinoids such as THC. This allows you to enjoy the recreational or medical benefits.

● The heat from the weed decarboxylation process will help to destroy any mold that may have found a home on your buds.

● Decarboxylating your weed also allows CBDA to convert to CBD. CBDA may have some useful benefits, but most people are more familiar with CBD and wish to focus the edible/‘medibles' on CBD rather than CBDA.

Don’t worry if the next section seems rather complicated. It may be interesting for those with a more scientific curiosity to know the total THC value (THC + THCA) in your weed if you fully decarboxylate it. Remember each cannabinoid may be present in an acid form e.g. THCA or CBDA as well as the non-acid (neutral) form e.g. THC or CBD.

The following formula helps you combine the two values. The combined level of acid + neutral form of cannabinoid is known as TOTAL%. Very often, authorities view the TOTAL% as the number they are most interested in. To calculate TOTAL% for THC & THCA the formula is:

So a freshly harvested cannabis plant with 1% THC and 19% THCA contains:

That may surprise many people who would have logically thought that 1% THC + 19% THCA would produce 20% THC. The reason for this discrepancy is that CO2 is lost during cannabis decarboxylation, this affects the TOTAL% value. For CBD the calculation is exactly the same. For CBG the multiplication factor of 0.877 is changed very slightly to 0.878. 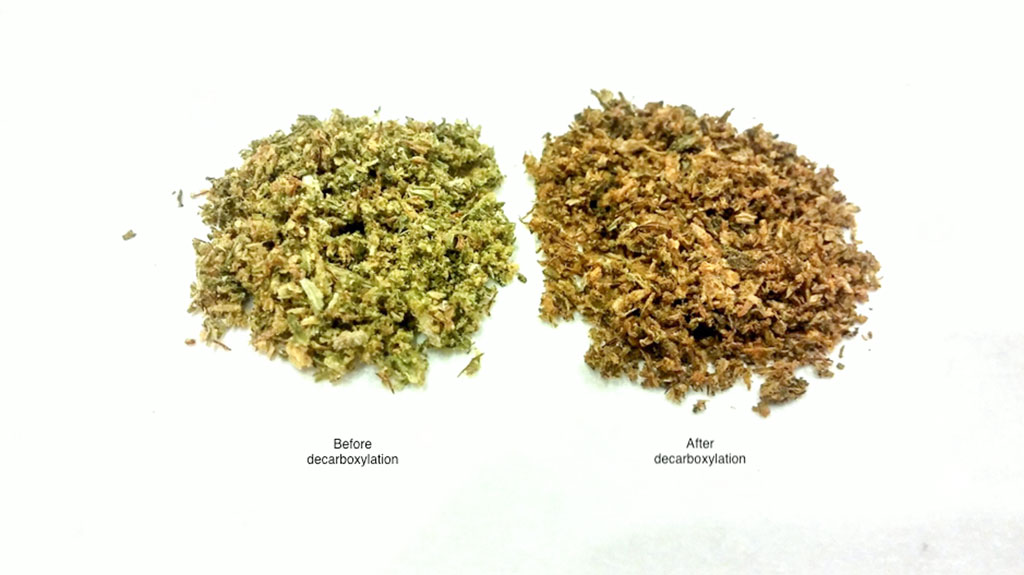 When heated in an oven set at around 100-130ºC, cannabis decarboxylation is a gradual process which occurs slowly over a period of time, rather than in an instant. Many different research studies have been performed on weed decarboxylation at varying temperatures, but they all show the same general trend. At a given temperature, the longer you heat cannabinoid acids, the higher the proportion which decarboxylates.

The Decarboxylation Graph, below, shows what happens at a temperature of 104ºC (220ºF) for various cannabinoids over a 4-hour process. To make the graph easier to understand, first look at the olive-green bar which represents THCA. Initially the bar is tall, representing high levels of THCA. But after 240 minutes there is hardly any THCA remaining.

Next, look also at the red bar, which represents THC levels. That starts off low initially, but after 240 minutes at 104ºC THC levels have maximised. Note that at a higher temperature, e.g. 130ºC (266ºF) the time required for decarboxylation would be reduced further.

In order to decarboxylate weed at a temperature of around 104ºC (220ºF) you could grind you weed and place it in an oven. Or you could vacuum seal you weed in sous-vide plastic bag in a bath of boiling water. Sous-vide bags are easy to buy, and popular with chefs who find it to be a cooking method with great consistency. 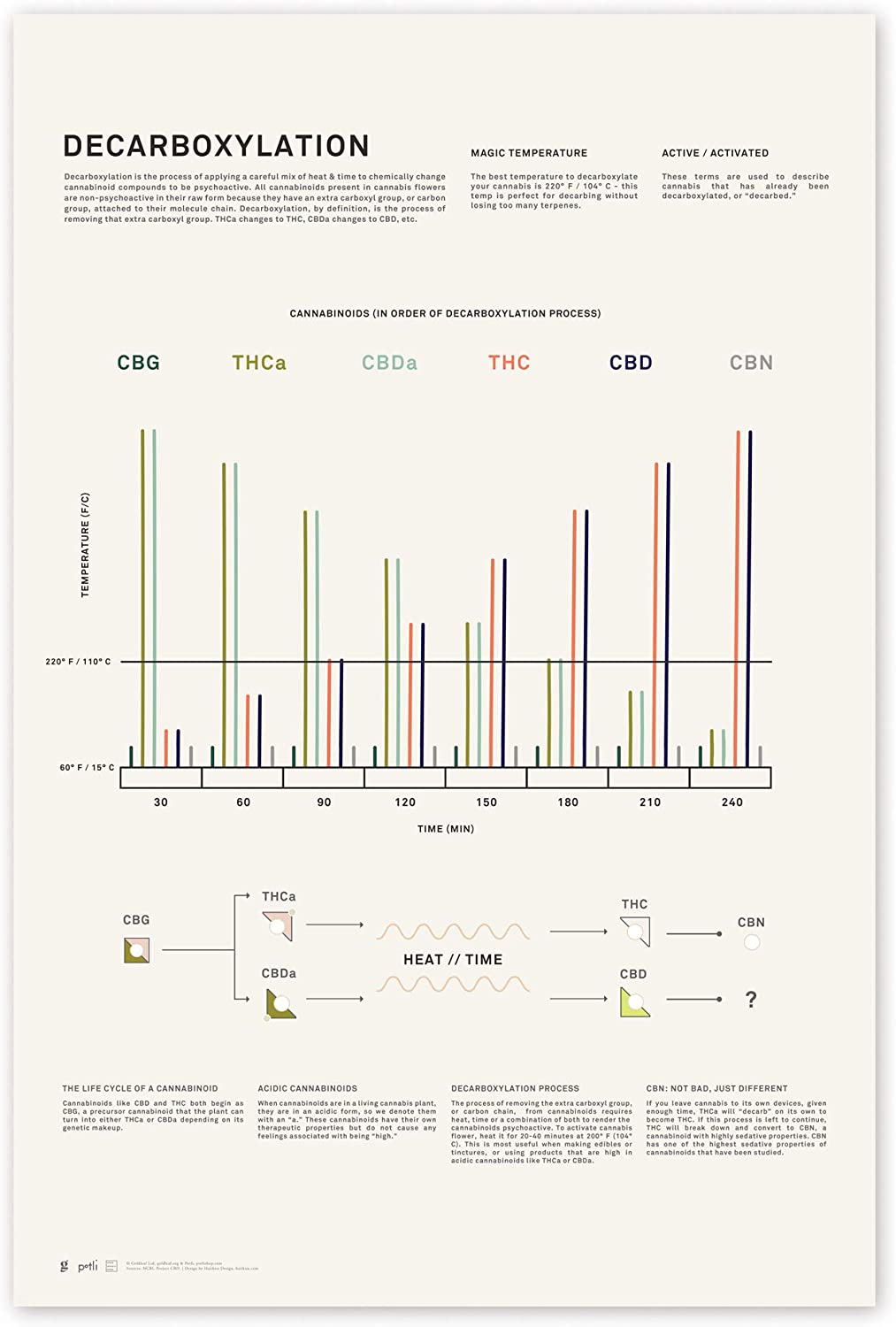 Professional cannabis extraction labs and medible producers need to decarboxylate weed on an industrial scale. The size of operation justifies buying industrial devices to heat cannabis around 100-130ºC. Often industrial size ovens are used and ground cannabis is spread out on large trays.

DIY home growers often find that their domestic oven is an easy way to decarboxylate weed. The weed should be ground up to ensure that it is all evenly affected by the heat. You may wish to cover the weed with some aluminium kitchen foil if you have a fan assisted oven. This will prevent the weed from being blown around the inside of your oven. Note that a cannabis aroma will be produced during this process.

The other popular method to decarboxylate weed is using kitchen sous-vide bags.

The graph, above, shows the time required for conversion of acid cannabinoids (THCA & CBDA etc) into their non-acid forms (THC & CBD) at 104ºC/220ºF. Note that the rate of a chemical reaction approximately doubles for every 10ºC rise in temperature.

Remember that the fresh buds from a recently grown plant will have the vast majority of the cannabinoids locked up in their acid forms. You could eat several grams of fresh bud and not feel any psychoactive effects.

You don't have to grind your buds into a powder before heating and decarboxylating them, though it is recommended.

Some large industrial-scale producers do heat non-ground buds (and trim) in large ovens and heat for a little longer to allow for the fact that they were whole buds. But most domestic growers that are decarboxylating weed often prefer to keep things as simple and straightforward as possible.

Once they have a system that works for them, they stick to it. Note that your oven may not be precisely calibrated to the temperature on the display, so you may need to experiment a little.

Grinding the buds or not before decarb 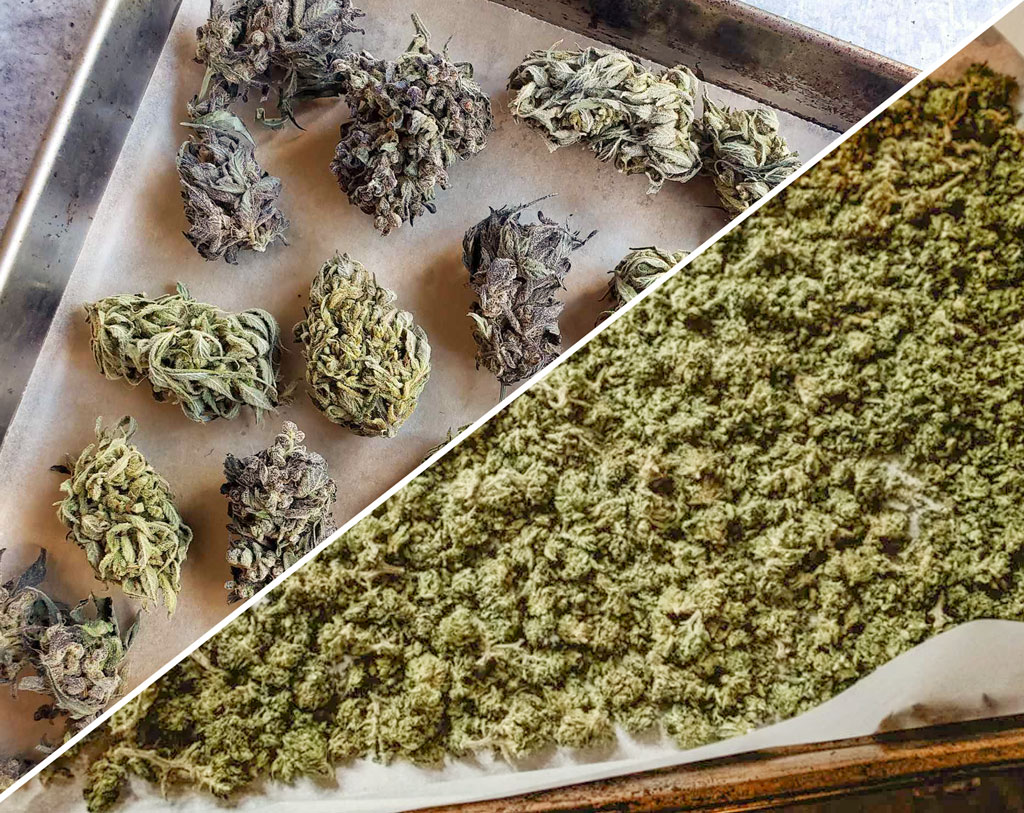 Managing the smell of decarboxylation

Unless you have professional oven extraction, managing the smell of decarboxylation is not easy. Some people wait until the weather is particularly windy since this helps the natural dispersion of the cannabis aromas. Another option is to consider the sealed plastic sous-vide bag method. Because the bag is sealed, smell is minimised during weed decarboxylation.

Other options include the use of an extraction fan to clean the air in the room where the oven is placed. Some products can mask the smell of cannabis such as ONA gel. Others will try to hide the cannabis aroma by decarboxylating their weed in the middle of the night (when neighbours may be asleep) or they will use various natural aromatic oils to try to mask the smell.

Once you have decarboxylated your cannabis buds they can be stored in the normal way. For many people that means putting them in jars and eventually in cold storage, such as the fridge or freezer. This will preserve maximum potency and e.g. slow down the natural decomposition of THC into CBN.

Without access to professional lab analysis it is difficult to assess the potency of your decarbed cannabis. Much depends on the growing conditions, the grower experience and the quality of the original cannabis seeds. Even the best growers won't be able to get 20%+ THC levels from low grade cannabis seeds.

If you want to know the THC potential of your autoflower seeds (or feminised seeds) then check out the various search filters available on the Dutch Passion cannabis seeds collection. You can buy cannabis seeds with less than 1% THC or seeds of our Extremely High THC seed collection (over 20%-25% THC).

Understanding why to decarb cannabis

Many people that only smoke or vape cannabis are unaware of the fact that they only get high because the heat from the joint/vaporiser is decarboxylating the cannabinoid acids and converting them to their active form. But anyone making cannabis concentrates, oils or extracts for edible consumption needs to clearly understand the process and science behind weed decarboxylation.

It’s not that complicated. In its simplest form, you can put a tray of ground buds on an oven tray for an hour at around 130ºC (266ºF). The sous-vide water bath method is also popular. Good luck and have fun decarboxylating your own weed to make edible products with it! 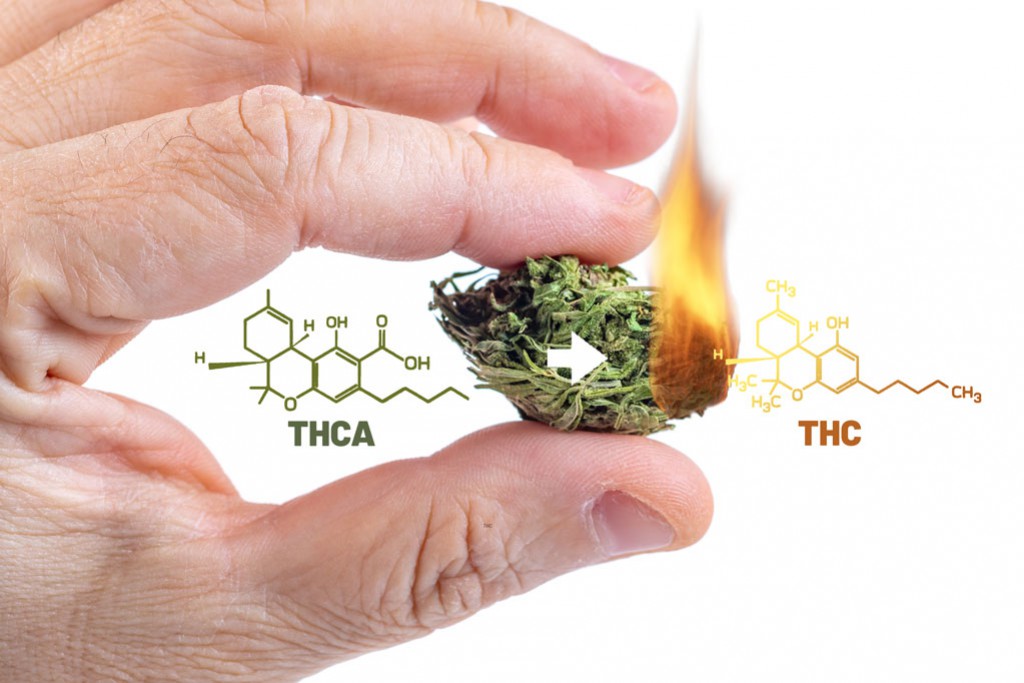