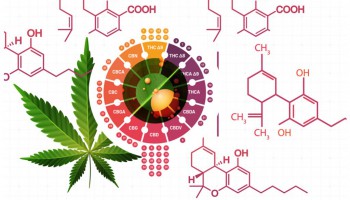 Cannabinoids are a family of chemical compounds found in the cannabis plant. Some of these are psychoactive such as THC (Tetrahydrocannabinol) and can produce feelings of euphoria and relaxation. Other cannabinoids such as CBD (cannabidiol) don't have any pleasurable psychoactive effects but are attracting huge amounts of medical interest from pharmaceutical companies keen to know more about their medical properties.

There is much more to learn about cannabinoids than just THC and CBD. Around 100, or more, additional cannabinoids are thought to be present in cannabis. Their medical effects are only just starting to be discovered. Interest in cannabinoids has never been higher, especially for the potential medical uses.

How many cannabinoids are there?

To this date, at least 113 different cannabinoids have been isolated from the Cannabis plant. But there is some scientific disagreement about the precise number as more research is conducted into cannabinoid science and new breakthroughs/discoveries are made. The two best known cannabinoids are THC and CBD, but other minor cannabinoids are starting to receive attention as cannabinoid research intensifies, knowledge expands and pharmaceutical interest gathers pace.

Dutch Passion were also the first to offer low-THC high-CBD seeds of strains such as CBD Charlotte’s Angel and Auto CBD Charlotte’s Angel. These strains offer CBD levels of around 15% and THC levels below 1%. You can't get high from such strains, making them popular with many medical cannabis growers.

Medical science is having a hard time keeping up with the data starting to emerge from cannabinoid research! As cannabis prohibition lifts across the world, the scientific appetite increases for more information on the properties of each cannabinoid. In reality, a huge amount of work, effort and research still remains to be done.

Decades of political interference and prohibition has left a knowledge vacuum which is only slowly being filled. Questions such as ‘which cannabinoids amplify the effects of others’ are still almost impossible to answer. This makes it very difficult to understand the synergies (or antagonistic properties) which may exist between particular cannabinoids as well as making it difficult to predict which cannabinoids would best suit particular illnesses/diseases. 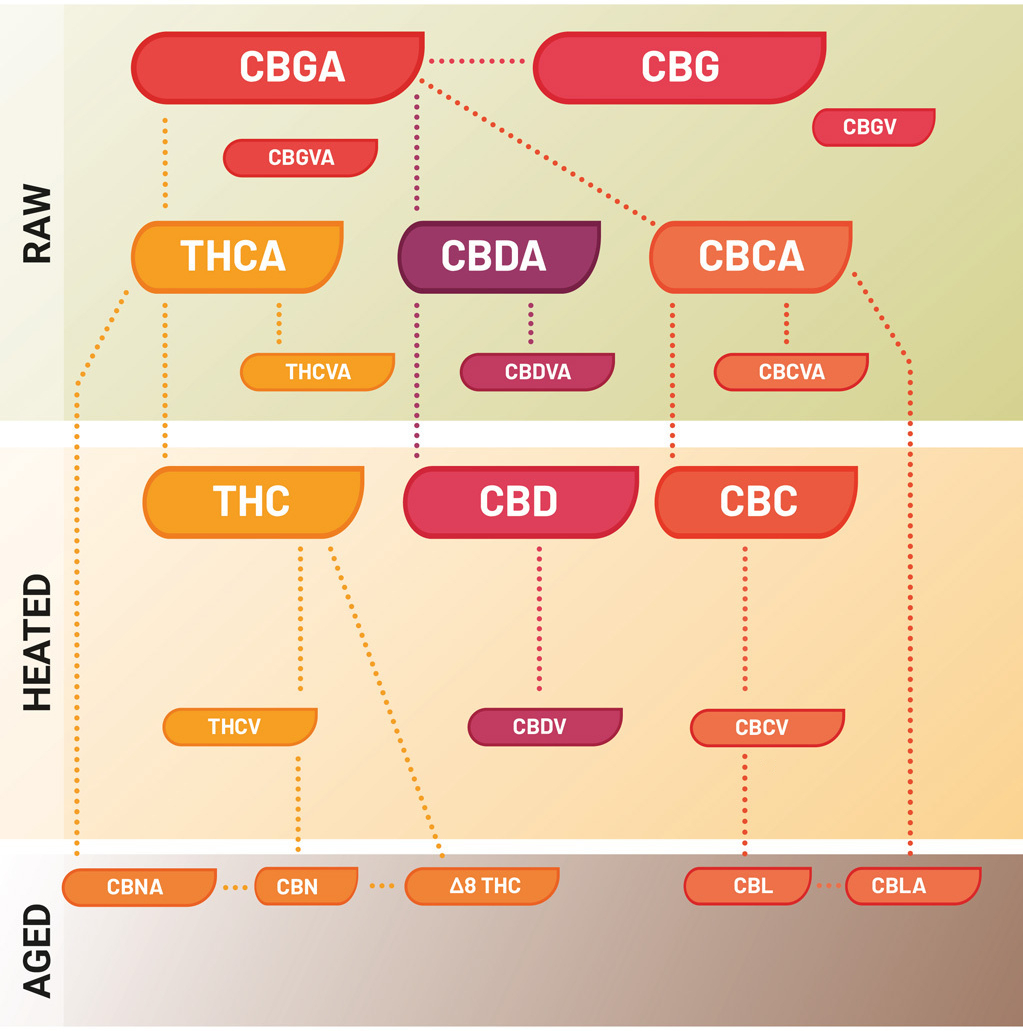 THCA is a raw cannabinoid with no psycho-activity. When vaped, the heat converts THCA into THC which is highly psychoactive. This shows the dramatic changes that can happen to the effects of individual cannabinoids with a small amount of heat. THC can also later convert to CBN when left for long periods.

CBGA (Cannabigerolic Acid)
This is the acidic form of CBG (Cannabigerol). When cannabis is grown, olivetolic acid and geranyl diphosphate are combined to form CBGA. When heated, raw CBGA releases CO2 and converts into CBG (Cannabigerol) which is regarded as the mother compound, from which other cannabinoids are then synthesised. The first CBG rich cannabis strains to be released were CBG-Force and Auto CBG-Force by Dutch Passion.

THCA (Tetrahydrocannabinolic acid)
THCA is the raw version of the well-known THC. THC produces the euphoric cannabis high and various other effects. However, in the raw form, THCA has no psycho-activity. Some people juice raw cannabis plants (without any heat application!) in order to enjoy THCA without getting high.

THCVA (Tetrahydrocannabivarinic acid)
THCVA is the raw form of THCV. When heated it forms the more familiar cannabinoid known as THCV (tetrahydrocannabivarin). Dutch Passion were the first to release THCV cannabis seeds as THC-Victory. These eventually produce plants with around 6-8% THCV and a similar level of THC. Medical interest is focussed on the potential for blood sugar changes and possible appetite control.

CBDA (Cannabidiolic Acid)
CBDA is the raw form of CBD. CBD is a well known cannabinoid, often regarded by the general public as a ‘wellness’ cannabinoid and found in a variety of products from skin creams to edible products. Some users claim that CBD helps them remain calm.

CBDVA (Cannabidivarinic Acid)
CBDVA is the raw form of CBDV (Cannabidivarin). When heated, CBDVA releases CO2 in a process known as decarboxylation and converts to CBDV. Both CBDVA and CBDV are non-psychoactive and have been involved in research into drug resistant epilepsy. Dutch Passion were the first to offer CBDV seeds in the form of Auto CBD-Victory. The resulting plants produce around 4-6% CBDV with a similar level of CBD.

CBCA (Cannabichromenic Acid)
CBCA is the raw form of cannabichromene (CBC). It is of interest for it’s anti-inflammatory, anti-bacterial and anti-fungal properties.

CBCVA (Cannabichromevarinic acid)
CBCVA is the raw form of Cannabichromevarin (CBCV). This is of interest as a possible anti-convulsant with potential in anti-epileptic medicine. It was first identified in Thai weed by the University of Nagasaki in 1975.

Heated cannabinoids are the result of heating raw cannabinoids found in the fresh plant material. Often the heated cannabinoids convert from the acidic chemical form to the non-acidic ‘raw’ form in the presence of heat, releasing CO2 in the process. The heat could be supplied from a vaporiser or a joint.

Sometimes heat is applied e.g. to remove solvents during cannabis concentrate production. When this is the case, the resulting cannabinoids are decarboxylated by the heat which converts the cannabinoids to their ‘heated’ (non-acidic) form. Sometimes, the properties of heated cannabinoids are substantially different to those of raw cannabinoids. 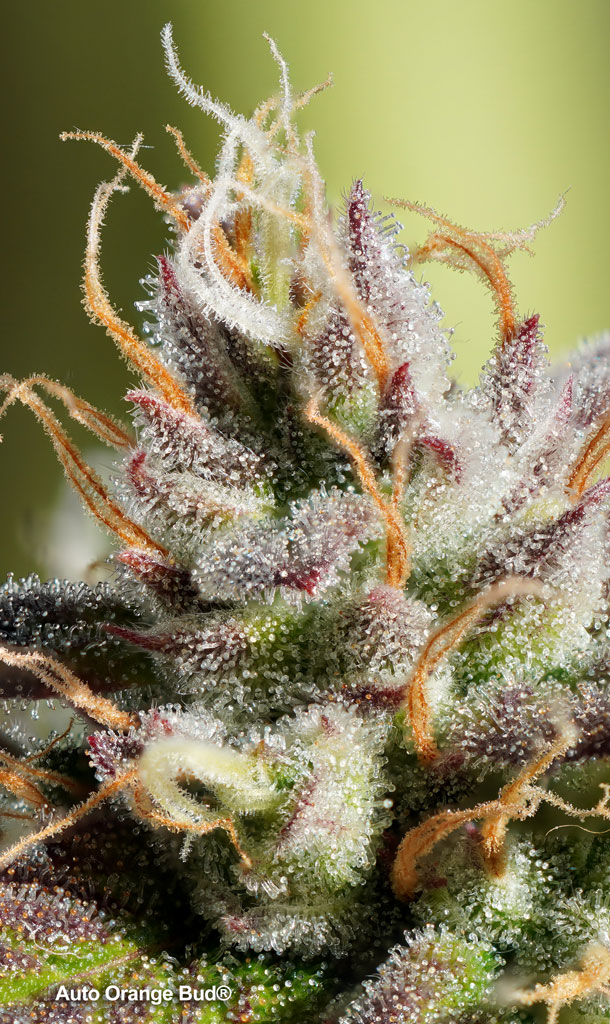 THC (Tetrahydrocannabinol)
THC is the main cannabinoid which most people would closely associate with cannabis. It’s responsible for the pleasurable high and euphoric effects. It also reduces pain (useful for medical users), increases appetite and assists sleep. Valued by both recreational and medical users.

THCV (Tetrahydrocannabivarin)
THCV can be produced by any home grower, just grow some THC-Victory feminised cannabis seeds! They take around 11 weeks to complete bloom with around 6-8% THCV in the dry buds. They contain a similar level of THC, so expect a mild high.

CBD (Cannabidiol)
CBD, alongside THC, is a cannabinoid which many members of the public would be able to identify. It has no psychoactive effects but many people use CBD products because they feel it aids relaxation and promotes a sense of calmness.

CBC (Cannabichromene)
More medical studies are required to begin the process of understanding the supposed anti-bacterial, anti-stress and anti-fungal properties of CBC. This process should be accelerated by the availability of a CBC rich cannabis strain, which is currently receiving a great deal of attention from cannabis geneticists!

CBCV (Cannabichromevarin)
Interest in possible applications for epilepsy and as an anti-convulsant have kept interest levels high in CBCV. Some cancer researchers are also thought to be interested in possible uses for CBCV. Not thought to be psychoactive, which could increase the medical appeal.

CBG (Cannabigerol)
CBG is the parent cannabinoid from which many of the others are formed, this makes it particularly interesting to both growers and cannabis geneticists. Often CBG is present only in trace quantities. Special cannabinoid strains such as Auto CBG-Force are now publicly available for the first time. Much more medical research is required to better understand this ‘mother cannabinoid’.

CBGV (Cannabigerivarin)
CBGV is chemically similar (a ‘homolog’) to CBG and is produced as a breakdown product from raw CBGA. There is very little research to report so far on CBGV.

Aged cannabinoids are those which have degraded from their original state. This ageing could be the result of oxidation (e.g. leaving cannabis to age over a couple of years), UV light exposure or isomerisation (a type of structural chemical change). Aged cannabinoids can have quite different properties and effects to those of their raw or heated predecessors.

CBNA (Cannabinolic Acid)
When cannabis is exposed to air or UV light (e.g. from the sun), THCA will convert to cannabinolic acid (CBNA). This can happen if low quality cannabis is left drying in the sun for extended periods of time.

CBN (Cannabinol)
CBN is then formed by the decarboxylation of CBNA. When CBNA is left, or heated, it degrades into CBN after losing a CO2 molecule. CBN is only mildly psychoactive and is thought to produce sedating effects. CBN is also found in elevated quantities in hash.

Delta-8 THC
Delta-8 THC is an isomer of THC. That means it is almost chemically identical but with a slightly different spatial arrangement of the atoms. It is thought to have multiple uses, effective against nausea, anxiety and with pain killing and possible neuroprotective properties. Delta-8 THC will still medicate (or intoxicate) in a similar way to THC though with a fraction less potency per milligram.

Boiling point (°C): 384ºC (probably too high for a vaporiser to reach)

CBL (Cannabicyclol)
CBL is formed when Cannabichromene degrades in acidic conditions, or with UV aging. CBL is a non-psychoactive compound though much more research is required to better understand it.

How do cannabinoids work in the body? 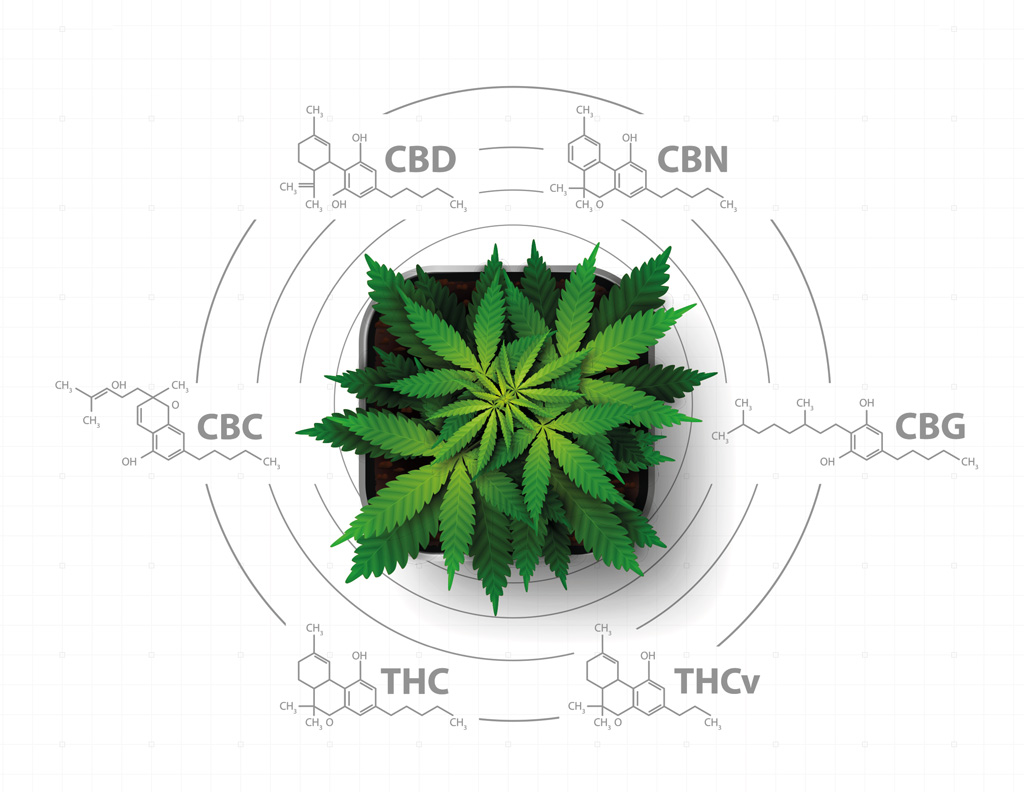 In the 1990’s scientists discovered the presence of the human endo cannabinoid system (‘ECS’). The ECS remains under preliminary research, meaning that much more clinical work is required. But the ECS is thought to be involved in the regulation of cognitive and physiological systems. These include appetite, pain, mood, memory, immune responses etc.

After so many years of cannabis prohibition, medical science is only just starting the research required to fully explore cannabinoid biochemistry. Much more remains to be done.

Meanwhile perhaps the most exciting chapter in cannabis history is just unfolding. Cannabinoids are one of the most abundant and promising yet least explored natural medicines. Dutch Passion have already been first to release new strains rich in THCV, CBDV and CBG. The team remain fully committed to more research into new strains rich in rare, novel cannabinoids. Stay tuned to the Dutch Passion website for the latest cannabinoid news. 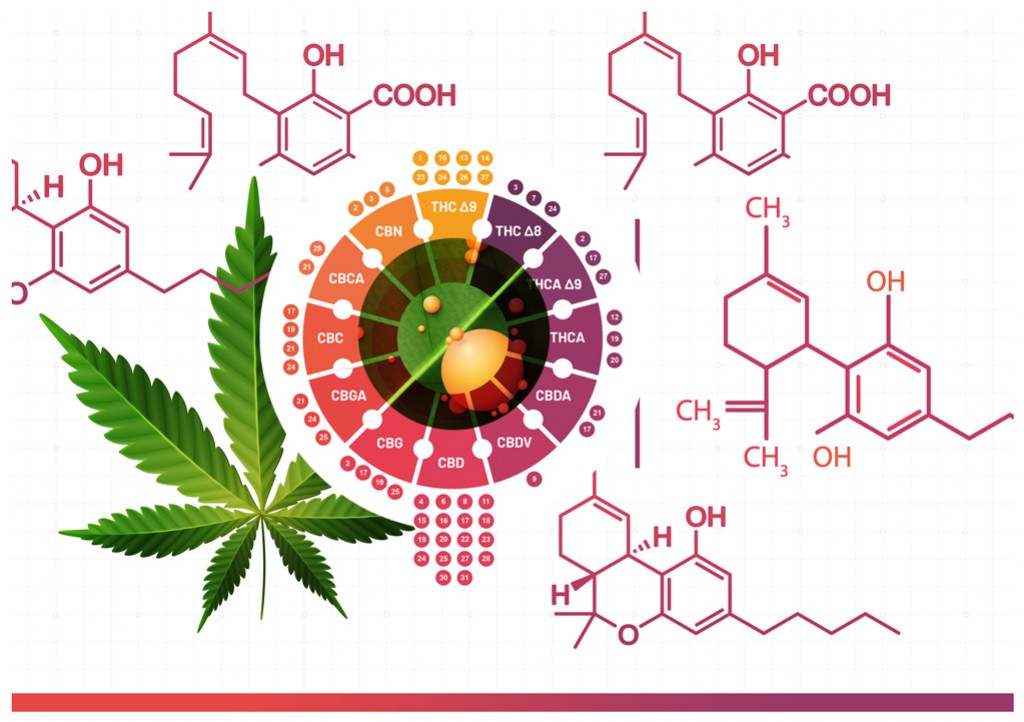