Cannabis plants supply the cannabis used by society’s recreational and medical users. Cannabis plants are easy to grow but need good grow conditions and the best seeds in order to deliver the very best quality marijuana.

Cannabis plants are dioecious, they can be either male or female though at the end of the female flowering cycle occasional male flowers can be produced.The female plants produce the buds that are subsequently dried and known as marijuana. The male cannabis plants tend to be discarded by growers in order to prevent the male pollen from filling the female plants with seed, turning potentially premium quality bud into lower quality seeded weed. Growing with feminised seed has become the norm for many and it avoids the problems of male plants appearing in the garden. 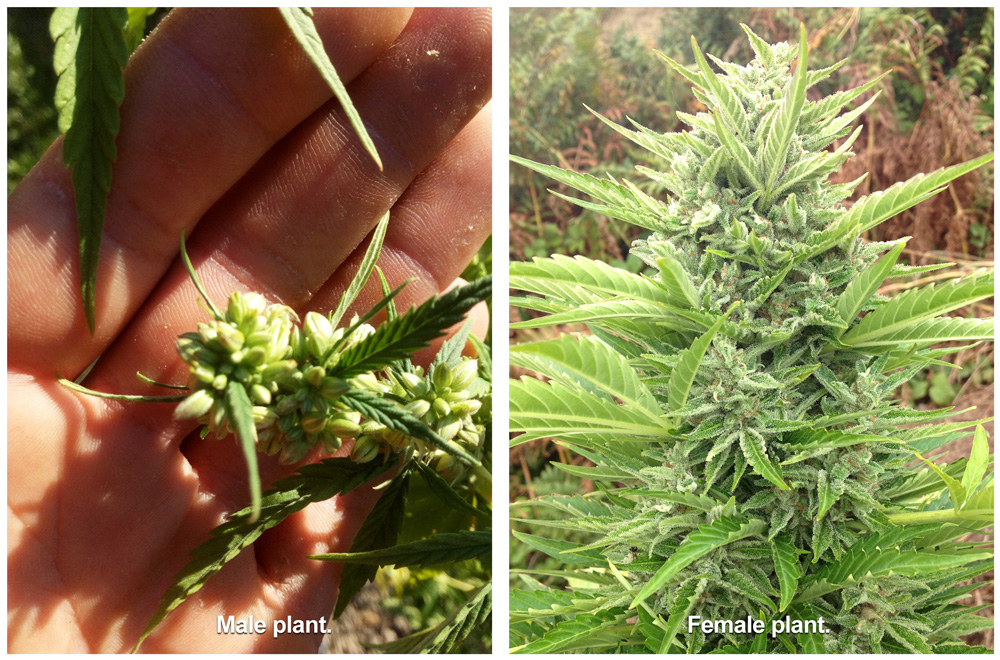 Home grown cannabis has seen an incredible boom in popularity in the last 2-3 decades. Part of the reason for this is that the supply of good quality cannabis seeds has never been as extensive as it is today. Likewise all the equipment needed to grow cannabis indoors is also freely available. Those growing cannabis outdoors or in greenhouses need no special equipment, just good quality soil and plenty of sun. In its simplest form growing cannabis in a greenhouse only requires a seed to germinate. After that the plant will happily grow to maturity without any special care or attention, just water and perhaps an occasional feed. The arrival of the internet and a wide array of cannabis grow manuals means that anyone can quickly learn the basic skills needed to become entirely self sufficient in their cannabis supply. Today millions of people are already self sufficient in their cannabis supply. A generation ago most people bought their weed on the streets but today more users than ever grow their own cannabis plants.

Cannabis plants that are grown outdoors or in large greenhouses can easily reach 2-3 metres tall and sometimes even taller. However some of the newer autofem seeds grow from seed to bud in just 10 weeks whether grown indoors, outdoors or in a greenhouse. These plants may only reach 50cm tall, so the cannabis plant comes in a wide range of sizes and types.

Cannabis plants are being bred for quite specific medical applications and many people see medical marijuana as a huge future growth industry. Medical cannabis use is slowly gaining mainstream acceptance in many countries, and in some countries medical weed is tolerated quite openly. However assuring a continued supply of medical weed that has been grown properly and organically can be difficult. Therefore many med users now grow their own cannabis plants themselves or as part of a ‘grow co-operative’. A small cannabis plant may only yield an ounce (25-30grams) of weed. But a large well grown plant can easily yield several hundred grams if allowed unrestricted root and canopy space. Dutch Passion offers a selection of CBD Rich varieties, which are very popular under medical users.

Grow your own recreational cannabis from seeds

Recreational cannabis users may not need a regular supply in the same way as medical users, but they tend to prefer to have a generous stash of good quality weed, and why not? Growing your own cannabis plants not only allows a predictable supply of weed, but it is more or less a free supply. Good seeds cost only a few euro’s each. Even the very best seeds are available for around €10 each and the cost of these in comparison to the value of quality weed they produce is miniscule. That is one reason to think carefully about who you buy your cannabis seeds from.

‘Growing your own’ cannabis plants has seen a huge popularity boom in the last couple of decades. People are no longer afraid to buy some seeds and have a go at growing themselves. No secret or special knowledge is required and all the information and equipment is easily available. So long as you are growing a few plants for your own use, the penalties for getting caught are not that severe unless you are unfortunate enough to be living in a country with truly archaic drug laws. With the right planning and sensible precautions the chances of getting caught can be absolutely minimised. After all the vast majority of cannabis growers never get busted. The vast majority of cannabis plants being grown as you read this will manage to reach full maturity. The personal grower with just a few plants growing indoors or in the back-garden greenhouse can reasonably assume he is quite safe with his secret hobby so long as a few basic safety measures are taken. After all, few police forces really have the time and resources to aggressively chase and persecute the cannabis grower who is intent only on self sufficiency.

The re-acceptance of cannabis plants into society

Society is beginning to accept the cannabis plant once again. The medical marijuana community are playing a key role. With pro-cannabis science replacing anti-cannabis hysteria it is quite likely that cannabis will see gradual re-acceptance into society. After all cannabis has been used for thousands of years and so far hasn’t killed anyone. Contrast that with the alcohol and tobacco industry. Society openly tolerates highly addictive tobacco that kills thousands, society openly tolerates alcohol and all the carnage that it brings to the lives of those that abuse it (and their families). Yet many of our legal systems vindictively pursue and criminalise those that are socially responsible recreational or medical cannabis users. The laws in many countries make no sense and it will be the medical marijuana users that will eventually overturn these hypocritical laws.

Of course cannabis, like any other medicine or recreational drug can be misused and no-one wants to see that. But why the cannabis plant has been singled out for special prejudice, and why the users have been so vindictively criminalised is something that few people can really understand. The whole perception of cannabis use has been clouded by many years of misinformation, prejudice and bias. Undoing this is taking time. The cannabis plant may not be entirely free right now, but it is well on its way to freedom and the medical movement is proving to be a vital factor.

Meanwhile those that grow their own cannabis plants for whatever purpose do so regardless of laws that have little relevance in the day-to-day lives of those who appreciate and enjoy their cannabis.
The biggest change in the cultivation of cannabis plants in the last generation is the change away from centralised cultivation to local cultivation. A generation ago much of the weed in markets such as Europe and USA was imported by the boat load by professional dope smugglers. A generation later and more growers than ever grow their own seeds and in doing so have eliminated a large amount of work for customs officers who hopefully can now do something more useful with their time.

Cannabis grown by the end users themselves

The last generation has seen massive change for the cannabis plant with the creation of feminised seeds, autoflowering seeds and a truly enormous investment into improved quality genetics thanks to the superior quality seedbanks. But perhaps the biggest change is not actually the cannabis plant itself, it is the fact that it is now grown so extensively by the end users themselves. In every neighbourhood in every city in every country in Europe there will be people growing their own top quality ganja this year. The same is true in other continents. Hundreds of back garden greenhouses in every city will have a cannabis plant or two in them. Many houses and apartments will have a corner devoted to dope production. Quiet countryside lanes will have the occasional cannabis plant growing out of sight, behind the nettles.