The Netherlands: Dutch Can Grow Five Marijuana Plants, No Problem, but…

The Netherlands - People can grow up to five marijuana plants at home without facing criminal charges, no matter how big the harvest, the Dutch high court ruled Tuesday. BUT the plants must be handed over to police if they come on an official visit, the court held. 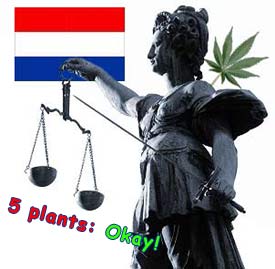 The Netherlands: Dutch Can Grow Five Marijuana Plants, No Problem,  but...

The ruling addresses two separate marijuana cultivation cases from 2006 and 2008. In one case, a man was found to have five plants in his garden that yielded nearly five pounds of pot. In the other case, a couple was found with five plants yielding nearly 12 pounds. Prosecutors had argued that the large harvests violated regulations that allow individuals to possess up to five grams of marijuana for their own use. It is unclear what the cultivators intended to do with their harvests.

Under Dutch policy, licensed coffee shops can sell pot to customers, but the policy makes no provision for growing pot for the coffee shops to sell. A significant black market has grown up to supply the coffee houses.


Rwanda: Plans by the government to allow the medical use of cannabis

In June last year, Rwanda took the initial steps in allowing cannabis strictly for medical purposes, the first country in Africa to do so. The proposed law provides that cannabis will only be administered in health institutions to relieve pain and other severe diseases.

The  Minister of Health, Dr Richard Sezibera, while presenting the draft law to Parliament, said that the objective of the Bill was to contribute to the protection of the population while "ensuring that drugs and psychotropic substances are exclusively available for  scientific and medical purposes". If the Bill passes into law, Rwanda will join the ranks of countries such as The Netherlands, Israel and Canada, where, with a doctor's prescription, patients are allowed to possess a small amount of the drug to alleviate chronic debilitating symptoms such as neuropathic pain and side effects of chemotherapy.

Washington Gov. Chris Gregoire Friday vetoed large parts of a medical marijuana bill that would have created a state-wide patient and provider registry and a state-licensed and regulated dispensary system, citing the potential threat to state workers who could be prosecuted under federal law.

Gregoire's partial veto eliminated the dispensary and registry provisions, leaving little left of Senate Bill 4073 but a reiteration of existing affirmative defenses for patients and providers. In her veto statement, Gov. Gregoire said that the dispensary licensing and regulation provisions "would direct employees of the state departments of Health and Agriculture to authorize and license commercial businesses that produce, process or dispense cannabis.

These sections would open public employees to federal prosecution, and the United States Attorneys have made it clear that state law would not provide these individuals safe harbor from federal prosecution. No state employee should be required to violate federal criminal law in order to fulfill duties under state law. For these reasons, I have vetoed" the relevant sections.

A stricter set of rules and a surprise political alliance are helping build momentum for a long-thwarted effort to legalize marijuana for medical purposes in Illinois. Some lawmakers are looking to make cannabis available for people seeking relief from symptoms of maladies that include multiple sclerosis, cancer and HIV/AIDS.

To pick up support, they must allay fears by opponents concerned that the measure is the first step toward decriminalizing marijuana and worried that Illinois will end up like California, where pot is easily available to anyone with a doctor's note and complaints about headaches or anxiety. In Illinois, doses would be dispensed from a limited number of highly regulated not-for-profits, rather than drugstores. Penalties including potential prison time would discourage attempts to turn a medical prescription into dime bags on the street.

Under the terms of the agreement, Novartis will have exclusive commercialisation rights to Sativex and will also be responsible for regulatory filings.

At the Sophia Children's Hospital in Rotterdam, The Netherlands, the behaviour of 4077 children at the age of 18 months was correlated with substance use in early pregnancy.

Cannabis use was associated with a small increase of risk for aggressive behaviour and attention problems in girls, but not boys.