Bundles containing 1,200 marijuana plants cut down by narcotics agents hours earlier were stolen, possibly by the illicit growers, from a site in the Mount Tamalpais (near San Franciso) watershed in the middle of the night, water district officials said. Narcotics agents valued the stolen haul, part of 20,000 plants discovered at several Marin County pot gardens earlier in the week, at roughly $3 million. The stolen plants had been cut, bundled and were ready to be taken outfrom the remote location by helicopter.The bust sites and plants were being guarded by law enforcement overnight, but because individual gardens were scattered over several remote locations, some areas went unattended, officials said. 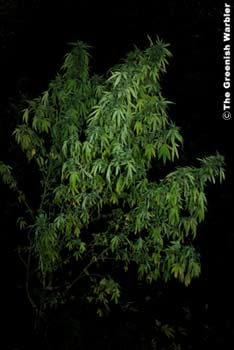 Seized plants were stolen at night...

A judge told South Dakota officials on 25 August to make substantial changes in the language that will appear on the November ballot to explain a proposal that would legalize the use of cannabis for medical purposes. Voters in November will decide whether to legalize cannabis for people who have certain  medical conditions such as cancer, AIDS or chronic pain. The ballot will be explained by Attorney General Larry Long.

Oregonians passed the Oregon Medical Marijuana Act (OMMA) by voter initiative in 1998 but opponents still threaten it. The Oregon Medical Marijuana Program (OMMP) annual permit is $100 for most but is discounted to $20 for the nearly 30% of registrants on the Oregon Health Plan or SSI. Patients can barely afford these fees. Yet, medical marijuana opponents seek a large fee increase. A Business Plan for Rebuilding Substance Abuse Prevention, Treatment, and Recovery. Prepared for: Governor Kulongoski and Members of the Oregon Legislative Assembly By The Governor's Council on Alcohol & Drug Abuse Programs proposes to: "Increase medical marijuana card application and renewal fee to $150 and earmark revenue above the level required to administer the program for prevention, treatment and recovery services program beginning in the 2007-2009 biennium".

A handful of Northern California city leaders and a medical marijuana advocacy group held a press conference in San Diego to say cities and counties would benefit by creating dispensaries where patients could get their legal pot. The roughly 20-minute press conference featured testimony from Northern California city council leaders of cities that had alreadycreated regulations allowing marijuana dispensaries to operate – and featured the release of a report that studied several dispensaries in the San Francisco Bay area. Oakland Councilwoman Desley Brooks; Councilman Lee Pierce, of Santa Rosa; and Councilman Mike Rotkin, of Santa Cruz, each said their cities benefited by allowing dispensaries to operate. They said creating the dispensaries had not increased crime as critics feared and had actually decreased street drug trafficking, improved security in surrounding areas, and sponsored economic growth in some spots. Rotkin, a five-term councilman and former mayor of Santa Cruz, said the city had created regulations allowing for two dispensaries over the last 18 months - making sure to create zoning that would keep them away from schools residential neighborhoods. He said residents howled "not in my backyard" when the issue was debated but that the dispensaries had proved very successful.

Science news: New phase III trials of GW Pharmaceuticals in Europe and North America, including for this first time in the USA. It is expected that phase III clinical trials with Sativex, a cannabis extract (an under-the-tongue spray) produced by the British company GW Pharmaceuticals, will begin in the United States later this year.  GW was supported by the consulting firm Apjohn Group, hired  by GW in early 2005 to help bring the drug closer to clinical trials in the US. Current trials are targeted at patients with advanced cancer whose pain has not been relieved by opioid medications like morphine, according to GW. In the meantime, the first cannabis-based medication for MS has been filed for approval by British regulators: Sativex can now be given on a named-patient basis. But the company is applying to regulators across Europe for a licence to make it more widely available.