Legal pot advocate Jack Herer died at the age of 70

Proselytizer for Legal Pot Jack Herer, an energetic advocate for marijuana legalization who was a mesmerizing presence on the Venice Boardwalk and achieved worldwide renown after he wrote a treatise extolling the virtues of hemp, died April 15. He was 70. 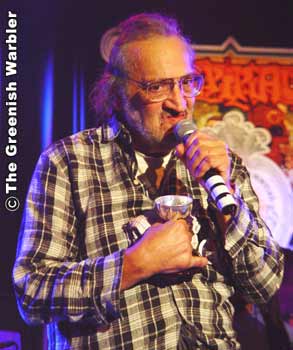 Legal pot advocate Jack Herer died at the age of 70.

Herer suffered a debilitating heart attack in September, minutes after he delivered a typically pugnacious pro-pot speech at the Hempstalk festival in Portland, Ore., insisting that marijuana ought to be smoked morning, noon and night.  "You've got to be out of your mind not to smoke dope," shouted Herer, dressed in a green short-sleeved shirt and shorts made from hemp.  "It is the best thing the world has ever had." He never recovered and died at home in Eugene on tax day.  "Dad has not filed taxes in over 30 years, so it was wonderful he died on tax day, it really was," said his son Mark Herer, who is the president of The Third Eye, the family's smoke shop and hippie wares store in Portland.

Herer researched and wrote an exuberant book that became the bible of the movement to legalize hemp, a non-psychoactive strain of marijuana.  "The Emperor Wears No Clothes," which was first published in 1985, has sold more than 700,000 copies.  In it, Herer wields extensive documentation to ridicule the government's ban on hemp cultivation and to highlight the plant's versatility as paper, fiber, fuel, food and medicine.

The book made Herer into one of the most recognizable figures in the marijuana movement and converted him into a pop icon memorialized by a strain of cannabis.  For decades, Herer, known as the Emperor of Hemp or the Hemperor, crisscrossed the country, rhapsodizing about the wonders of weed.

Science: Was there a whiff of cannabis about Jesus?

Claims of drug use by biblical figures surprisingly have susbtance, says Professor Carl Ruck. Was Jesus a Stoner? is the mischievous title of an article about the use of cannabis in ancient Judaism in next month's High Times, a pro-cannabis magazine.

Its author, Chris Bennett, likes to shock. He is the host of Burning Shiva, a show on Canada's Pot-TV, and an advocate for the medical use and decriminalisation of marijuana. Bennett first looked at the use of drugs in religion two years ago in his book Sex, Drugs, Violence, and the Bible. He postulates that Jesus's ministry was fuelled by mind-altering substances, that he may have used cannabis-based oils to heal eye and skin diseases and that his very name - Christ - derives from being anointed with cannabis-enriched oil.

USA: California Support for Pot Legalization At 56% in New Poll

A SurveyUSA poll conducted this week for a consortium of California television stations showed majority support for marijuana legalization. An initiative that would do just that, the Regulate, Control, and Tax Cannabis Act of 2010, will be on the ballot in November.

The poll found that 56% of those surveyed responded affirmatively to the question, "Should the state of California legalize marijuana?" That's the same number as supported legalization in a Field poll a year ago this month. In this week's poll, only 42% answered negatively, with 3% undecided. People under 35 supported legalization by a margin of three-to-one (74%-25%), with support declining to 46% among the 35-to-49 age group, rising to 49% among the 50-64 group, then declining again to 39% among those 65 and older.

Among all voters under age 50, support was at 61%, while among those over 50, it dropped to 46%. The poll revealed a significant gender gap, with 65% of men supporting legalization, while a dramatically lower 46% of women supported it. That means legalization supporters will have to work to win over a key demographic. There was majority support for legalization among all ethnic groups except Hispanics, of whom only 45% wanted to free the weed.

Support was highest among blacks (67%), followed by whites (59%), and Asians (58%). Somewhat surprisingly, there was majority support for legalization in all regions of the state, although only barely, except for the San Francisco Bay area, where support was at 65%. In Central California and the Inland Empire, support was at 54%, and in the Greater Los Angeles area, support was at 52%. The poll involved interviews with 500 adults across the state. It has a margin of sampling error of plus/minus 4.4%.

Canada: Poll Finds Majority Still Want to Legalize Marijuana, But Not Other Drugs

Marijuana legalization continues to garner majority support in Canada, with 53% of respondents to a new Angus-Reid poll saying they supported legalization. That figure is unchanged from the previous Angus-Reid poll on the issue two years ago. Support for legalization was highest in pot-producing British Columbia (61%), neighboring Alberta (59%), and Canada's most populous province, Ontario (57%).

Legalization had less than majority support only in the Atlantic provinces (47%) and the prairie provinces of Saskatchewan and Manitoba (34%). But while supporting marijuana legalization, Canadians also indicated they support many of the Conservative government's anti-drug proposals. Most non-controversially, 83% supported introducing a National Drug Control Strategy with media campaigns aimed at stopping young people from using drugs. Even the government's draconian mandatory minimum sentence proposal for marijuana growers and drug dealers won 70% support.

Medical marijuana advocates in Wisconsin have been working for a decade to get a bill passed there, and now they will have to wait at least one more year. The legislative session ended Thursday without the Assembly taking a vote on a bill that had already passed the Senate. Rep.

Mark Pocan (D-Madison), one of the main sponsors of the bill, issued a statement saying the bill would not go to the Assembly floor. "It is disappointing to many of us, myself included, that the legislature did not pass medical marijuana this session," he said. "But as I have assured the patient advocates, our efforts enjoyed many successes this year and we came closer to our goal than ever before. This fight is far from over because this issue is far too vital for too many people."