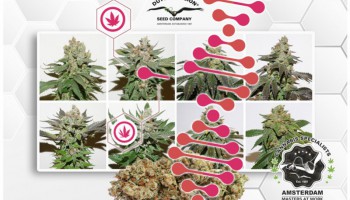 Ever harvested a cannabis strain that was simply so good, that you want to grow it again with exactly the same result? Then, on a subsequent harvest you find yourself surprised to find the latest crop looks slightly different to the previous grow. The sativa bud structure that you once enjoyed may have slightly chunkier indica-leaning flowers. It’s the same cannabis seed, so what’s going on?

What are cannabis phenotypes or phenos?

Two factors influence the way any cannabis plant grows, the genetics and environment.

The genetic composition of the plant, also called the genotype, defines the type of growth. The genotype allows the plant to express a range of different growth possibilities. But it is the specific indoor environment provided by you (or the outdoor conditions, for outdoor growers) which allows a particular type of characteristics to express and dominate.

This physical expression of a genotype is called the phenotype. This simply means the traits that the environment pulls out from the plant’s genetics. The environment, therefore, can steer various plant properties including colour, shape, smell, and resin production.

Hopefully this will increase your understanding of defining characteristics for each strain, and the various subtle differences in the weed phenotypes grown from that strain. 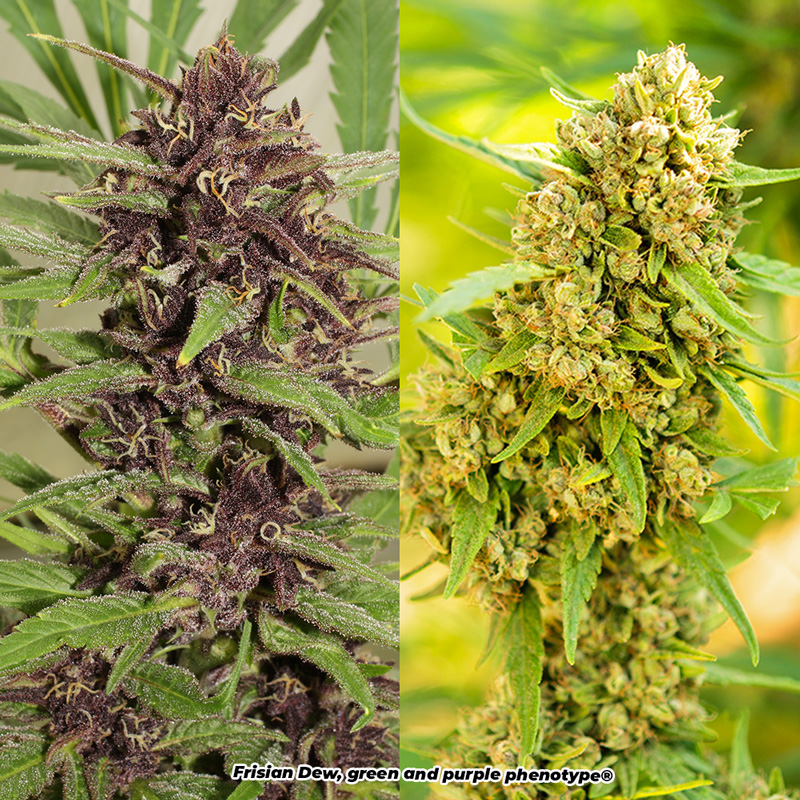 Why is phenotype used to describe cannabis strains?

As cannabis breeders have crossed these varieties it became clear that the new hybrid varieties could produce a range of phenotypes and genotypes. For some growers, having a broad selection of different phenotypes in their grow room is a great asset. The diversity provides a choice of flavours, aromas and highs. However, many growers (especially large-scale commercial growers) place a very high value on a harvest of near-identical plants and many prefer to use clones rather than seeds. 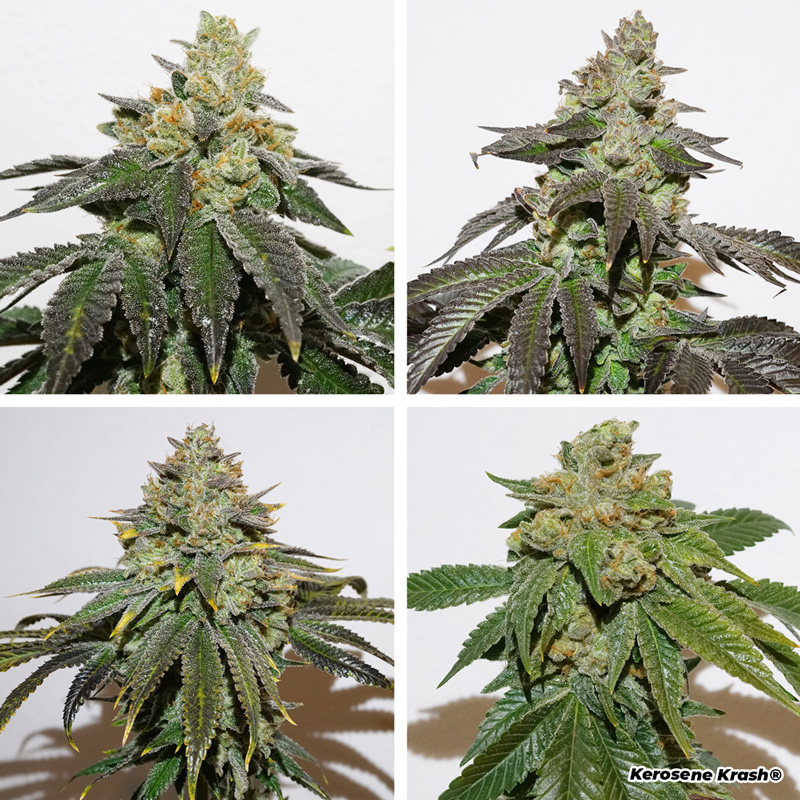 What is the difference between genotypes and phenotypes?

The genotype (genetic code) carries the essential genetic information which will control subsequent growth and appearance of the cannabis plant. The genotype is not a rigid and unmovable set of genetic instructions which the cannabis plant must obey at all costs. It’s more accurate to think of the genotype as the basic genetic boundaries which define a range of possibilities. The growing environment which you give the plant defines which specific parts of the genotype will be available for use. 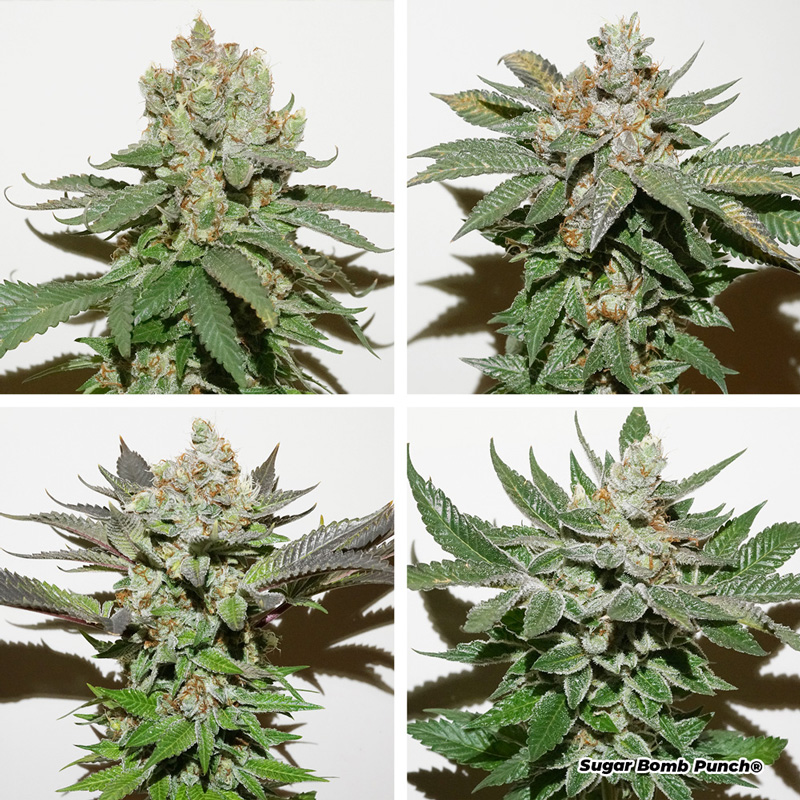 A Blueberry feminised seed could grow into a plant which will produce beautiful blue hues on the buds and leaves in your outdoor garden. But the exact same seed, if it were grown indoors with higher temperatures may never express those colours. The way the Blueberry seed grows, the environment provided and the interactions between the plant and the environment are the factors which determine the phenotype.

Although the Blueberry genotype carries the genetic information which produces blue and purple colours in the buds, it is the environment (and specifically the temperature in that environment) which facilitates the colouration. The green and blue versions of Blueberry are different phenotypes of the same variety. Other purple varieties such as Purple #1 and Auto Blackberry Kush also show colour expressions which can be affected by environmental conditions.

A good way to think of the cannabis phenotype and how it comes about is with the following equation:

A cannabis phenotype describes the plants physical appearance/form, its developmental growth, its biochemistry and its behaviour. The phenotype of a specific cannabis strain arises from two basic factors: the genotype (genetic code) and the influence of external environmental factors. Both factors may interact, with each other further affecting phenotype.

Some genes only produce a particular cannabis phenotype in specific environmental conditions. For example, purple colouration in cooler temperatures. Some phenotypes could be the result of multiple environmental influences. As any experienced cannabis grower will tell you, the environment plays a major role in determining the overall quality, resin production, aroma, colours and size of your cannabis plant. You could have genetics for an ultra high yielding variety such as Auto Ultimate, but if the plants are grown in substandard environmental conditions the full genetic potential of the plant will never be fully achieved.

You could give identical cannabis clones to two different growers with different grow conditions. The plants produced by the growers may share the same identical genetics but could end up looking completely different to each other due to the way the environment steers and influences the plants growth. Even slight differences in the nutrient selection/use will have an effect on the plant growth and final result.

Given that cannabis cuttings can end up looking quite different when grown in different grow rooms, it should be no surprise that packs of cannabis seeds will also give different results from one grower to the next. Even when the cannabis genetics have been stabilised and back crossed professionally by a top seed company, and even in optimized grow room conditions you can still expect to see variations between seed-grown plants. 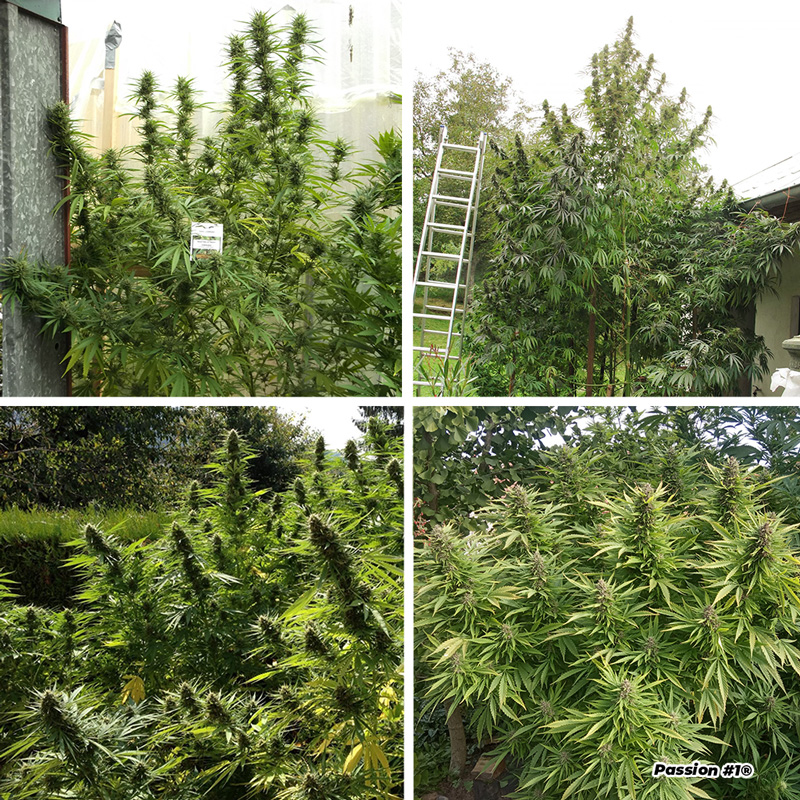 Why do my cannabis seeds grow differently even if my conditions are identical from grow to grow?

Even legal licensed cannabis producers with multi-million dollar grow rooms struggle to maintain an identical environment from one grow to the next, from one year to the next. Temperatures often vary from grow to grow due to the seasons. Humidity is another subtle factor which affects the grow environment. Grow room lighting conditions often fluctuate too, HPS bulbs start to show measurably reduced output after each grow.

Even slight variations in light intensities at canopy level affects which genetic characteristics are expressed by the plants. Growers using warehouses full of clones will note differences in yield and cannabinoid content as their environmental conditions vary from one grow to the next. Growing communities often share clones of special mother plants with each other. Usually these plants, despite identical genetics, will grow differently in soil, coco or hydro. Even cannabis clones have their final appearance steered by the environmental conditions which they experience.

What about autoflower phenotypes?

Autoflower seeds also express different phenotypes, just as feminised cannabis seeds do. When you grow autoflower seeds you can expect to see a range of weed phenotypes. It’s worth noting that autoflower seeds have a fixed life cycle. If the plants are stunted through non-optimised conditions (lack of root space, environmental extremes, poor nutrition etc) then the plant may be permanently affected. This shouldn't be confused with cannabis phenotype variation. 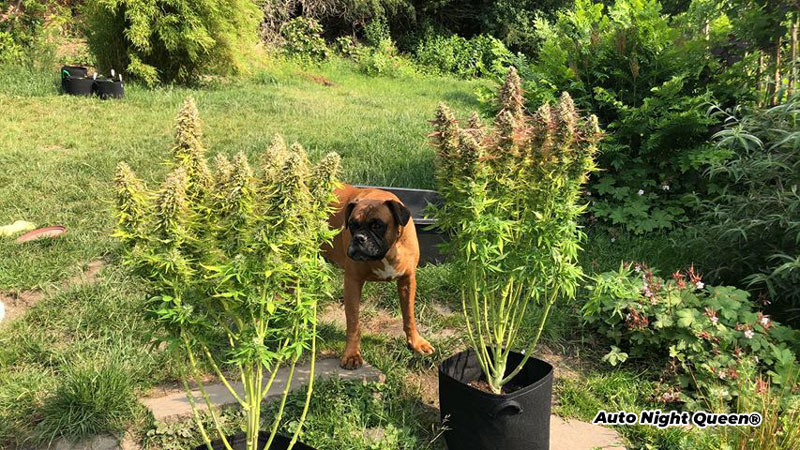 How to choose the best phenotype cannabis seeds

Simply looking at a cannabis seed won't tell you anything about the types of results you will get from it. Instead, you need to consider the competence and track record of the cannabis seed company which supplies those seeds. A good cannabis seedbank will have a decade or two of serious breeding experience behind them. They will know how to breed cannabis strains which will produce a narrow set of broadly similar plants from the same genetic source. Of course, you will see differences from one plant to the next. That’s always the case when growing from seeds. But a well-bred strain will show a tighter range of results than an unstable seed variety made with substandard breeding techniques.

Why is phenotype used to describe cannabis strains?

Ever since cannabis growers first began to grow cannabis, small differences were noticed between the individual plants. The greek word ‘pheno’ means ‘to show’. Phenotypes is a simple description explaining those variations or ‘types’.

How and when to determine phenotype cannabis 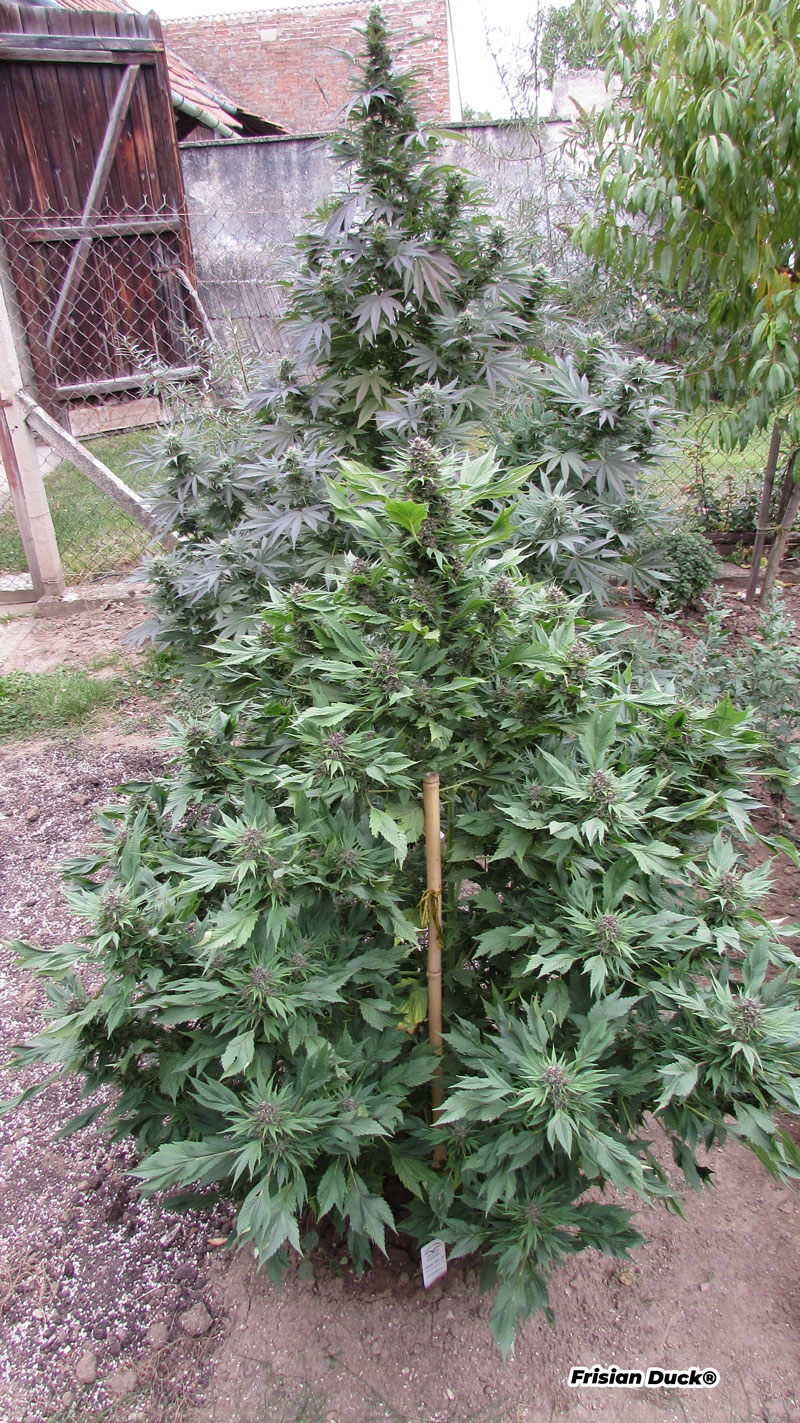 How to spot phenotype traits in cannabis

If you grow a pack of 10 feminised hybrid cannabis seeds you will probably be able to group the final plants into a few broad categories. Perhaps you will notice a couple of taller, stretchier sativa-dominant phenotypes. You may also spot a few squat, bushy and shorter indica leaning phenotypes. You may find the rest of the plants are somewhere in the middle, showing a cannabis hybrid phenotype. However, the observant grower may be able to discern a couple of different phenotypes even from those plants showing balanced hybrid phenotypes.

Is every seed a different cannabis phenotype?

Not if the breeding has been done well. A professional seedbank will have spent quite some time to back cross and stabilise their cannabis seeds to make them as consistent as possible

When breeding cannabis hybrids how many different phenotypes can be expected?

Unless you are growing from clones you can always expect several phenotypes to express themselves. With a well-bred cannabis strain you can expect around 3-4 main phenotypes from a pack of 10 cannabis seeds. Occasionally you will find unusual and rare weed phenotypes, characterised by unusual appearance, taste or aroma. Such cannabis phenotypes are often highly prized.

How do you get a purple phenotype of cannabis?

You will need to start with cannabis seeds known to produce purple blooms, such as Auto Blackberry Kush. If you use low temperatures during night hours (lights off) this is a good way to maximise your chances of getting purple cannabis phenotypes. Growing cannabis seeds outdoors, with cool night temperatures, is one way. 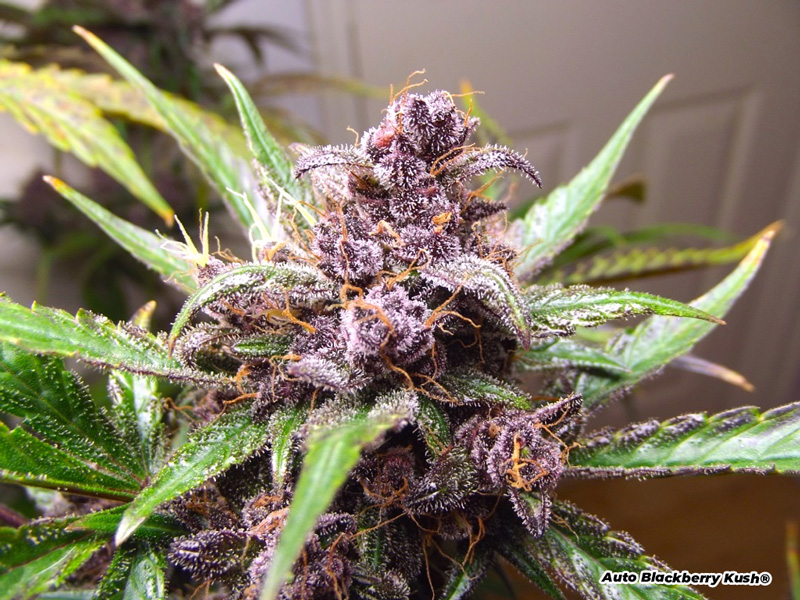 Each cannabis seed has its unique genotype which affects its response to a given set of grow room conditions (or outdoor conditions). Many growers expect seeds from the same cannabis variety to have absolutely identical genetics with identical growth. Given what we know about genotypes and subsequent growth, this expectation is misplaced.

Many growers use the term phenotype to describe the variations they get from the same cannabis seed variety. However, it may be helpful to think of them as different genotypes. That’s because it’s not just the environment which steers the expression of a certain phenotype, but also the genotype.

If you buy some cannabis seeds of a particular variety, you actually get a collection of members of the family of that specific variety. These will share very close genetics with thousands of siblings. But it’s important to understand that these are not identical siblings. The genotypes possessed in the cannabis seeds are usually very close, with small but crucial differences.

Just as human twins may share a lot of common genetics from the same parents, yet each has its own distinct personality and appearance partly shaped by the environment, diet and conditions they were given as they grew. Much like cannabis phenotypes.

Related:
What does the appearance of a cannabis seed indicate 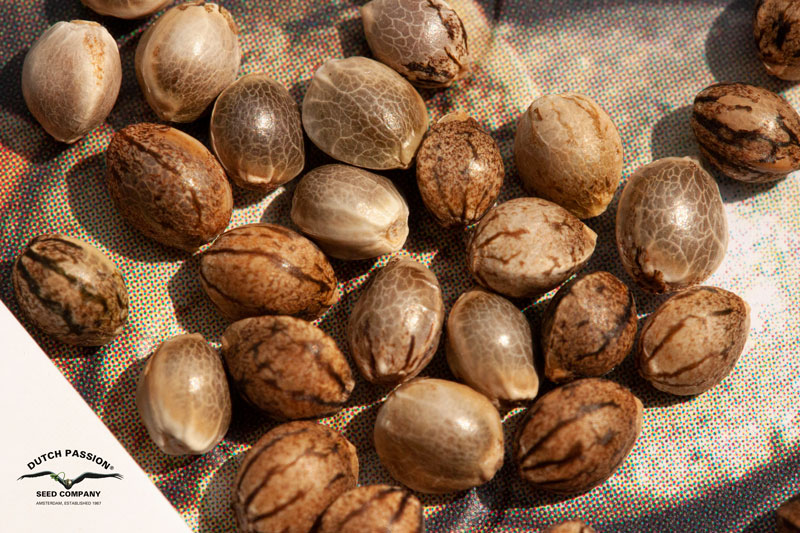 A relatively new term in the cannabis community is chemotype. As cannabis breeders started to selectively breed cannabis plants to be rich in specific cannabinoids, e.g. CBD, laboratory analysis showed that the type of cannabinoids could vary markedly.

In the future it is possible that we will see cannabis seeds which will produce plants rich in other cannabinoids such as CBD-V, CBG and others.

Optimising your grow conditions and your cannabis phenotypes

You don't know what cannabis phenotypes you will get when you start your grow. But you can maximise your chances by starting with high quality cannabis seeds from a seed company with a strong track record. You can also optimise your grow room conditions.

Growing with LED grow lights is a proven way to take your harvest quality up to the next level thanks to the optimised spectrum and reduced heat stress. You can also try simplifying your grow by switching to organics with nutrients from companies like BioTabs. This can allow you to grow without pH or EC meters, needing only add a light top dressing near the end of bloom. Not only does BioTabs make growing easier, you will also notice superior taste and aroma.

Related:
How to optimise your cannabis growing conditions 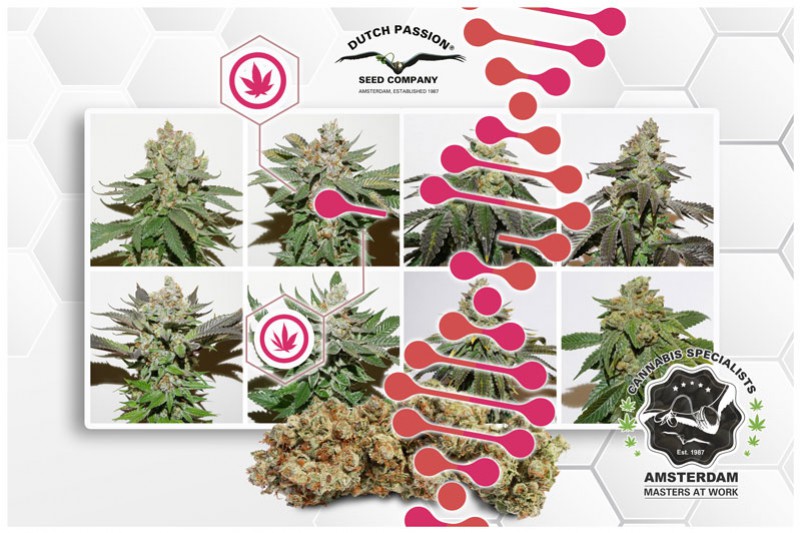