Luxembourg: Chairman of the UFCM prosecuted for the prescription of cannabis

After a recent television interview on the prescription of cannabis to patients from Luxembourg Dr. Jean Colombera, physician and member of the Luxembourgian Parliament, is prosecuted due to the violation of the narcotics law. 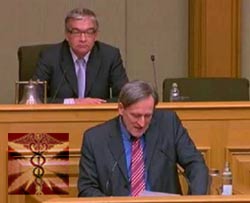 Luxembourg: Chairman of the UFCM prosecuted for the prescription of cannabis.

Dr. Colombera is chairman of the UFCM (Union Francophone pour les Cannabinoïdes en  Médecine; French Speaking Union for Cannabinoids in Medicine). He is prescribing cannabis to patients since 18 months, who get their drug (Bedrocan, Bediol) in Dutch pharmacies. The Health Minister of Luxembourg is upset by the behaviour of Dr.  Colombera. He has decided to make public his action to shed light on the actual situation, Dr. Colombera said in a statement. He is now accused to have prescribed and imported illegal substances and to have prescribed too high amounts. He is now unable to continue the prescription leaving several of his patients in a difficult and  sometimes desperate situation.

Peruvian President Alan García said Monday he is absolutely opposed to drug legalization and warned that legalizing marijuana will take society down the path toward euthanizing the elderly.  He vowed a constant fight "on all fronts" against drug use and the drug trade.

Peru is now the world's leading producer of coca, from which cocaine is made. In recent weeks, García has angled for a larger share of US drug-fighting dollars.  The stimulating herb has been used as an energy booster and hunger suppressor since time immemorial in the Andean region. García said Monday that his anti-drug efforts will focus on eradication and alternative crops, as well as interdiction and money-laundering. A reinvigorated eradication campaign has already led to renewed strife in the countryside, where tens of thousands of peasant families make a living from coca.

Two weeks ago, hundreds of coca growers seized a hydroelectric plant in Ucayali province and blocked highways in the region to protest eradication efforts. Police later regained control of the plant, but the region remains restive. "The Peruvian government has a firm position: I am absolutely against the drug legalization," García said after opening the 20th meeting of the Heads of National Drug Law Enforcement Agencies (HONLEA) of Latin America and the Caribbean. Human beings "cannot kneel before their own powerlessness," he said.

Hydro spokesperson Cindy Verschoor said that's a significant increase from the estimated $30-million revenue loss from electricity theft in 2006, the last time Hydro calculated the loss. She said it's because larger and more sophisticated grow-ops are sucking more power each year.

At the Institute of Neuroscience, Ireland, scientists investigated the effects of endocannabinoids in the pathology of Alzheimer's disease.

In Alzheimer's disease amyloid-beta is produced causing nerve cell death. They demonstrated that the endocannabinoid system can stabilize lysosomes, certain compounds within the cells, against the toxicity of amyloid-beta. They noted that "stabilisation of lysosomes with endocannabinoids may represent a novel mechanism by which these lipid modulators confer neuroprotection."

According to a report by the Cato Institute, USA, "legalizing drugs would save roughly $41.3 billion [about 30 billion Euros] per year in government expenditure on enforcement of prohibition.