Former French Polynesia President Oscar Temaru has said Tahiti should legalize marijuana to sell to European tourists and provide jobs for unemployed youth. Legalization could bring in tens of millions of dollars a year in revenues, he said in an interview with local television station TNTV.

Tahiti is the biggest island in French Polynesia, whose foreign affairs, defense, and legal system are governed from Paris. But the islands' lawmakers can change drug laws without permission from the French government. Temaru is a leading figure in Tahitian politics. As head of the five-party coalition Union for Democracy, he has served as president four times since 2004, being repeatedly ousted by parliamentary foes and then reinstalled in new elections. He is currently a member of parliament and said he plans to introduce legalization legislation later this year. 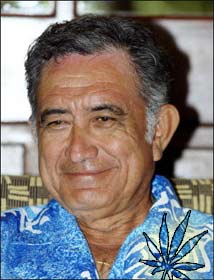 French Polynesia attracts just under 20,000 foreign visitors a year, and they bring their drug habits with them. Temaru said Tahiti should capitalize on that with pakalolo, the local term for pot. "Foreigners often arrive at out hotels and ask for paka," Temaru said. "We know there are countries in Europe that have legalized it, like Spain, Portugal and the Netherlands, so doing the same thing here could be a way of creating jobs for young people, by allowing them to sell it to foreigners," he told TNTV.

Pakalolo is already a major -- albeit subterranean -- player in the French Polynesian economy, where it thrives in the tropical climate. Police there said they seize over $110 million worth of the herb every year, but believe that represents only a "small fraction" of the trade.

USA: Maryland bills would OK medical pot sales
Legislation introduced in Maryland would legalize the sale of medical marijuana, including allowing it to be sold in drug stores. A pair of bills introduced in the state legislature would make Maryland the 15th state to legalize cannabis for medicinal use, although one of the sponsors said the rules would be more stringent than other states.

While marijuana could be sold in pharmacies as well as specialized dispensaries, users would not be allowed to grow their own and they would have to receive a recommendation from a doctor with whom they have a long-term relationship.

Other states allow patients to make a single visit to a physician, which critics contend makes it too easy. The Baltimore Sun said Wednesday that Maryland has a law in place that allows the use of medical marijuana, but makes no provision for legal points of sale. Supporters of the new laws say the current situation forces sick people to seek out illegal dealers for their supply.

USA/California: The Los Angeles City Council approved an ordinance on 26 January that will close roughly 80 percent of the nearly 1,000 medical cannabis dispensaries in the city.

Los Angeles has more of the outlets than any other city in the states that allow the use of cannabis for medical purposes. The measure would impose stringent rules on the location of the dispensaries - essentially moving them to industrial zones - and restrict their hours.

USA/California: The California Supreme Court on 21 January rejected limits on medical cannabis imposed by state lawmakers, finding that people with prescriptions for cannabis can have and grow all they need for personal use.

The high court ruled lawmakers improperly "amended" the voter-approved law that decriminalized possession of cannabis for "seriously ill Californians" with a doctor's prescription by limiting patients to eight ounces (227 grams) of dried cannabis and six mature or 12 immature plants. The Californian law of 1996 set no limits on how much cannabis  patients could possess or grow, stating only that it be for personal use.

Proponents of an initiative to make California the first state to legalize marijuana have collected about 693,800 signatures, virtually guaranteeing that the measure will appear on a crowded November ballot. "This is a historic first step toward ending cannabis prohibition," said Richard Lee, the measure's main backer. Advocates, trailed by television cameras and photographers, dropped off petitions with elections officials in the state's largest counties, including Los Angeles, where organizers said 143,105 voters signed.

Lee, a successful Oakland marijuana entrepreneur, bankrolled a professional signature-gathering effort that circulated the petition in every county except Alpine, which only has about 800 registered voters. The initiative would make it legal for anyone 21 and older to possess an ounce of marijuana and grow plants in an area no larger than 25 square feet for personal use.

It would also allow cities and counties to permit marijuana to be grown and sold, and to impose taxes on it. Four legalization initiatives have been proposed, but Lee's is the only one that is likely to make the ballot. To qualify, it needs 433,971 signatures. Elections officials have to validate the signatures, a process that will take at least six weeks. Polls have shown growing support nationwide for legalization. In California, a Field Poll taken in April found that 56% of voters in the state and 60% in Los Angeles County want to make pot legal and tax it.

USA/Science: Research into the medical benefits of cannabis is discouraged

According to an article in the New York Times the federal government discourages research into the medicinal uses of inhaled cannabis. The University of Mississippi has the only federally approved cannabis plantation. If they wish to investigate cannabis, researchers must apply to the National Institute on Drug Abuse (NIDA) to use the Mississippi cannabis and must get approvals from the Drug Enforcement Administration (DEA) and the Food and Drug Administration (FDA).

But federal officials have repeatedly failed to act on cannabis research requests in a timely manner or have denied them, according to a 2007 ruling by an administrative law judge at the DEA. "As the National Institute on Drug Abuse, our focus is primarily on the negative consequences of marijuana use," said Shirley Simson, a spokeswoman for the institute. "We generally do not fund research focused on the potential beneficial medical effects of marijuana."

The drug agency DEA told the New York Times it was just following NIDA's lead. "D.E.A. has never denied a research registration for marijuana and/or THC if NIDA approved the protocols for that individual entity," a spokesman of the authority wrote.