What is Alpha pinene? Uses and effects of this terpene found in cannabis Alpha-pinene is one of many cannabis terpenes. Terpenes are a large family of organic compounds produced by a range of plants and some insects. Terpenes often have a strong aroma. It is thought that some plants use terpenes to repel plant eating creatures or to attracting predators/parasites of the plant eating herbivores.

Alpha-pinene, sometimes written as α-Pinene is one of the more common terpenes found in cannabis. It has a pine scent which may remind you of a fresh forest aroma. Alpha-pinene is also abundant in the oils of conifer trees. Rosemary is another familiar source of alpha-pinene, as is Eucalyptus oil and Orange peel oil.

Another member of the pinene family also exists known as beta-pinene, it has a different structure but the same green pine scent. The Alpha-pinene boiling point is around 160ºC, meaning it is volatile enough to be released when you smoke or vape an Alpha-pinene rich strain.

Related:
Everything you should know about cannabis terpenes

Where can you find Alpha-pinene?

Most people associate the fresh Alpha-pinene aroma with that of pine forest. It’s found in many different cannabis strains and also the Satureja plant family which includes Rosemary and Thyme. Alpha-pinene is found in many essential oils. Because of the fresh, clean smell, many cleaning products also contain small amounts alpha-pinene. You can find alpha pinene in a range of air fresheners, perfumes, cleaning polishes and cleaning fluids.

One early method used to collect Alpha-pinene was to extract it from Pine trees. As usage has increased, synthetic industrial methods have also been used to make it. Below are a few of the more common applications for alpha-pinene.

Cannabis strains with a fresh pine terpene profile often contain Alpha-pinene at higher levels than average. Some terpene connoisseurs refer to this as Alpha-pinene weed. When you use a vaporiser to enjoy some Alpha-pinene weed you get a particularly pure and distinctively strong intake of alpha-pinene. Especially at the start of the vape.

Of course, there are usually many different cannabis terpenes present in any given cannabis strain. It is the presence of so many different terpenes which gives cannabis the complicated multi-layered aroma which so many people love and adore. But often, when Alpha-pinene is the dominant terpene in your buds, you may get a clear scent of it when you open the jar. 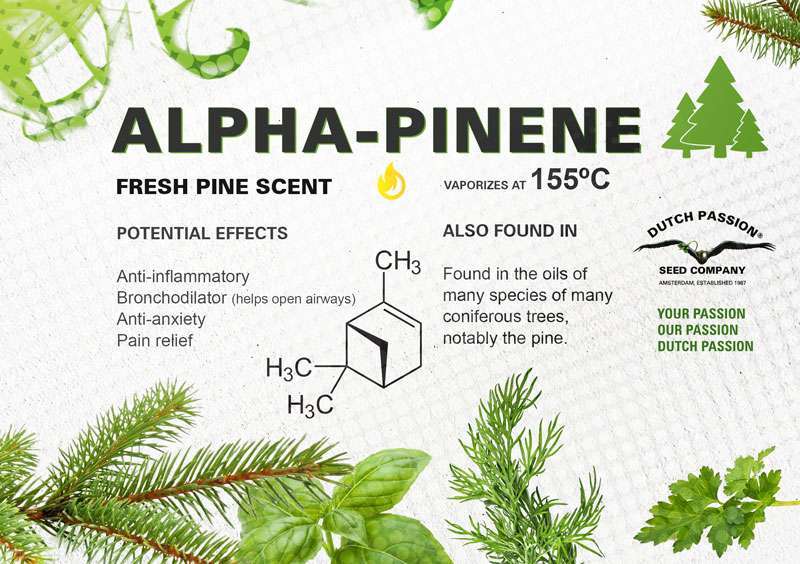 The distinctive aroma of Alpha-pinene is often described as one of the favourites for many cannabis lovers. When you smoke, or vape, some weed rich in Alpha-pinene try doing so with closed eyes and think of the first impressions to cross your mind as you savour the rich pine smell. For many, the fresh Alpha-pinene aroma transports their mind to a peaceful forest setting. Perhaps that’s why so many cannabis users have a high value for Alpha-pinene rich cannabis strains. Terpenes add a great aroma to the cannabis. Cannabis is enjoyable simply for the high, but add in a rich and tasty terpene profile and it becomes even more enjoyable.

In some societies, traditional healers have used a-pinene for centuries. To do so they would scrape bark or pine resin from coniferous trees. This was an easy source of alpha-pinene. Before modern medicines became available, healers would use this preparation to treat people with congestion or parasitic infections. Some people would also use juniper berries to make a healing tonic. Juniper berries are also a source of Alpha-pinene.

Traditionally, Alpha-pinene is most often used for the claimed anti-inflammatory properties. They are thought to be most useful for those suffering from conditions such as MS, Crohns Disease and arthritis. Many find that Alpha-pinene allows then to breathe a little easier, dilating the airways used for breathing. Others find that strains rich in Alpha-pinene may offer slightly improved anti-anxiety benefits and help amplify the pain relieving properties of cannabis.

Below are some of the Dutch Passion cannabis strains richest in alpha-pinene. These strains are available as feminised seeds or autoflower seeds. They are all THC rich cannabis seed varieties.

Auto Blackberry Kush is one of the most stunning autoflowers in the Dutch Passion collection. Some of these auto seeds produce eye-catching plants with purple/deep blue hues in the buds and leaves. It’s a fast growing autoflower, occasionally some phenotypes are ready in under in less than 70 days. Plants tend to remain short and stocky with multiple blooms. Yields are well above average. This autoflower seed suits those that enjoy powerful indica autos with great colours and a rich kush taste. THC levels are officially classed as ‘very high’ on this best selling auto. 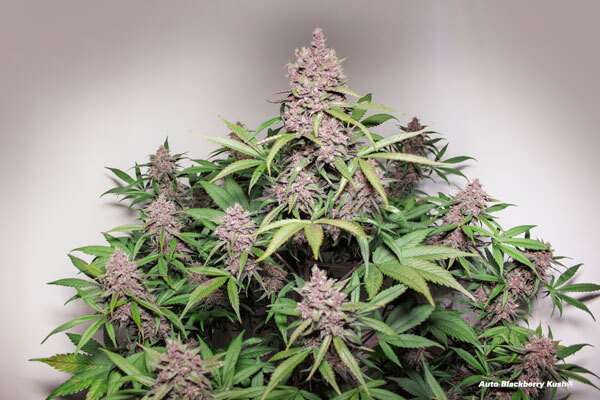 Auto Lemon Kix is the new name for an autoflowering classic. Just like Auto Cinderella Jack, Auto Lemon Kix belongs to the selection of extremely high THC strains. In good conditions you can expect THC levels above 20%. This will ensure an extremely powerful vape/smoke experience of the highest quality with a fresh alpha-pinene aroma and taste. This is another auto strain which is very easy to grow, taking around 75 days to grow indoors from seed to harvest with 20 hours of daily light.

Related:
How to grow autoflower seeds

Frisian Dew is one of Dutch Passion’s best selling outdoor feminised photoperiod seed strains. She grows well outdoors as far north as UK/Denmark, often with purple hues in the buds. Frisian Dew has been selectively bred outdoors to be able to cope with tough conditions. She needs little maintenance once planted, just select a sunny location with good quality soil and let the genetics do the rest of the work for you. Frisian Dew is ready to harvest in early autumn, usually around early October in the northern hemisphere. 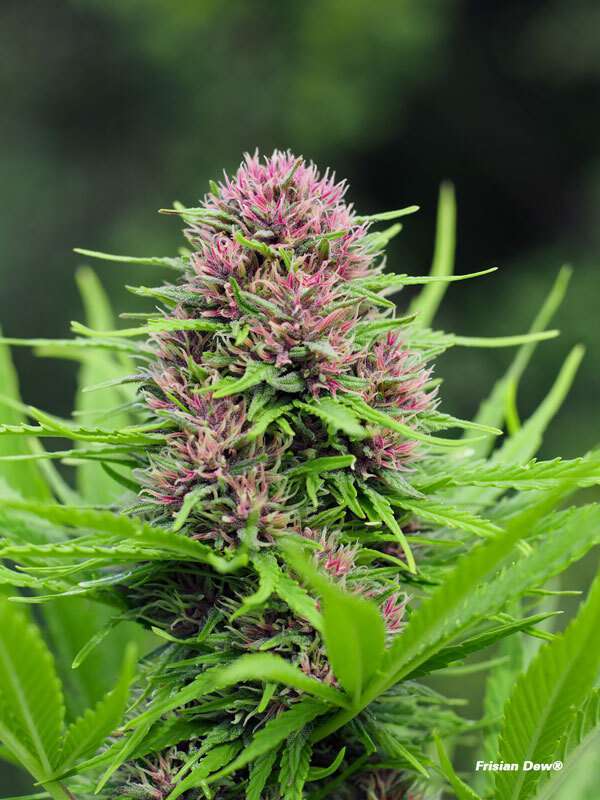 Night Queen is a particularly powerful pure indica variety, available in feminised cannabis seeds. This variety is a favourite among fans of hardcore Afghani Kush strains. THC levels are classed as ‘very high’, this variety will not disappoint! Expect a powerful high with strong physical effects. Also a very popular strain amongst medical growers.

With genetics coming from the acclaimed parents Gelato and Sherbet, Mokum’s Tulip is a classic strain with very high THC levels. The sweet scent is similar to that of a Dutch tulip, and the observant connoisseur will enjoy the pungent gelato aroma and piney tones in these sparkling, rock-hard buds. This hybrid feminised seed strain is straight forward to grow in a range of growing conditions and grow mediums. 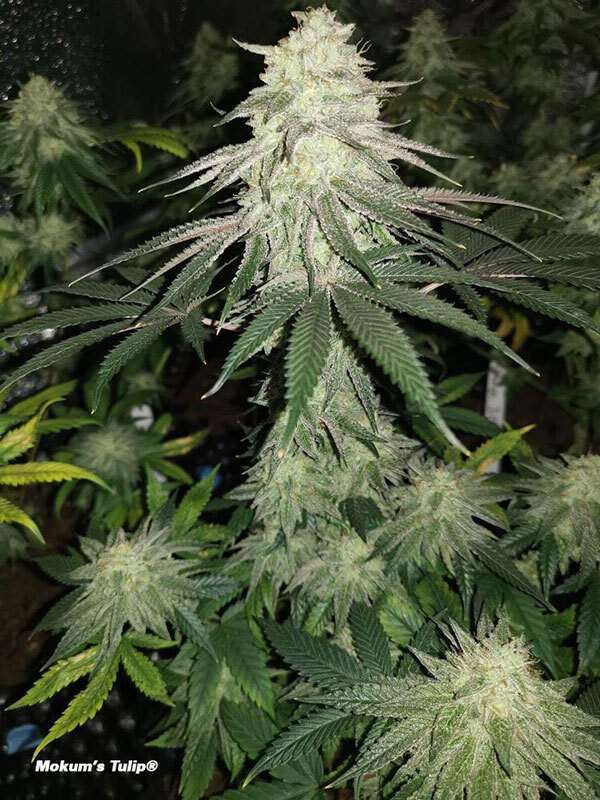 What is Alpha-pinene used for?

As a naturally occurring terpene, Alpha-pinene is regarded as a safe, natural aroma which can be added to a range of products. When you pick up the scent of alpha-pinene, one of the first sensations you smell is the fresh, clean forest aroma. Many household and industrial cleaning products contain a small amount of Alpha-pinene to leave a fresh forest smell. But in small amounts it is also used in some perfumes.

If you ever enter a room that has been sprayed with an air-freshener you will often spot the tell-tale scent of green pine from alpha-pinene. Alpha-pinene may be a valued cannabis terpene, but thanks to the appealing natural aroma it will likely be used extensively in cleaning products for many more years to come.

The alpha and beta forms of pinene are closely related to each other. They both have the same chemical formula. This means that they both have the same number of carbon, hydrogen and oxygen atoms but they are arranged slightly differently. Even though Alpha-pinene and beta-pinene are technically different compounds, they do possess many similarities including the familiar fresh pine aroma.

Entourage effects: how Alpha-pinene interacts with other cannabinoids?

Alpha-pinene, along with other cannabis terpenes are thought to contribute to the entourage effects of cannabis-based medicinal extracts. This research paper from Ethan Russo looks at the interactions between cannabinoids and terpenes which could produce synergy with respect to treatment of pain, inflammation, depression, anxiety, addiction, epilepsy, cancer, fungal and bacterial infections.

Unfortunately, the research paper is complicated with many technical terms. But essentially the research team found evidence that terpenes can modulate the effects of the cannabinoids. This may allow the terpenes to ‘steer’ the type of high. Many cannabis connoisseurs have long argued that a good cure is absolutely essential to preserve the terpene profile. A full, strong terpene profile is felt to enhance and possibly amplify certain characteristics of the cannabis high. 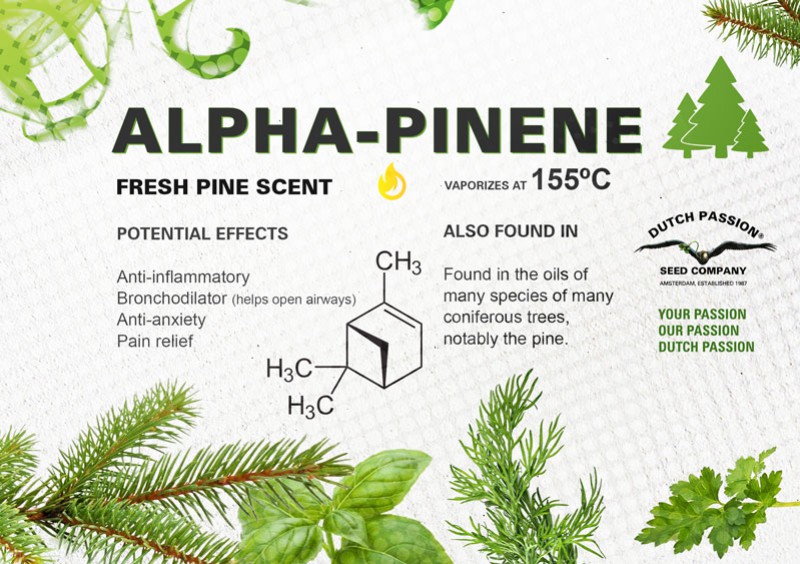