Cannabis can’t kill you. You can’t die directly from cannabis. 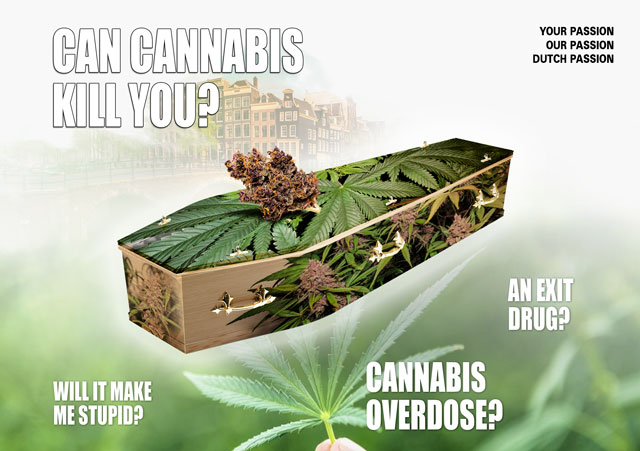 It may seem difficult to believe these days, but the early anti-cannabis propaganda such as the Reefer Madness movie labelled cannabis as a deadly, killer drug. But many decades later into the ‘cannabis epidemic’ and we have still yet to find an official death attributable to cannabis.

Judge Francis Young from the USA Dept Of Justice summarised the evidence against cannabis. He noted that there has never been a death attributed to cannabis. And in order to die from THC poisoning, Judge Young stated that a human would have to consume “nearly 1,500 pounds of marijuana within about fifteen minutes to induce a lethal response.”

The review from the Drug Enforcement Administration's chief administrative law judge recommended legalizing the medical use of marijuana back in 1988. The review was rejected, but would have allowed cannabis to be prescribed for the treatment of multiple sclerosis and nausea suffered by cancer patients in chemotherapy. Many USA patients still don’t have access to medical cannabis over 3 decades after Judge Young’s argument was rejected.

Judge Young also rejected as ''specious'' (plausible, but wrong) the argument that medicinal marijuana would encourage its use as a recreational drug.

Cannabis. Will it make me stupid?

It may be impossible to die from THC toxicity without consuming an unfeasibly large amount of it. But cannabis critics may argue that, even if it doesn’t kill you, it will at the very minimum make you stupid or slow. In medical language the argument would be that cannabis would cause increased cognitive impairment and decline. The following study followed cognitive decline in 1,318 people over a 12 year period. The people were of a range of different ages but all were under 65. The study was published in the American Journal of Epidemiology and gave the following conclusion: Cannabis. The anti-cannabis propaganda is slow to die.

Cannabis still has a reputation for death and mental destruction many years after the anti-cannabis propaganda first hit the streets. Yet there is no evidence that cannabis has sufficient toxicity to kill you. The studies indicate that you can use cannabis without putting your mind and body into an irreversible decline. Remember cannabis was first legalized for medical use in California during the mid 1990’s. Since that point the anti-cannabis prohibitionists have been scouring state data for any evidence that it is causing problems. Everything from mental health statistics to car accident data has been analysed exhaustively. And no plausible argument has emerged to worry about, or ban, cannabis. Remember also that cannabis has been used extensively by humans for thousands of years. During that time there has been no indication that cannabis can cause issues or problems. The demonization of cannabis is a modern phenomena. In fact, far from being a killer drug, many now believe that cannabis can be a way out of drug addiction and help get people free from opiates.

Cannabis. An exit drug not a gateway drug.

Anti cannabis propaganda told us that cannabis has always been a gateway drug. However, as prejudice and bias are being replaced by science a new and profoundly different role is being shown. Opiate misuse and opiate related deaths are at all time high epidemic levels. In the USA alone, opioids kill tens of thousands each year. Hundreds of thousands, probably millions, are addicted. Many feel that opiate misuse by society has happened through pressure from pharmaceutical companies, and the first pharmaceutical executives are now facing criminal charges for the opioid scandal. But cannabis has been used to great effect by those suffering from opiate withdrawal symptoms. Getting off opiates is difficult because they are highly addictive. Something the pharmaceutical companies are very aware of for future revenues. Cannabis doesn't make it easy to withdraw from opiates, but plenty of people say it makes the process less difficult. And cannabis itself is an effective painkiller, a safe alternative to opiates. Many people in legal states/countries are finding that cannabis can help as an effective painkiller in a number of different medical situations. A good review of these arguments from The Boston Globe is here. This study from the University of Georgia shows that opiate prescriptions are reduced in states with legal cannabis. This study shows that states with legal cannabis had up to 24% less opiate overdose deaths.

Cannabis overdose is impossible. But alcohol kills 3 million each year.

No-one has died from a cannabis overdose. But according to the World Health Organization, alcohol is responsible for 5% of all human deaths. That’s a staggering statistic. 3 million people die each year from alcohol. Alcohol can kill simply through toxic poisoning. A litre or two of vodka from your local supermarket would be sufficient. Failing that, alcohol can gradually weaken the body and organs, killing through various long term effects including liver cirrhosis. Society is happy to spend decades debating the legality and safety of cannabis. Meanwhile, the government-approved legal alcohol industry is killing millions and ruining the health of tens of millions. One of the great ironies about modern society is the way cannabis has been demonised. Yet the real killers are substances that seem to have been fully accepted by society such as alcohol, tobacco and opioids.