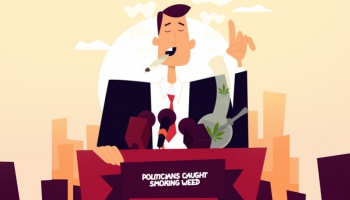 The unfairness of cannabis prohibition is one subject which unites cannabis users around the world. Perhaps most irritating of all are political leaders who maintain their opposition to cannabis despite having enjoyed using it themselves.

The typical modern politician doesn't want to see their own life damaged by a criminal record for cannabis use. But they are quite content to see others (usually young people) disadvantaged by unjust criminal records which are liberally dished out by the courts.

So who are the biggest hypocrites in our political elite? In truth every country has plenty of them, read on to find out just a few of the higher profile politicians who couldn’t resist smoking weed.

Politicians and Presidents Who Smoked Weed

The political elite of our society feel that they have good PR reasons for trying to keep their weed use private. For the rest of us however, it can occasionally be entertaining to read their versions of events and excuses.

Most importantly of all, politicians are keen to ensure that their political careers remain undamaged by criminal records. But they usually don't do anything about the rest of society being punished or jailed for cannabis offences.

Newt Gingrich smoked weed before it became immoral to do so

Newt Gingrich is a US political veteran who did admit smoking weed, though he pointed out that this was way before it became ‘immoral’ to do so. It was back in the 60’s ‘and everyone did it’. Thank goodness for that, Newt’s political record and moral values can remain absolutely unblemished.

In 1982 he wrote a letter supporting medical cannabis, a position he later reversed. Gingrich caused howls of hypocrisy when he urged the Death Penalty for importing cannabis illegally. The Drug Importer Death Penalty Act (1996), if passed, would have guaranteed thousands of executions for non-violent offenders each year. This deadly measure, which would mandate the electric chair for those caught importing over two ounces of weed, failed to pass through congress. Many commented on the irony of a death-sentence cannabis law from someone who admits he enjoyed weed during his college years.

In 1994 Gingrich hit the headlines when he accused ‘up to a quarter’ of the Clinton administration of being heavy cannabis users despite having no evidence.

Few US politicians have been as utterly confused about cannabis as Newt Gingrich. All he needs next is a lucrative appointment to the Board of Directors for a legal cannabis company and he will have travelled the full political circle on cannabis legality.

Bill Clinton admitted cannabis use though he didn’t inhale any

Bill Clinton managed a unique piece of political fence-sitting when he admitted that he smoked weed though fell short of actually inhaling any and getting high. The barely plausible story was Clinton’s official position whenever asked about it. The comedian Johnny Carson joked “That’s the trouble with the Democrats. Even when they do something wrong, they don’t do it right”.

Clinton would later be accused of having sexual relations with Monica Lewinsky. His defence team, perhaps drawing legal inspiration from his legendary pot-smoking alibi, said much depended on the definition of what is actually meant by sex.

George W Bush did admit to previous issues with alcohol and drugs but avoided public discussion on the subject, fearing it would set a bad example to younger people. Bush didn’t support cannabis legalisation and did little to assist the cause of medical cannabis during his presidency.

To his credit, Obama admitted he was a regular cannabis user from high school through to college. His book ‘Dreams Of My Father’ detailed the democrat former President’s early years. Obama was perhaps the boldest and most honest Presidential cannabis user. Unlike President Clinton who explained that he smoked ‘But didn't inhale’, Obama said he did inhale…. ‘That was the whole point’ he added. As President, Obama didn’t object to, or stop legislation at state level. But Obama also failed to take the opportunity to legalise cannabis at a federal level.

The former Vice Presidential candidate is alleged to have used cocaine and cannabis before her political rise to fame. Although she regards cannabis use as a ‘minimal problem’, in this interview with CBS News she says is against legalisation of cannabis. Palin explains that legalising weed “would just encourage especially our young people to think that it was OK to just go ahead and use it”.

This is a typical viewpoint voiced by many politicians. Confessing to having used cannabis, they believe, makes them seem more human to potential voters. Striving to maintain cannabis prohibition, regardless of their own extensive youthful pot smoking, is still viewed as a political vote winner.

Despite being Vice President of a country that regularly incarcerated people for using cannabis during his time in office, Gore was rumoured to be an avid ‘pot smoker’ in his youth. There were claims from his old friend John Warnecke that Al was a midnight smoker well into his political career. When confronted with these accusations, Gore simply said that the accusations ‘were nothing new’. It’s a way of swerving the issue without actually commenting on the accusations.

Despite careful avoidance of the issue, allegations that Gore was a serious cannabis lover continued to haunt him through his political career.

Like every other European nation, the UK has its share of political cannabis hypocrites. Usually they admit to trying cannabis ‘when they were students’. As soon as they are elected, these hypocrites usually decide it’s safer to maintain prohibition. The result is hundreds of thousands of (primarily) young people who get criminal records for cannabis possession.

Despite high level political hypocrisy over cannabis, growing your own cannabis remains hugely popular in the UK. Many people grow their own cannabis from autoflower seeds or feminised cannabis seeds.

GQ magazine recently re-published a Boris Johnson interview from 2007 where he admits trying cocaine and cannabis. Boris enjoyed his cannabis, describing it as ‘jolly nice’. Boris suffers from the political delusion that the modern cannabis is frighteningly more potent than the stuff he enjoyed. For that reason he seems to want to distance himself from any cannabis reform. Although the UK could desperately do with the £billions that cannabis legalisation would bring, politicians are still some years away from the point of publicly recognising it.

Meanwhile street gangs fight turf wars over drugs and UK stabbings reached an all-time high recently. Many feel that UK drug reform would massively undermine organised drug gangs, yet the UK has been unable to even introduce an effective medical cannabis system.

For many UK cannabis lovers, Cameron represents the typical self-serving politician. They admit using and enjoying cannabis. But if they had received a cannabis criminal record, their own political careers may never have happened.

Jacqui Smith openly admits to enjoying cannabis in the 1980’s at university. But in the finest traditions of about-turns, the politically astute Smith was keen to explain that "I am not proud about it, I did the wrong thing”. That admission came just before she was put in charge of UK drug policy. Mindful of turning a negative into a positive, Smith added that "I hope that my experiences in my life have actually helped me understand that I do want crime tackled”.

When given her top political job, as Home Secretary, she oversaw a review of cannabis. That review saw cannabis reclassified from a ‘Category C’ drug into a more serious ‘Category B’ classification. Despite having frequently enjoyed cannabis at University, Smith decided to increase the penalties for cannabis use and possession with the cannabis re-classification.

To complete her grand circle of incompetence, after her political career ended, Jacqueline Smith admitted that her decision to upgrade cannabis into a more severe ‘Category B’ was a mistake.

Smith is typical of those politicians that enjoyed cannabis as a student. Then, to further their political careers, they join the anti-cannabis brigade. Finally, looking back wistfully at their illustrious careers they decide that perhaps they were too severe in their anti-cannabis actions.

France, along with the UK and some Scandinavian countries, has been among the slowest EU countries to modernise their cannabis laws. This makes it particularly frustrating for French cannabis lovers when they hear that several anti-cannabis politicians have had reports linking them to cannabis use. Here are a few of them.

The former French Home Affairs Minister and Prime Minister was against any moves to reduce penalties for cannabis use. But during an interview he did admit that he smoked cannabis. Politicians like this allow prohibition to drag on for many more years.

Nicolas Sarkozy and the mysterious bags of weed

The former French Home Affairs Minister and President was against decriminalising cannabis in France. The scandal hit ex-President (check out the Air Cocaine reports in the French Press)

has always claimed to be completely drug-free. But a book written by the guitarist Robin Le Mesurier for Johnny Hallyday suggests otherwise. Johnny Halliday (a friend of Sarkozy and partner Carla Bruni) was quoted as saying that it “wasn't rare to see a bag of weed laying on the table whenever he used to visit Sarkozy and Carla Bruni.”

Justin Trudeau famously legalised cannabis for both recreational and medical uses in Canada. Today Canadians can enjoy their cannabis legally and have created a multi-million dollar industry complete with thousands of well paid, professional jobs. Trudeau himself has admitted to using cannabis around “five or six times” but correctly makes no apology for doing so. Trudeau represents a new breed of modern politician, unafraid to admit personal cannabis use and unafraid to rectify unjust prohibitionist laws.

The right to grow your own cannabis seeds

These days many cannabis lovers in legal (and illegal) countries grow their own weed easily using autoflower seeds or feminised cannabis seeds. Where cannabis remains illegal, the easiest and cheapest way to a low-cost supply is to grow it yourself.

Even in areas where cannabis is legally available, many connoisseurs prefer to grow it organically themselves from known genetics from high quality cannabis seeds. When done well, growing your own weed from cannabis seeds can result in superior buds to those on offer at the local dispensaries, social clubs or coffee shops.

Over recent decades politicians believed they could further their careers by portraying a strong anti-cannabis image. Perhaps that will change, allowing future politicians to feel unthreatened by some honesty about how much they enjoyed using cannabis and how they would like to improve anti-cannabis discrimination. 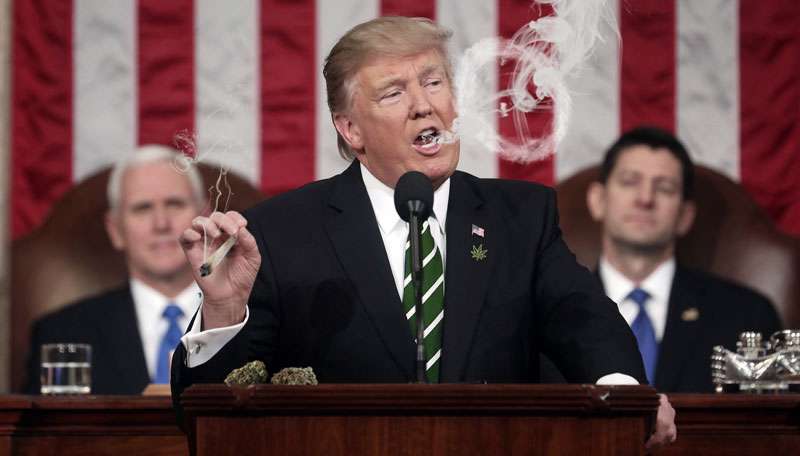 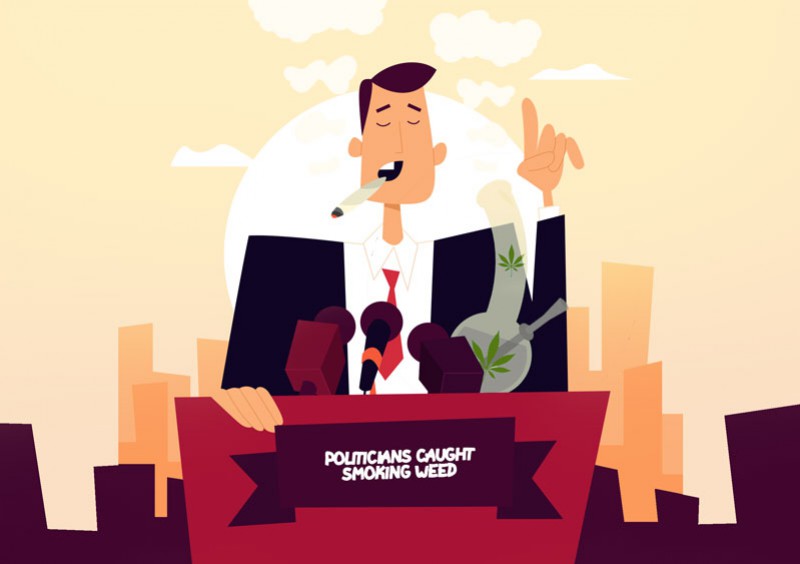