USA: Obama Seeks Increase in Drug War Spending in a Drug Budget as if on Autopilot. 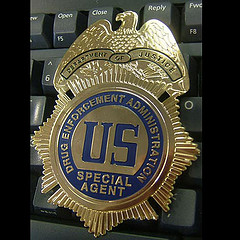 USA:  Obama Seeks Increase in Drug War Spending in a Drug Budget as if on Autopilot.

Drug law enforcement funding would grow from $9.7 billion this year to $9.9 billion in 2011, an increase of 5.2%. Demand side measures, such as prevention and treatment, also increased from $5.2 billion this year to $5.6 billion next year. "I'm a little disappointed," said Keith Stroup, founder of the National Organization for the Reform of Marijuana Laws, "but I think there is a significant difference in the environment from the Bush years. Maybe not in this budget, but things like issuing those Department of Justice regulations on medical marijuana have made a major difference."

A Kansas legislator has introduced a bill that would legalize marijuana for people suffering from chronic illnesses who have a doctor's prescription for the drug. Rep. Gail Finney, a Wichita Democrat, introduced a bill that would set up state-registered "compassionate care centers" where people with prescriptions could buy marijuana. Supporters of medical marijuana says it helps ease pain from chronic diseases.

"I just think it's the right thing to do," said Finney, who says her lupus makes her sympathetic toward those with diseases such as Parkinson's, cancer and HIV. But Rep. Scoot Schwab, a Republican from Olathe, opposes the plan. "Let's be honest, this would be an attempt to legalize marijuana," Schwab said Wednesday. "It has no benefit for pain management. All it does is make you crave another bag of chips." The bill was introduced the same week that lawmakers voted to make Kansas the first state to outlaw a synthetic form of pot, known as K2.

Medical marijuana’s support among voters in New York State is so solid that even a substantial majority of Republicans favor its legalization, according to a Quinnipiac University poll released Thursday. The poll found that 71 percent of voters supported medical marijuana, including 55 percent of registered Republicans. The poll numbers seem to confirm others cited by sponsors of the current medical marijuana bill in the Assembly.

The poll, on a range of issues before the State Legislature, also found that 75 percent of New York voters support a wage freeze for state workers to help balance the budget, while 78 percent oppose cutting state aid to schools to do so. Gov. David A. Paterson’s proposed tax on sugary sodas, meanwhile, was opposed by 57 percent of voters.