USA/Medical Marijuana: Longtime Maine marijuana and medical marijuana advocate Donald Christen is headed for prison. The Maine Supreme Court Tuesday rejected his appeal and he will have to report for an eight-month sentence soon. Christen was sentenced to 14 months, but six months were suspended. After he does his time, he will serve two more years on probation. 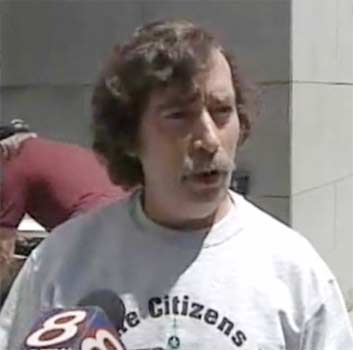 Christen was arrested after a November 2004 raid on his home in Madison in which police seized 13 marijuana plants and 22 ounces of marijuana. He was charged with two counts of aggravated trafficking in marijuana and one count of aggravated cultivation, but ultimately convicted only of the cultivation offense.

Christen had argued he "was growing marijuana legally as a designated caregiver for several people who qualified as eligible patients pursuant to Maine's medical marijuana statute." A Somerset County jury disagreed. Christen appealed, arguing that the trial judge had improperly instructed the jury regarding the applicability of an affirmative defense for medical marijuana. But in its decision, the Supreme Court held that the judge's instructions were correct.

San Francisco - Oakland pot activists fresh off a victory at local polls on the taxing of medical marijuana took their first official step Tuesday toward asking California voters to legalize pot.  A proposed ballot measure filed with the California attorney general's office would allow adults 21 and over to possess up to an ounce of pot.  Homeowners could grow marijuana for personal use on garden plots up to 25 square feet.

His group would rather wait until 2012 to build more support for a ballot initiative but would be happy with an earlier victory, he said.  Pro-legalization advocates were emboldened earlier this year by a Field Poll that found 56 percent of California voters supported legalizing and taxing marijuana.  A similar but less restrictive pot legalization initiative was filed two weeks ago by a group of Northern California criminal defense lawyers.

The Tax, Regulate and Control Cannabis Act of 2010 would set no specific limits on the amount of pot adults could possess or grow for personal use.  The measure would repeal all local and state marijuana laws and clear the criminal record of anyone convicted of a pot-related offense. Both ballot measures would be competing with a bill introduced by Assemblyman Tom Ammiano to tax and regulate marijuana like alcohol.

An abandoned mine in northern Canada may lose its role as the country's only government-approved cannabis production site. Production at the mine at Flin Flon, Manitoba, had to be moved because the facility was no longer big enough, operator Prairie Plant Systems said on 22 July.

In the mine legal cannabis had been produced for nearly a decade since Canada began allowing patients legal access to cannabis for medical reasons. No decision has been made so far on the future production site.

A measure that would remove all local penalties for possession of up to an ounce of marijuana in the Colorado ski resort town of Breckenridge will be on the ballot this November. The organizers of the effort, Sensible Breckenridge, a project of Sensible Colorado, announced Friday afternoon that the Breckenridge town clerk had certified their initiative petition as having enough valid signatures to go on the ballot.

Sensible Colorado needed 500 valid signatures to make the ballot. But in little more than five weeks of signature-gathering, they managed to collect 1,400 signatures. "While collecting signatures we encountered overwhelming support for sensible marijuana reform," said Breckenridge attorney Sean McAllister, chairman of Sensible Breckenridge. "Now it is up to the Breckenridge voters to decide if responsible adults should be criminalized for using a substance less harmful than alcohol."

The measure would remove local penalties for the private possession of up to one ounce of marijuana by adults 21 or older, effectively legalizing small amounts of marijuana for adults under the town code. The Breckenridge Town Council will have the opportunity to enact the law at their meeting on August 11. If they do not, it will automatically be placed on the November 3rd ballot.

Possession of up to an ounce of marijuana is already decriminalized under Colorado law. Denver voted to legalize the possession of up to an ounce in 2005, but that expression of citizen sentiment has been effectively undercut by local law enforcement and prosecutors, who continue to charge people under the state decrim law. A statewide legalization initiative in 2006 lost with 40% of the popular vote, but in that election, 72% of voters in Breckenridge supported it.  USA/Medical Marijuana: Colorado's state health board has rejected a move to limit the number of patients, who can be helped by medical cannabis suppliers at a time, to only five ill people.

This decision allows cannabis dispensaries to continue to distribute the drug to patients. The board voted 6-3 on 20 July to defeat the proposal by the state health department. Opponents of the five-person limit argued the  board didn't have a right to change the law passed by voters in 2000. The law made Colorado one of currently 13 states that allow the medical use of cannabis in the USA.

- Researchers of the University of Mississippi, USA, demonstrated that their method to produce many clones of a cannabis plant at a time ensured a stable genetic profile compared to mother plants.