USA  -  What can we expect from the new government in terms of drug policy changes? Clearly, the drug reform community and its allies see the change of administrations as an opportunity to advance the cause. The question is how receptive will the Obama administration and the Democratic Congress be to drug reform efforts.

"We've examined Obama's record and his statements, and 90% of it is good," said David Borden, executive director of StoptheDrugWar.org (publisher of this newsletter). "But we don't know what he intends to do in office. There is an enormous amount of good he can do," Borden said, mentioning opening up funding for needle exchange programs, US Attorney appointments, and stopping DEA raids on medical marijuana providers.

"Will Obama make some attempt to actualize the progressive drug reform positions he has taken? He has a lot on his plate, and drug policy reform has tended to be the first thing dropped by left-leaning politicians." There will be some early indicators of administration interest in drug reform, said Bill Piper, national affairs director for the Drug Policy Alliance. "We will be watching to see if he issues an executive order stopping the DEA raids; that would be a huge sign," he said.

"He could also repeal the needle exchange funding ban. The congressional ban would still be in place, but that would show some great leadership. If they started taking on drug policy issues in the first 100 days, that would be a great sign, but I don't think people should expect that. There are many other issues, and it's going to take awhile just to clean up Bush's mess. I'm optimistic, but I don't expect big changes to come quickly."

"We are hoping to see a new direction," said Nkechi Taifa, senior policy analyst for civil and criminal justice reform for the Open Society Policy Center. "We couldn't have a better scenario with the incoming vice president having sponsored the one-to-one crack/powder bill in the Senate and the incoming president being a sponsor. And we have a situation in Congress, and particularly in the Senate, where there is bipartisan interest in sentencing reform. Both sides of the aisle want some sort of movement on this, it's been studied and vetted, and now Congress needs to do the right thing. It's time to get smart on crime, and this is not a radical agenda.

As far as I'm concerned, fixing the crack/powder disparity is the compromise, and elimination of mandatory minimums is what really needs to be on the agenda." The marijuana reform groups are more narrowly focused, of course, but they, too are looking for positive change. "Obama has made it very clear on the campaign trail that he disagrees with the use of federal agencies to undo medical marijuana laws in states that have passed them," said Dan Bernath, a spokesman for the Marijuana Policy Project. "He has vowed to stop that. Obama seems to be someone who values facts and reasoned decision-making. If he applies that to marijuana policy, that could be a good thing". 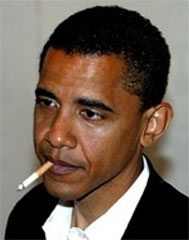 No More Felony Charges For Dirty Pipes or Syringes in Cleveland.

USA/Cleveland  -  Cleveland Mayor Frank Jackson announced Monday that people in Cleveland caught with pipes or syringes containing drug residues will no longer be charged with felonies. Under current practice in Cleveland, people caught with dirty paraphernalia are charged with felony drug possession. More than 6,000 people were arrested on felony drug charges every year in the city. The mayor said he expected the change to reduce that number by from 1,200 to 1,500.

Under Jackson's proposal, it would take three dirty needle arrests to earn a felony drug possession charge. A first drug paraphernalia arrest would be charged as a second-degree misdemeanor and a second as a first-degree misdemeanor. People charged with either of those offenses could be diverted to Cleveland's drug court. A third offense would be sent to Cuyahoga County Common Pleas Court and treated as a drug possession felony.

Jackson portrayed the measure as aimed at getting drug users into treatment without saddling them with a felony record as well as helping to improve the quality of life in the city. "If people have a couple chances, they better take advantage of it," the mayor said. "This is about helping people and stopping the behavior that is destroying our neighborhoods," he added. Cleveland is the only large city in Ohio that routinely charges paraphernalia cases as felonies. Community activists there have argued for years that since similar cases in the suburbs are treated as misdemeanors, Cleveland residents have been treated unfairly.

Czech Republik  -  The Czech lower house of parliament Tuesday approved changes in the country's penal code that distinguish between hard and soft drugs and make possession of small amounts of marijuana only a low-level offense. The reform must now pass the upper chamber and be signed by the president of the republic.

The Czech government has already issued a draft decree effectively decriminalizing the possession of small amounts of drugs, including up to 20 joints or three pot plants, 25 magic mushrooms, 0.3 grams of Ecstasy and morphine, 0.2 grams of heroin, a half-gram of cocaine, and 0.005 grams of LSD. But that draft is not yet binding on the courts. Passage of the reform measure didn't come without clashes among junior members of the ruling coalition. The Greens proposed the complete legalization of marijuana use and production for adults, while the Christian Democrats argued against any differentiation between soft and hard drugs. Both those measures were rejected.

USA  -  A pair of North Dakota farmers whose want to be able to grow hemp were in US 8th Circuit Court of Appeals in St. Paul, Minnesota, Wednesday to argue their case. Farmers Wayne Hauge and David Monson, who is also a Republican state representative, applied to grow hemp under North Dakota's hemp law but have yet to receive a permit to do so from the DEA. They filed suit in federal district court in Bismarck last year, but lost at the district court level.

The farmers and their attorneys, Joe Sandler and Tim Purdon, are appealing on a number of grounds, including the district court's ruling that hemp and marijuana are the same. The farmers argued that the scientific evidence is clear that hemp is genetically distinct from drug varieties of cannabis and that there are no psychoactive effects from ingesting it.

The DEA, which has jurisdiction over drug scheduling decisions, does not recognize any difference between hemp and marijuana. Under current federal law, anyone who grows industrial hemp for use in foods, lotions, fuels, cloth, and paper, among others, is subject to prosecution under federal marijuana cultivation statutes.

Justice Department attorney Melissa Patterson told the court that state law cannot override federal law. The Constitution gives Congress the power to regulate commerce between states, Patterson said, and that is the basis of federal drug laws. "What states do cannot expand or contract Congress's interstate regulation powers," Patterson told the judges. But Sandler retorted that that was not the question before the court.

"The question here is whether the mere existence of a plant can affect interstate commerce," he said. In an effort to allay the concerns of the appeals court panel, the farmers and their attorneys argued that North Dakota's law is so strict that their hemp could not be converted into psychoactive marijuana and that the state's monitoring of hemp fields would prevent illicit marijuana cultivation. "It would be the last place in the world that anybody would do anything illegal," Sandler said.

Switzerland  -  Swiss voters will go to the polls November 30 to decide whether to approve marijuana decriminalization and the government's ongoing "four pillars" drug strategy, which includes the prescription of heroin to hard-core addicts. A Swiss Broadcasting Corporation poll late last month showed the decriminalization effort in a virtual dead heat, leading 45% to 42%, with 13% undecided, while the referendum on the broader strategy appears headed to easy victory, with 63% in favor, 20% opposed, and 17% undecided.

The referendum on marijuana policy envisages its legalization for personal use, with its cultivation and sale being regulated by the state. It comes a decade after Swiss voters narrowly rejected a similar proposal. An attempt to decriminalize through parliament failed in 2004.

While the vote on decriminalization looks to be close, the effort is supported by a 1999 government advisory committee report and the governing coalition, and it is picking up some unexpected allies. Regulation would protect young people, argued the Social Democrats. Somewhat surprisingly, the effort is also supported by the center-right or libertarian Radical Party and the respected daily Neue Zurcher Zeitung, which described both the decrim effort and the amended drug law as steps in the right direction.