According to a poll by the Economist a majority of Americans support the legalisation and taxation of cannabis. Even without excluding  subjects who were undecided a clear majority favours treating the drug equivalently to tobacco and alcohol. 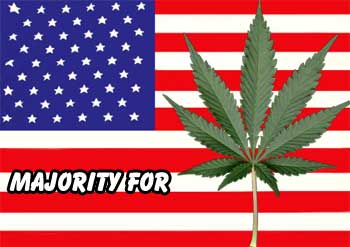 USA: A majority of Americans support the legalisation and taxation of cannabis.

Young people are very strongly in favour, but older participants are also in favour of legalisation. Breaking the poll down by party, one finds that Republicans as well as Democrats are in favour, though the former  much more narrowly so.

Researchers at the National Institute for Health and Welfare in  Helsinki, Finland, compared domestic cannabis cultivation in Denmark and Finland to describe national characteristics in small-scale cannabis growing. They conducted an internet survey with 401 participants from Denmark and 1,054 from Finland.

Cannabis was cultivated primarily for own use, but sharing with friends and  avoiding criminal circles also were significant motives for growing.  Finnish growers prioritized indoor cultivation, whereas the Danes were more in favour of open-air plantations. Growing for medical purposes was twice as prevalent in Finland as in Denmark.

Nebraksa and Utah have become the latest states to ban new synthetic drugs. Utah Gov. Gary Herbert (R) signed into law Friday HB 23, which bans both synthetic cannabinoids and mephedrone, or "synthetic cocaine." The "emergency" measure went into effect immediately upon being signed by the governor.

No more buzz from Spice or "Bath Salts" in the Beehive State. Synthetic cannabinoids are typically marketed as incense under brand names including Spice and K2. They are currently banned in more than a dozen states, with action pending in others. The DEA attempted to implement a nationwide ban as of Christmas Eve, but has so far been blocked by legal moves on the part of retailers' groups.

Lawmakers in Colorado are considering setting a driving under the influence blood-content threshold for cannabis that would make Colorado one of three states with such a provision in statute.

Under the proposal, drivers who test positive for 5 nanograms per millilitre (ng/ml) or more of THC would be considered too impaired to drive.

According to research at the University of Pavia, Italy, the  endocannabinoid anandamide improved migraine in a rat model of the disease.

Authors stated that "a dysfunction of the endocannabinoid system may contribute to the development of migraine attacks and that a pharmacological modulation of CB receptors can be useful for the treatment of migraine pain."

At the Department of Agricultural, Food and Nutritional Science of the University of Alberta, Canada a pilot study investigated the effects of THC (dronabinol) on taste and smell perception as well as appetite, caloric intake, and quality of life in cancer patients.

Adult advanced cancer patients, with poor appetite and chemosensory alterations were included in the study and randomized in a double-blinded manner to receive either THC or placebo capsules. 24 of the  participants received 2.5 mg THC twice daily and 22 received a placebo for 18 days. Twenty-one patients completed the trial.