USA: Sarah Palin admits having tried cannabis and isn’t too worried about it

During a television appearance with Rep. Ron Paul on Fox Business Network, Palin spoke of prioritizing law enforcement’s efforts: “If somebody’s gonna smoke a joint in their house and not do anybody else any harm, then perhaps there are other things our cops should be looking at to engage in and try to clean up some of the other problems that we have in society.” 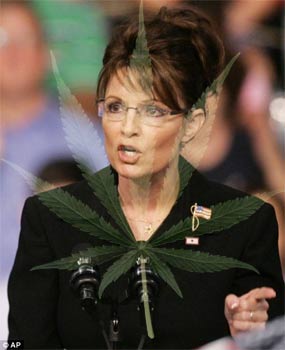 USA: Sarah Palin admits having tried cannabis and isn't too worried about it.

Palin added that, relatively speaking, pot is a “minimal problem.” Palin also admitted to smoking marijuana in the past – when pot was legal for personal use in the state of Alaska. However, Palin stopped well short of Rep. Paul’s belief that drugs should be decriminalized at a federal level. According to Palin: “I’m not for the legalization of pot … I think that would just encourage especially our young people to think that it was OK to just go ahead and use it.”

They came from San Francisco and New York, Los Angeles and London, England. They were potheads and bud-tenders, medical marijuana patients and recreational smokers, smugglers and farmers, ex-cons and lawyers, boys growing weed in mom’s suburban basement, and girl’s getting high behind their inner city high school. It was a zoo and a circus, a big pot party and a sprawling head shop, a weekend of seminars, and the sharing of new ideas about growing, and marketing, legalizing it and decriminalizing it too.

It was long overdue. And high time too that HIGH TIMES picked itself out of its fabled New York offices, and made the trek across the country to San Francisco, the city where the hippie counterculture was born in the 1960s, where medical marijuana began in the 1990s, and where getting stoned and going to Golden Gate Park, or getting stoned and going to work go together like Mayor Gavin Newsom and cocaine, or the Golden Gate Bridge and San Francisco itself.

It was inspiring to see Dan Skye, HIGH TIMES’ Executive Editor in the flesh, and to watch his PowerPoint presentation of more than 400 covers of HIGH TIMES magazine. “At HIGH TIMES, the plant itself is the star,” he said. Nico Escondido, the Cultivation Editor, was eloquent about growing marijuana in direct sunlight. “Pay attention to the science of growing,” he said. “There is no refuting it.“ From beginning to end, and for two solid days that seemed to go by in a flash, the first HIGH TIMES Medical Cannabis Cup was a big bong of a hit. It was loud, wild, sexy, and freewheeling. Outside in the sun, there was plenty of smoke to smoke – if you had a medical marijuana card. Upstairs, there were pipes and rolling papers, grow lights and T-shirts galore.

Representatives of 174 medical marijuana dispensaries have filed notices with the Los Angeles city clerk, indicating that they intend to remain open. City officials now face the daunting task of determining whether those stores qualify to operate under the new ordinance. The stores are among 187 that registered in 2007 to continue to operate when the City Council adopted a moratorium. (City officials have long said the number of registered dispensaries is 186 but recently concluded one was inadvertently left off the list.)

All other dispensaries in the city were required to stop selling marijuana June 7, when the ordinance became effective. City officials estimate there are about 400 illegal dispensaries. Many, however, have sued the city to challenge the ordinance and some have remained open in defiance of the law. Los Angeles officials are reviewing the documentation to ensure that the stores still have their original owners, have operated continuously and have moved no more than once. In their initial check, city officials determined that 79 met those requirements and planned to scrutinize the others. Control of seven dispensaries is in dispute, with competing groups claiming to operate them.

Say what you will about medical marijuana but one question is not up for debate: whether or not it would make state’s money. In late 2009, the Colorado Attorney General gave cities permission to start taxing medical marijuana and the green (not that green) has been rolling in. How much money have they made? Well, according to NBC affiliate 9News, the city of Denver raised revenues of over $1 million in only five months.

“The numbers are from a period stretching from December to April. During those five months, the city collected $1,023,308.67 from the various medical marijuana businesses scattered around the city. In March, the city collected $226,492.56, the highest reported collection to date.”

While the article and report point out that this is still a small portion of the state’s revenue, it’s definitely a check that Colorado will be happy to deposit. And, in these cash-strapped times, don’t think that other states preparing to write medical marijuana legislation aren’t hungrily eyeing those figures. Whether or not this will lead to full on legalization in Colorado or any other state will remain to be seen but, it’s possible that those impassioned predictions your burnout college roommate made all those years ago might finally be coming true.

Certified Distributors In Short Supply, Experts Say - A shortage of medical marijuana means who use it might not be able to get the relief they need, KOAT-TV in Albuquerque reported. One man, who requested his identity to be concealed, runs a nonprofit group that counsels medical marijuana patients.

He said there are around five medical marijuana distributors in New Mexico and almost 2,000 patients. He claims distributors can't keep up. "They say they can handle up to 100 people, when in actuality one dispensary can only handle about 40 people. Actually, 35 max, let's be honest," he said. Experts in the field said that if medical marijuana patients can't get what they need from a certified distributor, then there is a concern they'll go somewhere else to get it. "People get it off the streets, and that's unsafe," said the counselor. New Mexico started its medical marijuana program in 2007. Some say the state office is underfunded and understaffed, leaving potential patients and distributors in limbo.


Canada: Bylaw targets grow-ops
The City of Prince George is developing a bylaw to crack down on landlords who allow marijuana growing operations or clandestine drug labs on their property. The city council directed city staff to develop the bylaw, which will hold the landlords accountable for the RCMP costs of removing material and equipment from the grow ops and drug labs; and the costs of inspecting the buildings for safety, health and fire code violations.

"We're already doing inspections on properties, after the fact, as police find them.  This would allow us to recoup those costs," bylaw services manager Guy Gusdal said.  "Most of the Lower Mainland have these ( bylaws ).  Certainly they've been effective in dealing with the problems." City health, safety and fire inspectors have inspected the sites of approximately six marijuana grow operations already this year, Gusdal said. Information on what those inspections have cost the city is not available, he said, but depending on the level of damage to the home they can be extensive and time consuming.

Mould, substandard wiring, structural changes to the building, spilled chemicals and other hazards are common in marijuana grow operations and clandestine drug labs. Council also directed administration to prepare a policy to register on the property title that it was used as a grow op or drug lab.

City council has that authority under the community charter, but must receive a report from the inspector and approve the title notification on a case-by-case basis. The bylaw will also allow the city to request electricity consumption information from B.C.  Hydro.  Homes or buildings which have unusually-high consumption may be inspected to determine the cause, Gusdal said.

The RCMP can get a warrant to request that information about specific properties, Gusdal said.