USA: Rhode Island has become the third state of the USA to permit cannabis sales to chronically ill patients with an approval for the medicinal use of the drug. On 16 June lawmakers voted to override a veto from governor Donald L. Carcieri. The new law allows up to three non-profit stores in the state to sell cannabis to patients registered with the state Department of Health.

The drug remains illegal under federal law, but President Barack Obama's administration has said it will not target stores that comply with state law. Rhode Island began allowing chronically ill  patients to possess cannabis in 2006 but never created a legal  means to buy the drug. California and New Mexico are the other two states that allow the sale of cannabis for medicinal purposes. There are 13 states in the US that allow the medicinal use of cannabis. Carcieri vetoed identical House of Representatives and Senate bills on 12 June saying legalizing the sale of medicinal cannabis would increase use for non-medical purposes and hurt children. 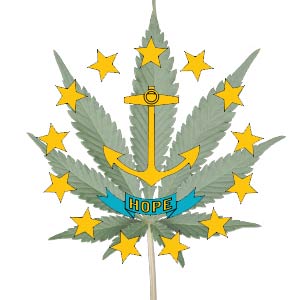 USA: US Congressman Mark Kirk is calling for prison sentences of up to 25 years for trafficking even small quantities of the marijuana.

Rep. Mark Kirk (R-IL) Monday introduced a bill that would dramatically increase prison sentences for marijuana trafficking offenses if the pot in question had THC levels over 15%. Warning Monday that "kush super-marijuana" had invaded the Chicago suburbs, Kirk is calling for prison sentences of up to 25 years for trafficking even small quantities of the kind bud.

Under current federal law, the manufacture, distribution, import and export, and possession with intent to distribute fewer than 50 kilograms or 50 plants is punishable by up to five years in federal prison, a $250,000 individual fine and $1 million group fine. Kirk's bill, the High-Potency Marijuana Sentencing Enhancement Act (HR 2828) increases the maximum fines for high-potency pot to $1 million for an individual and $5 million for a group, as well as increasing the maximum prison sentence five-fold.

A second offense would double the fines and increase the maximum sentence to 35 years. In a press release announcing the bill, Kirk warned of "zombie-like" pot smokers stumbling around the Chicago suburbs. "According to the National Survey on Drug Use and Health, more than 25 million individuals age 12 and older used marijuana in 2007 -- significantly more than any other drug," he said. "That's why Kush and other high-potency marijuana strains are so worrying. Local law enforcement reports that Kush users are 'zombie-like' because of the extreme THC levels.

Drug dealers know they can make as much money selling Kush as cocaine but without the heavier sentences that accompany crack and cocaine trafficking. Higher fines and longer sentences aren't the total solution to our nation's drug problem. But our laws should keep pace with advances in the strength and cash-value of high-THC marijuana. If you can make as much money selling pot as cocaine, you should face the same penalties." Bruce Mirken, communications director of the Marijuana Policy Project, said, "I don't know what's more ridiculous about this, Kirk's incredible scientific ignorance or the hypocrisy of a man who's taken thousands of dollars from the alcohol and tobacco industries going after marijuana."

New Zealand: A man briefly lit up a cannabis joint in Parliament before being nabbed by security.

The man lit the joint in the public gallery about 5.30 pm during the second reading of the Resource Management ( Climate Protection ) Amendment Bill. He was quickly grabbed by security and removed.  There was no indication it was any sort of protest, said Parliamentary Services spokesman Warren Inkster.

In an interview a lead researcher on the effects of cannabis smoking on the lungs speaks out against criminal sanctions of cannabis users. "Early on, when our research appeared as if there would be a negative impact on lung health, I was opposed to legalization because I thought it would lead to increased use and that would lead to increased health effects," Dr. Donald Tashkin, a professor at the University of California in Los Angeles, says. "But at this point, I'd be in favor of legalization.

I wouldn't encourage anybody to smoke any substances. But I don't think it should be stigmatized as an illegal substance. Tobacco smoking causes far more harm. And in terms of an intoxicant, alcohol causes far more harm."   Science: Aging - In basic research it was demonstrated that cannabinoids attenuate the effects of aging upon inflammation and new formation of nerves. For example, activation of cannabinoid receptors triggered the formation of new nerve cells in the hippocampus (a brain region) in aged rats.

It was demonstrated in cell experiments that activation of the CB2 receptor in glial cells is capable of inducing the removal of amyloid beta from human tissue. CB2 receptors are almost absent in the brain in normal conditions but are increased in number in glial cells in chronic inflammation, as in Alzheimer's disease.

Amyloid beta is the main component of amyloid plaques in Alzheimer's disease and its removal is currently considered as one of the most promising experimental approaches for the treatment of this disease.