USA: President Obama signed a law that lifts the ban on the

On 16 December President Barack Obama signed a bill into law that was past on 13 December by the U.S. Senate that clears the way for the government of the District of Columbia (Washington D.C.) to allow the medical use of cannabis. In 1998, voters of the District overwhelmingly approved a ballot measure that would allow for the possession, use, cultivation and distribution of cannabis if recommended by a physician for serious illnesses. 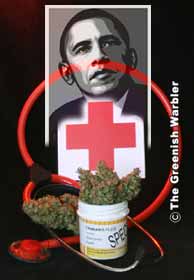 USA: President Obama signed a law that lifts the ban on the
medical use of cannabis in Washington D.C.

The law passed with 69 percent of the vote in 1998, but before it took effect, the U.S. Congress passed legislation banning the practice in the District. The District would join Alaska, California, Colorado, Hawaii, Maine, Michigan, Montana, Nevada, New Mexico, Oregon, Rhode Island, Vermont and Washington in allowing medical cannabis. It is expected that the use of cannabis by patients may be allowed by the end of 2010. Washington, D.C., formally the District of Columbia and commonly referred to as Washington or the District, is the capital of the United States, and should not be confused with the state of Washington. The District of Columbia does not belong to a state but is a single entity.

A highly placed Jamaican lawmaker called over the weekend for the decriminalization of marijuana possession. Sen. Dennis Meadows, deputy secretary general for the governing Jamaica Labor Party, made the call before parliament Friday and elaborated on it Saturday.

On Friday, Meadows told the Jamaican Senate that arresting and convicting people for possession of small amounts of marijuana "is only serving to criminalize our already marginalized young men and women, thereby creating a reservoir of hopelessness." Prosecuting people for possessing a spliff is also a waste of valuable law enforcement resources, he said. "Decriminalization, among other things, will serve to free up the police resources and the already stressed justice system to focus on more serious crimes," Meadows insisted.

Meadows cited the 2001 National Commission on Ganja report, which also called for decriminalization. Although that report was presented to parliament and then Prime Minister PJ Patterson, movement toward decrim withered under loud US protests. Debate on the report should be reopened, Meadows told his colleagues. On Saturday, Meadows issued a statement reiterating his stance. "What I am advocating is that ganja, at the level of spliffs for private use, be treated similarly to a traffic ticket," Meadows said. That would be a good start for one of the most marijuana-friendly cultures on the planet. Let's see if the rest of Jamaica's political class is listening.

USA: Next year the citizens of California may decide on whether to legalize cannabis for personal use.

With California teetering perpetually on the edge of financial ruin, cannabis activists have seized the moment, claiming that legalizing and taxing cannabis could help the state. But critics are slamming the proposal, saying the social costs of legalization outweigh the money it would bring in. Voters are likely to confront the issue next year.

Cannabis advocates say they have collected more than enough signatures, over 680,000, that such a bill will be on the ballot in November 2010. According to this proposal California would become the first U.S. state to legalize possession and cultivation of cannabis for recreational use. Under this initiative, simple possession of an ounce (28.5 grams) or less of cannabis would be legal for anyone at least 21. It also would be lawful to grow limited amounts in one's own home for personal use. The state tax board found that California could collect 1.4 billion Dollars (about 1 billion Euros) a year in taxes from a legalization bill proposed by Assemblyman Tom Ammiano, a San Francisco Democrat.

According to research by Italian scientists essential oils from three hemp varieties significantly inhibited the growth of microbes.

They noted that "essential oils of industrial hemp, especially those of Futura, may have interesting applications."