USA  -  George Obama, 26, was arrested on 31 January 2009 for possession of marijuana, after allegedly being caught with a single joint of "bhang" near his home in a Nairobi slum.  There was no suggestion that Obama was trying to deal in the drug but, according to Joshua Omokulongolo, the area police chief, rules are rules.  "He is not a drug peddler," said Omokulongolo, "But it's illegal, it's a banned substance." 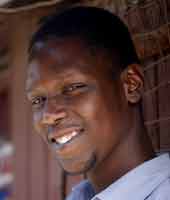 According to CNN, George Obama disputed the charge.  "They [the police] took me from my home," he said.  "I don't know why they are charging me." The episode is the latest sad chapter in the life of George Obama, who has largely lived in poverty while his increasingly famous half-brother made his way from Harvard to the Senate and then the White House.

While he shares the same father as the US president, he barely knows him and did not attend the inauguration with other Kenyan relatives in Washington last month. While he is poor and lives in ramshackle accommodation, George is in the same position as well over a million other people who live in Nairobi's slums.  Before the US presidential election, he said that he saw no reason why Barack Obama should support him financially; he was content with his life and could provide for himself.

That did not stop Jerome Corsi, the right-wing US author of The Obama Nation, from travelling to Kenya in the hope of presenting a $1,000 cheque to George.  Fortunately for Corsi, whose stunt was unlikely to have gone down well in Huruma, he was quickly deported.

USA: Edward H. Jurith, the longtime lead lawyer for the White House Office of National Drug Control Policy (ONDCP), has been named the interim director of the agency by President Barack Obama.

In July 2001, Jurith said "The 2000 DAWN report shows the undeniable health consequences of substanceabuse. Drugs often touted as harmless, such as marijuana and Ecstasy, are obviously dangerous and addictive, and the numbers prove it.” So expect the worst…

USA  -  The New Mexico Department of Health issued its long overdue regulations for state-licensed, nonprofit medical marijuana providers, making it the first state to do so. Advocates say the new rules will allow for expanded access to medical marijuana for qualified patients. Not everyone is happy.

The process was long and involved, with numerous state agencies and law enforcement entities, as well as patients and advocates all trying to ensure that their interests and concerns were met. Originally mandated to be done by October 2007, the regulations were only finalized this month, with the Department of Health making late revisions based on public comments to earlier versions. Under the newly promulgated regulations, nonprofit providers can grow no more than 95 plants, including both mature plants and seedlings, and can possess an amount of medical marijuana "that reflects current qualified patient needs."

The nonprofits must sell medicine at constant unit prices and without volume discounts. In order to apply for provider status, the nonprofits must provide copies of their articles of incorporation and bylaws, a list of all people involved in operating the facility, a list of all people who have a 5% or greater ownership in the facility, and have a board of directors that includes at least one health care professional and three qualified New Mexico medical marijuana patients. All of these people must also undergo a criminal background check.

Afghanistan: US Commander Orders NATO to Kill All Drug Dealers

Afghanistan  -  According to the German news magazine Der Spiegel, top NATO commander in Afghanistan, US Gen. John Craddock, has issued a "guidance" allowing NATO troops "to attack directly drug producers and facilities throughout Afghanistan." But other NATO commanders do not want to follow that order, leading to a rift at the top of the allied war machine over who is a legitimate military target.

The NATO has reluctantly embraced an expansion of its mission from fighting the Taliban and related insurgents to going after drug trade participants linked to the insurgents. But Gen. Craddock's directive broadens the mission to include any drug traffickers or drug production facilities. According to the document, a copy of which Der Spiegel says it has, NATO troops can now use deadly force against drug traffickers even when there is no proof they are engaged in armed resistance to NATO/US troops or their Afghan government allies.

But that's not what NATO countries bargained for in October, when they agreed to allow NATO soldiers to attack opium traffickers linked to the Taliban. It is "no longer necessary to produce intelligence or other evidence that each particular drug trafficker or narcotics facility in Afghanistan meets the criteria of being a military objective," Craddock wrote. The alliance "has decided that [drug traffickers and narcotics facilities] are inextricably linked to the Opposing Military Forces, and thus may be attacked."

Bolivia  -  The last U.S.  Drug Enforcement Administration agents left Bolivia on Thursday after having been ordered out by President Evo Morales, even as Bolivian police report that coca cultivation and cocaine processing are on the rise. Morales demanded the DEA's exit in November as part of a bitter dispute between U.S.  and Bolivian officials that included his expulsion of U.S.  Ambassador Philip Goldberg and the Bush administration's decertification of Bolivia's anti-drug effort.

The departure in recent weeks of three dozen agents ends the DEA's presence here after more than three decades.  Senior law enforcement officials said it was the first time a DEA operation had been ordered out of a country en masse. Officials in the DEA's office here declined to comment before leaving, although officials said this week that all of them would be reassigned to countries bordering Bolivia to continue monitoring the situation here. During the agency's 35-year history, it has generally maintained good relations with host Latin American nations, which take advantage of its global intelligence network and training programs in the United States to fight traffickers. Recent exceptions include Bolivia, where Morales has accused the DEA of engaging in espionage.  Similar charges were leveled by Venezuelan President Hugo Chavez, who has reduced the DEA's presence from 10 to two agents since 2005 by refusing to renew agents' work permits.