USA: No cannabis legalization in California

USA/California: On 2 November Californian voters decided not to make cannabis legal in the state.

The California initiative, which would have allowed adults age 21 and older to possess and grow small amounts of cannabis, failed 54 to 46 percent. 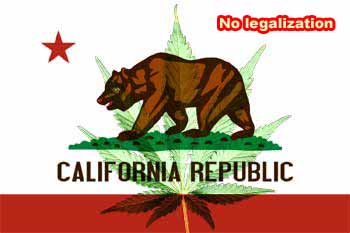 USA: No cannabis legalization in California.

California voters rejected Proposition 19, the tax and regulate marijuana legalization initiative, by eight percentage points, but a post-election poll has found that they still favor legalizing pot. The poll also suggests that if youth turnout had equaled that in 2008, the campaign to free the weed would have ended in a dead heat. According to the poll, which was conducted by Greenberg Quinlan Rosner, 52% said marijuana prohibition does more harm than good. And 49% said marijuana should be legalized, with 41% opposed and 10% undecided.

"There’s a fair amount of latent support for legalization in California," said Anna Greenberg, the firm’s senior vice president. “It is our view, looking at this research, that if indeed legalization goes on ballot in 2012 in California, that it is poised to win."

Californians may not be quite ready to legalize marijuana, but they're eager to tax it. Local ballot measures to tax medical marijuana (or recreational pot, if Prop 19 had passed) passed overwhelmingly in several Bay Area cities, while voters in two coastal cities rejected measures to ban dispensaries.

A step first taken by California in 1996 and by 13 other states since. Oregon voters refused to expand their medical cannabis program to create a network of state-licensed non-profit dispensaries

According to the Newsletter of the embassy of Israel in Germany a committee of the health ministry for the medical use of cannabis  has recommended on 3 November to include the drug in the official list of medicinal drugs. Already within half a year cannabis should be available in Israelian pharmacies.

Following the recommendation of the committee's chair, Dr. Yehuda Baruch, it is intended to form an interministerial committee to clarify open questions. Baruch said that cannabis is helpful in pain therapy, in illnesses such as multiple sclerosis and helps against nausea for example in cancer chemotherapy.

In September 2010 the health ministry authorized five more doctors to prescribe cannabis, which so far was restricted to one doctor (Dr. Baruch). The ministry estimates that in 2010 there will be an increase of 66 percent in the permits for cannabis, allowing treatment for about 5000 patients. In the future, the ministry expects tens of thousands of patients to be treated with cannabis.

According to research with rhesus macaques at the Louisiana State University Health Sciences Center in New Orleans, USA, the administration of THC may decrease disease progression in a HIV-model.

The monkeys were infected with the SI-virus, which is the equivalence to the HI-virus in humans. THC administration was started 30 days before infection. THC administration decreased early mortality from SIV infection, and this was associated with decreased viral load and retention of body mass. Authors speculate "that reduced levels of SIV, retention of body mass, and attenuation of inflammation are likely mechanisms for THC-mediated modulation of disease progression that warrant further study."