USA: New Mexico wants to establish a system for the distribution and manufacture of medical cannabis

USA: New Mexico wants to establish a system for the distribution and manufacture of medical cannabis

Ireland: Most recent price estimates from the Garda National Drug Unit (GNDU) put the price of cannabis resin - by far the most widely used illegal drug in Ireland - at €7 per gram for users here.  A gram of herbal cannabis, the product of choice for Ireland's growing network of Irish-based west African gangs, costs users half the price of resin. The Irish cannabis resin market has a retail worth of over €370 million (by far the highest of all drug types). The GNDU estimates that the wholesale price of a kilo of cannabis resin is around €3,200.  The potential profit from one kilo is massive: if sold at a rate per gram, the profit made from one kilo is over €11,700. The valuation of illegal drugs in the Irish market is closely aligned to comparable markets nearby, mostly in Northern Ireland, Scotland and Britain.  There is close cooperation between Irish and British drugs gangs, as both groups use the same supply chains to traffic heroin from Afghanistan, cannabis resin from Morocco via Spain, herbal cannabis from South America, and ecstasy from Holland.  But numerous analyses of prices paid by drug users here and in Britain show that Irish drug consumers are willing to pay over the odds for their illicit fix compared to their neighbours. 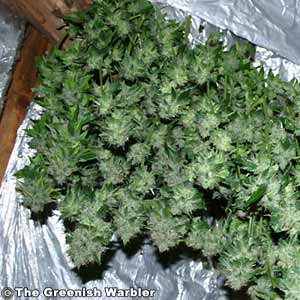 In Ireland, the profit made from one kilo is estimated at over €11,700

UK: The number of people given warnings by police after being caught carrying cannabis in London rocketed by nearly 50 per cent in the past year. Figures show about 30,000 were given official warnings, compared with just over 21,000 issued in 2005/06. The Met said today the warnings are "useful and effective" and their rising number reflects efforts to tackle crimes such as street robbery and burglary. A spokesman said: "They are a bi-product of tackling and disrupting priority crime as well as dealing with issues raised by communities who see cannabis use fuelling anti-social behaviour and other low-level crime. "Cannabis warnings are also time efficient in dealing with this crime and allow officers to remain on patrol and visible to the public." The warnings system was introduced when the Government downgraded cannabis from a Class B to a Class C drug three years ago. The number of warnings issued in London now makes up more than a third of those handed out across the UK. But police insiders admit some borough commanders are using the sanction to boost crime detection rates.

USA: Courts in California and Colorado ordered the police to return seized cannabis from patients who were allowed to use the drug under state laws. The police argued that the possession of cannabis was illegal under federal law. The judges argued that
enforcement of federal drug laws did not supersede the state's allowance of cannabis for medicinal purposes.

USA: New Mexico wants to establish a system for the distribution and manufacture of medical cannabis. Patients, caregivers or private entities could get licenses from the state Department of Health to provide cannabis under New Mexico's medical cannabis program, according to proposed regulations released by the department. The proposed rules would establish a regulated system for the licensure, distribution and manufacture of medical cannabis. The department plans to publish the rules later this month. A public hearing will be held in Santa Fe on 14 January. The state law that took effect this summer allows the use of cannabis for pain or other symptoms of debilitating illnesses such as cancer, glaucoma, epilepsy, multiple sclerosis, HIV-AIDS and spinal cord injury. Since the law took effect on 1 July, the department has certified 74 patients as eligible to possess cannabis. That protects the individuals from state prosecution, but leaves them to find their own supply of cannabis potentially growing it themselves or obtaining it from friends or drug dealers. Under the proposed rules, the department would provide for several different kinds of licensed producers, including a qualified patient, a caregiver, a state-owned or operated facility or a private entity. New Mexico was the 12th state to legalize cannabis for certain medical uses, but it is the only one where the law calls for state-licensed production and distribution of the drug.

USA: On 20 November 2007 it was 25 years that Irvin Rosenfeld, who is suffering from a rare bone disease, was allowed by the federal government to use cannabis. He is the longest living of the federal government's medical cannabis recipients. Once there
were 13 in the exclusive club. There are only five left. No new participants have been allowed since 1992, but those in the program still are supplied cannabis grown at the University of Mississippi and rolled into cigarettes in North Carolina. Rosenfeld was the second person in the USA to get a federal license to smoke cannabis. The first, Robert Randall, a glaucoma and later an AIDS patient, died in 2001

Science: British researcher demonstrated in animal models of multiple sclerosis that cannabinoids were neuroprotective and immunosuppressive, which could slow disease progression. However, only the neuroprotective effects were achieved at doses low enough to be relevant in treatment of humans. Immunosuppressive effects were only achieved at high doses. (Source: Croxford JL, et al. J Neuroimmunol. 2007 Nov 23
[Electronic publication ahead of print])