In a Seattle Times op-ed Saturday, former US Attorney for the Western District of Washington John McKay defected to the other side. As the federal prosecutor in Seattle, McKay oversaw the indictment and prosecution of Canadian marijuana seed seller and pot advocate Marc Emery, who now sits in an American federal detention facility awaiting the formal handing down of a five-year prison sentence later this month. But while he thinks Emery and most pot-smokers are "idiots," McKay has come to see the futility of continuing to enforce marijuana prohibition. 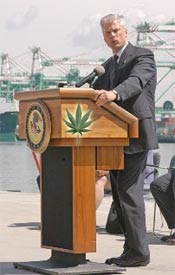 "As Emery's prosecutor and a former federal law-enforcement official, however, I'm not afraid to say out loud what most of my former colleagues know is true: Our marijuana policy is dangerous and wrong and should be changed through the legislative process to better protect the public safety," he wrote. Marijuana prohibition "has utterly failed," McKay concluded. "The demand for marijuana in this country has for decades outpaced the ability of law enforcement to eliminate it," he declared, ready to throw in the towel. "Brave agents and cops continue to risk their lives in a futile attempt to enforce misguided laws that do not match the realities of our society," he wrote.

"These same agents and cops, along with prosecutors, judges and jailers, know we can't win by arresting all those involved in the massive importation, growth or distribution of marijuana, nor by locking up all the pot smokers." Pot prohibition fills the pockets of "Mexican and other international drug cartels and gangs," even though marijuana is nowhere nearly as harmful to users as other illegal drugs, McKay wrote. "So the policy is wrong, the law has failed, the public is endangered, no one in law enforcement is talking about it and precious few policymakers will honestly face the soft-on-crime sound bite in their next elections. What should be done?" McKay asks.

California's Proposition 19, the tax and regulate cannabis marijuana legalization initiative, continues to lead in the latest SurveyUSA poll of likely voters, but with a smaller lead than two previous SurveyUSA polls. The latest poll has the support for the initiative at 47%, with 43% opposed and 10% undecided. July and August polls from SurveyUSA had support for Prop 19 at 50%, opposition at 40%, and 10% undecided.

The poll numbers suggest that the opposition is managing to peel away some people who had previously indicated they would support the measure. The initiative, sponsored by Oakland medical marijuana entrepreneur Richard Lee, would legalize the possession of up to an ounce of marijuana by people 21 or over. It would also allow adults to grow up to 25 square feet of pot and possess the resulting harvest. It would give cities and counties the local option of taxing and regulating marijuana sales.

USA: More Than Half a Million Californians Arrested for Marijuana Possession in Past Decade

According to figures from the California Criminal Justice Statistics Center, more than 550,000 people were arrested for misdemeanor marijuana possession in the Golden State between 1999 and 2009. Last year, 61,164 people were arrested for pot possession, down slightly from 2008's record 61,388. The number of small-time marijuana arrests hovered at around 50,000 a year for most of the decade.

But in 2007, it jumped to just under 60,000, and crossed that threshold in 2008. Under California law, possession of up to an ounce is a misdemeanor punishable only by a maximum $100 fine for a first offense. But because it is a misdemeanor -- not a civil infraction -- each arrest requires booking and a court appearance, leading to costs for the criminal justice system, as well as costs and a criminal record for the arrestee.

A bill, SB 1449, approved by the state legislature earlier this week would change the misdemeanor to a civil infraction. It awaits action on Gov. Schwarzenegger's desk. The Proposition 19 marijuana legalization initiative would allow people 21 or over to possess up to an ounce without fear of arrest. An additional 135,000 people have been arrested on felony marijuana cultivation or distribution charges in the past decade.

For all drug felonies, that figure rises to 1.4 million over the past decade. An additional 850,000 arrests were made for non-marijuana drug misdemeanors. While last year's 78,514 marijuana arrests (felonies and misdemeanors) is an all-time high, arrests for other drug offenses are declining. Narcotics (heroin and cocaine) felony arrests peaked at more than 56,000 in 2007, but declined to just under 44,000 last year, while dangerous drug felony arrests have declined by half since peaking at nearly 93,000 in 2005.

Governor Haley Barbour on Friday signed a bill immediately banning the sale and possession of the herbal mixture known by names such as Spice, K2, Demon, Voodoo, Genie and Zohai. Retailers can't sell the products, but they have until Oct. 1 to return them to distributors or turn them over to law officers.