USA: Legalisation of marijuana would save approximately $10 to $14 billion annually

USA: Legalisation of marijuana would save approximately $10 to $14 billion annually

USA: College economics professor Carl Moody has endorsed a report advocating the legalization of marijuana, which, according to research done by a Harvard University professor, would create savings and tax revenues resulting in a net gain of approximately $10 to $14 billion annually. Harvard economics professor Jeffrey Miron's report, published in June 2005, is called "The Budgetary Implications of Marijuana Prohibition," and has garnered the support of over 530 economists from colleges and universities across the nation. Focusing on federal budgets, Miron's report notes that "prohibition entails direct enforcement costs and prevents taxation of marijuana production and sale." Moody decided to express his support for the matter because he has long agreed with Miron's argument, despite the controversy surrounding the issue. "It just makes so much sense. I've done lots of research, never published it, but I looked into it, and the cost of drug prohibition is just enormous," Moody said in a phone interview. "It is controversial, but look who else supports it. I'm with Nobel Laureate winners. If [Nobel Laureate recipients Dr.] Milton Friedman and [Dr.] Vernon Smith can take the heat, so can I. It's just so sensible, why wouldn't people agree?" According to the report, lifting prohibition and allowing for the taxation of marijuana would save the government approximately $7.7 billion per year in enforcement costs. Of these savings, $5.3 billion would be accumulated at the state and local levels from such expenditures and $2.4 billion at the federal level. 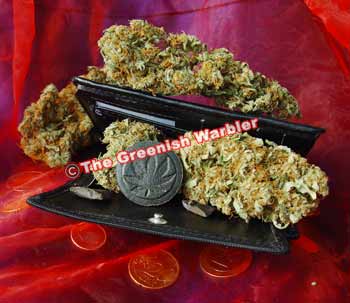 "USA: Legalisation of marijuana would
save the country far more than some bucks..."

Canada: Member of Parliament Dr. Keith Martin reintroduces Private Members Bill to decriminalize the simple possession of marijuana. Dr. Keith Martin reintroduced his Private Members Bill in the House of Commons which would amend the Controlled Substance Act to decriminalize a set amount of marijuana being carried on a person or located in someone's residence. A recent media investigation showed that Health Canada charges terminally/chronically ill patients up to 1500 per cent above market

price for medicinal marijuana grown at their facility in Flin Flon. This is an outrageous abuse of the sick. "The Government is on one hand wasting police and court resources to pursue small-time offenders, while on the other, criminally overcharging cancer and chronically ill patients for medicinal marijuana. This Private Members Bill will establish guidelines and limits for possession on the individual. It will enable resources to be redirected to prevention (especially for children), treatment and
rehabilitation services. I hope this bill will push the government to establish a national strategy to address illegal drug use," said Dr. Martin.

UK: Police call for “dope tickets”. Current government rules on cannabis are inadequate to deal with Camden Town's drugs blight, according to the borough's senior policeman who is calling for new powers. Police should have the power to issue "tickets" and UKP80 fines to anyone caught with cannabis if the High Street's reputation for dope-pushing is to be stubbed out, Chief Superintendent Mark Heath told the New Journal.  Under his proposals, existing Home Office guidelines, which advise police to issue warnings rather than prosecute, would be replaced with a system of on-the-spot fines that carried a criminal record. This will fuel the debate over the current government's robustness in dealing with the class C drug. He said: "We do some formal warnings but it doesn't really cut the ice much if you say 'excuse me sir, you're not allowed to have a bit of cannabis in Camden Town, dreadfully sorry'. If it had a fixed penalty notice attached to it for UKP80 it would be quite useful." The Camden Town experience of street pushers operating among stalls and shops selling cannabis paraphernalia has no close parallel in London and calls for special powers, he added, with only Brixton drug market coming close. Fixed Penalty Notices would be used against first-time offenders.  The proposals have formed part of the action-plan for tackling anti-social behaviour in Camden put forward by Lib Dem crime tsar Councillor Ben Rawlings, despite his party's support for the Home Office decision not to upgrade the classification of cannabis. The Home Office said last week that there were no plans to change policy on cannabis possession.

Scotland: HALF of the Scottish National party's shadow cabinet, who could be running the country within a week, have admitted smoking cannabis before they entered politics. Among those who said they had tried the drug are Nicola Sturgeon, the party' s deputy leader, Shona Robison, who could become Scotland's next health minister, and Fiona Hyslop, potentially the next schools minister. Others include Tricia Marwick, the SNP's housing spokeswoman, Stewart Maxwell, its culture spokesman, and Bruce Crawford, its business manager and campaign chief. Crawford said he smoked a joint to relieve the disappointment of watching Scotland  lose a football match against Spain. Fergus Ewing, the party's transport spokesman, said he had been suspended for two weeks after being caught smoking the drug as a 16-year-old pupil at Loretto, Scotland's oldest independent boarding school, near Edinburgh. Sturgeon and the other six frontbenchers said they did not believe that experimenting with a soft drug in their youth should count against serving politicians. Alex Salmond, the SNP leader, John Swinney, the shadow finance minister, Kenny MacAskill, the shadow justice minister, and Richard Lochhead, the shadow environment minister, said they had never tried cannabis, but did not think youthful experimentation should overshadow a politician's career.

World: The Commission on Narcotic Drugs of the United Nations decided against reclassification of dronabinol (THC) due to political reasons. On its 50th meeting held in Vienna from 12-16 March 2007 the Commission on Narcotic Drugs (CND) of the UN decided against a rescheduling of dronabinol (THC), the main active principle of cannabis, from Schedule II to Schedule III of the 1971 Convention on Psychotropic Substances, as it was proposed by the Expert Committee of the World Health
Organisation (WHO) at its meeting in 2006. The WHO stated that the substance has a moderate therapeutic usefulness and as a result of continuing clinical research, its
medical use is likely to increase. It found that Schedule III is more appropriate and that its present listing in Schedule II is outdated. The WHO estimated the abuse risk for dronabinol to be very low. However, in the notification process of the CND meeting several countries and in particular the US were strongly opposed to rescheduling. In addition, the International Narcotics Control Board (INCB) of the UN spoke out against the WHO recommendation in its 2006 Annual Report and at the CND plenary. According to the Board, there have been reports of its abuse in a country in which it is prescribed most, meaning the US. However, the US in its extensive written comments to the WHO on dronabinol had mentioned only "low levels of diversion and abuse". In the oral statements only two out of 15 speakers expressed themselves in favour of the proposed rescheduling. Several speakers questioned the scientific basis of the recommendation. The lack of support was a remarkable difference with the written replies the WHO had received in past months, where 11 out of 13 countries had made clear they had no objections to the
proposed rescheduling. Canada was at least honest in its rejection, commending the WHO for its "excellent expert advice", the validity of which they did not question, but making clear that for other considerations the government could not support rescheduling because it "may send a confusing message with regard to the risks associated to cannabis use".

Science: THC reduces cancer growth and spreading to other organs in lung cancer. According to a press release by the American Association for Cancer Research (AACR) an animal study by researchers at Harvard University was presented at the 2007 annual meeting of the organisation on 14-18 April in Los Angeles, which shows that THC may be useful in lung cancer. THC was shown to reduce tumour growth in common lung cancer by about 50 per cent and significantly reduce the ability of the cancer to spread in mice treated for three weeks with the substance. "The beauty of this study is that we are showing that a substance of abuse, if used prudently, may offer a new road to therapy against lung cancer," said researcher Dr. Anju Preet.