The Californian city of Oakland on 20 July legalized large-scale cannabis cultivation for medical use and will issue up to four permits for "industrial" cultivation starting next year. The move by the San Francisco Bay Area city aims to bring medical cannabis cultivation into the open and allow the city to profit by taxing those who grow it. 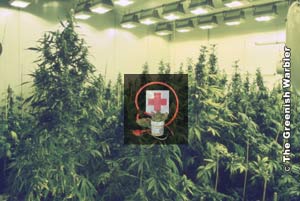 The resolution passed the city council easily after a nearly four-hour debate of supporters of small-scale "garden" growers against advocates of a bigger, industrial system that would become a "Silicon Valley" of cannabis. "This is going to grow as an industry. And someone is going to have a high-tech producer," Council Member Jean Quan said during the debate. Oakland already taxes sales of medical cannabis, but cultivation has existed in a legal grey area.

On 26 July Oakland's city council approved a 5 percent gross receipts tax on licensed cannabis growers and on businesses selling cannabis for medical purposes, and anticipating legalization of cannabis in California a 10 percent rate on sales of cannabis used for recreational purposes.

USA: The Department of Veterans Affairs will formally allow patients to use cannabis in states where it is legal

The federal Department of Veterans Affairs will formally allow patients treated at its hospitals and clinics to use cannabis for medicinal purposes in states where it is legal. A department directive resolves the conflict in veterans facilities between federal law, which outlaws cannabis, and the 14 states that allow medicinal use of the drug. The policy will not permit department doctors to prescribe cannabis.

But it will address the concern of many patients who use it that they could lose access to their prescription pain medication if caught. Such fear has led many patients to distrust their doctors, veterans say. With doctors and patients pressing the veterans department for formal guidance, agency officials began drafting a policy last fall.

"When states start legalizing marijuana we are put in a bit of a unique position because as a federal agency, we are beholden to federal law," said Dr. Robert Jesse of the Veterans Department. At the same time, Dr. Jesse said, "We didn't want patients who were legally using marijuana to be  administratively denied access to pain management programs."

USA: Washington D.C.
Medical cannabis is now legal in the District of Columbia after the Democrat-controlled Congress declined to overrule a D.C. Council bill that allows the city to set up as many as eight dispensaries where chronically ill patients can purchase the drug.

The council approved the bill in May, and according to the law Congress has 30 legislative days to review laws of the council of Washington D.C.

A majority of California voters support Proposition 19, the state's Tax and Regulate Cannabis marijuana legalization initiative, according to a poll released Tuesday by Public Policy Polling. The poll has support at 52%, with 36% opposed and 12% undecided.

The ballot measure would legalize the possession of up to an ounce of marijuana by those 21 or older, as well as allowing any adult to grow up to 25 square feet of it. It would also give counties and municipalities the local option to approve the regulated cultivation, sale, and taxation of marijuana.

The poll was an automated phone sampling of 641 people who voted in the last election. As Nate Silver of the polling analysis web site 538.com has noted, this is the sixth California legalization poll released in recent months. Automated call polls like this one have consistently shown Prop 19 winning, while human operator polls have shown in losing narrowly. Silver suggests that people are less likely to take a possibly controversial position (such as legalizing marijuana) with a human operator, thus introducing a possible downward bias in the human operator polls.

Personal drug use should be legalised, the leader of the country's barristers has suggested. Nicholas Green QC, the chairman of the Bar Council for England and Wales, said it was "rational" to consider "decriminalising personal drug use". Taking such a step would save the economy billions of pounds - drug-related crime costs the economy £13billion a year - free up police time, cut crime and improve public health.

However campaigners and MPs rounded on the remarks, made in a newsletter to barristers, saying it sent out the wrong message on drug use. Mr Green, who runs body which the 4,500 criminal and defence barristers, said: "A growing body of comparative evidence suggests that decriminalising personal use can have positive consequences. "It can free up huge amounts of police resources, reduce crime and recidivism and improve public health.

All this can be achieved without any overall increase in drug usage. If this is so, then it would be rational to follow suit." Mr Green, who has made his name primarily as an expert in competition law and arbitration issues, said the Council was apolitical and could speak out in favour policies "which work and not those which simply play to the gallery. "And this will save money and mean that there is less pressure on the justice system." In the paper which looked at how money coul d be saved in the criminal justice system, Mr Green also spoke out in favour of Ken Clarke, the Justice secretary, who has signalled that fewer criminals should be sent to prison.

He said: "If the prison population could be reduced from circa 85,000 to 80,000 it could save over £200million per annum. "There is a great deal of research from elsewhere to suggest that a less "bang 'em up" approach to sentencing actually reduces crime. "The tabloids' response, which is to throw more people into custody, simply does not work."

Spain: Sativex receives approval in Spain and other European countries are likely to follow

The cannabis extract Sativex of the British company GW Pharmaceuticals has been approved in its second European, Spain, as an add-on therapy for treating spasticity in patients with multiple sclerosis (MS).
The news follow a green light in June 2011 in Britain. GW said on 28 July it had also filed to get the medicine approved under the Europe Union's mutual recognition procedure in other selected markets, including France, Germany and Italy. Clinical trials have shown Sativex, which is sprayed under the tongue, reduces spasticity in MS in patients who do not respond adequately to existing therapies.

It became the world's first cannabis medicine to win regulatory clearance when it was approved in Canada in 2005 for neuropathic pain in MS.