The head of the Hemp and Cannabis Foundation in Portland, Paul Stanford, is working to put a measure on the 2012 ballot in Oregon to legalize marijuana. Stanford told KATU marijuana should be regulated like cigarettes and liquor. 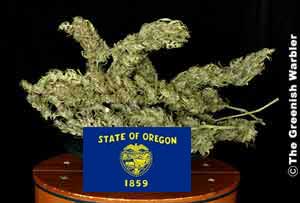 He says taxes would bring a steady flow of revenue to the state. Stanford needs nearly 90,000 signatures to make the ballot. Last November, Oregon voters turned down a measure that would have allowed dispensaries to sell limited amounts of marijuana to Oregonians with medical marijuana cards.

Hoping the second time is the charm, Rhode Island state Rep. John Edwards (D-Portsmouth) has reintroduced a bill that would decriminalize pot possession there. He sponsored the same bill last year, but it failed to make it through the legislative process. The bill, H 5031, would make possession of less than an ounce of marijuana a civil infraction with a maximum fine of $150.

Under current Rhode Island law, possession of any amount of pot is misdemeanor with a maximum penalty of one year in jail and a $500 fine. "My intent with this legislation remains the same, to provide some relief to the taxpayers of our state," Edwards said in a Tuesday press release. "In these difficult times, we must look for ways to cut costs wherever we can. Rhode Islanders should not be footing the bill to keep people in jail due to simple possession charges. It’s a huge waste of taxpayer dollars." Rhode Island would save between $1 million and $4 million a year in law enforcement, court, and corrections costs if the bill passed, Edwards said.

The state spends an average of $44,000 to house one prisoner for one year, the press release noted. Making the penalty a civil rather than a criminal offense will also spare people, especially young people, from having a criminal record that could limit their job opportunities, Edwards said. "A youthful indiscretion should not be something that ruins a person’s chance to become a teacher, fireman or even volunteer in a child’s classroom," he said

A dozen years after voters approved Washington's medical marijuana system, state lawmakers are debating major changes that would give patients greater protection from arrest and bring the supply chain out of a legal gray area. Patients and advocates packed Thursday's meeting of the Senate Health and Long-Term Care Committee, which was discussing a bill proposed by Sen. Jeanne Kohl-Welles, D-Seattle.

With a nod to federal policies that are now more tolerant of state medical marijuana laws, Kohl-Welles' bill would make sweeping changes while attempting to keep the supply chain from resembling the more wide-open markets seen in California. "We don't want the big billboards. We don't want the neon lights in dispensaries," Kohl-Welles said. A major element of her bill would give patients protection from criminal arrest. Current law offers less protection, giving authorized medical marijuana patients the ability to offer a defense in court if they're charged with possession.

Patients and doctors could enter information into a voluntary, secure database that law enforcement could access to check someone's authorization.  The bill also would address a conundrum in Washington's system: It's technically legal for a patient to possess pot, but the proper ways of getting the drug can be unclear. Current state law does not allow for marijuana sales, instead saying that patients must grow marijuana themselves or designate a caregiver to grow it for them. But growing marijuana can be expensive and difficult, particularly for very ill people.

Press release from ASA: “The National Call to Action is the nation's first medical cannabis virtual skill-building conference. Re-pledge your commitment to safe and legal access by joining thousands of your fellow activists for two days of community-building, skill-sharing, and strategic planning.

For nearly a decade ASA has been hosting trainings and workshops to build capacity among our base and mobilize our activists. When we began this work, ASA focused on the battles in California. Today our scope is national, and we get pleas from almost every state asking us to help them activate their base and build a strategy to ensure safe access. ASA's success over the years has been a combination of strategic efforts from a knowledgeable staff, and an ability to empower and mobilize a grassroots base for medical cannabis issues. We have always known the path to victory will be a patient-led movement, and through years of outreach, education and training, ASA has laid the foundation for that path.”

Rep. Tom Trail, R-Moscow, sponsored the Idaho Compassionate Use Medical Marijuana Act to establish a system for patients to legally obtain and use medical marijuana. "This legislation provides another option for medically challenged citizens and provides protections for our citizens as a whole," Trail said. "

It gets down to a states rights issue: Should the use of medical marijuana be determined by the doctor-patient relationship, or by Congress and law enforcement?" The bill has been assigned to the House Judiciary, Rules and Administration Committee.