USA: “Grow Houses” on the advance

USA: “Grow Houses” on the advance

USA: Police say 'grow houses' have proliferated because they offer privacy
and move growers closer to their markets. Raids on 40 houses in 12 suburban Georgia counties over the past two weeks are one recent sign of what police say is a national trend in marijuana marketing: growing the illicit crop year-round indoors,
using suburban homes as "grow-houses." Grow-houses - a spacious incarnation of the old grow-room – have proliferated like suburban-garden gnomes, as antidrug squads have chased growers off remote mountainsides and out of cornfields. In
these basements, lights hum with thousands of watts across a sea of plants lodged in a hydroponic soup of nutrients. Upstairs, there's usually no furniture, police say, except a cot, a chair, and a rabbit-ear TV. "It's the most impressive thing I've seen in 20 years of law enforcement," says Lt. Jody Thomas of the Fayette County Drug Taskforce. 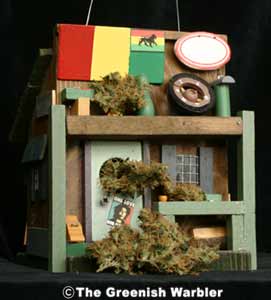 USA: "Grow Houses" on the advance

On Jan. 24, 2002, at Juneau-Douglas High School (Alaska) Joe Frederick and friends unfurled a 14-foot paper banner with duct-tape letters reading "Bong Hits 4 Jesus". They were standing on a sidewalk opposite the high school during a public Olympic-torch parade attended by students and teachers. The phrase, which they'd spotted on a snowboard sticker at a local ski slope, was meant to be funny, provocative and nonsensically ambiguous, Frederick said. To school officials, it was an open challenge to their anti-drug policies, at what they deemed a school event. Principal Deborah Morse crossed the street and crumpled up the banner. Frederick's move -- and the school's stern response -- had more impacts than he ever imagined. The incident gave way to his suspension from school, several arrests by Juneau police, a lawsuit against the city settled in his favor, the loss of his father's job and, eventually, the departure of father and son from Alaska and the United States. It also resulted in a court case, Morse v. Frederick, that has climbed through the federal system and will be up for oral argument
in the Supreme Court on March 19. Frederick, now 23, still sounded like the defiant student  existentialist Friday in a teleconference from China, where he is teaching high school English. "I wanted to know more precisely the boundaries of my freedom," he said when reporters asked why he'd raised the banner. "I feel that if
you don't use your rights you lose them."

Britain's antiquated laws have failed to control the rapid spread of drug use over the past 30 years and should be replaced with a system that treats users as victims rather than offenders, the Government has been told. A two-year survey of drug use reached the damning conclusion that the current legislation is "not fit for purpose", failing to recognise that alcohol and tobacco can cause more harm than "demonised"
substances such as cannabis and ecstasy. The Royal Society for the encouragement of Arts, Manufactures and Commerce Commission on Illegal Drugs said current laws were "driven by a moral panic" and one of its members warned that increasing numbers of primary school children were experimenting with drugs. The commission, which included academics, community workers and politicians, demanded the abolition of the Misuse of Drugs Act, to be replaced with a broader Misuse of Substances Act. It believes the system of dividing drugs into A, B and C categories
should be swept away in favour of an "index of harms", recognising  the damage that different substances do to users and society as a whole. Under one possible ratings system, heroin, cocaine and barbiturates would be rated the most dangerous drugs. Alcohol (5th) and tobacco (9th) would be treated as more hazardous than cannabis (11th), LSD (14th) and ecstasy (18th). In a proposal that would effectively decriminalise cannabis, it said  jail sentences should be reserved for the most serious drugs offences. It said current classifications for ecstasy and LSD - both class-A substances - lacked credibility.

UK: Cannabis granny to fight on.

A grandmother who "self medicates" with cannabis to ease her depression has vowed to continue to use the drug in defiance of a judge's jail warning. Patricia Tabram, 68, walked free from court despite a jury taking only 15 minutes to convict her of growing and possessing cannabis, but she was ordered to carry out 250 hours community service and pay UKP1,000 costs. It was her second drug conviction after she was given a suspended jail sentence for supplying cannabis in curries, casseroles and cakes which she distributed to other elderly and infirm people near her bungalow, in Humshaugh, Northumberland. Police and the Crown Prosecution Service backed the decision to take her to court and she was warned she will be imprisoned if she continues to flout the law. But Tabram said: "I am still going to medicate with cannabis. This court is not fit for purpose and I am taking up an appeal and putting in a complaint about the fact I was not allowed to have a defence. The law and justice do not exist in this country any more." Flanked by well-wishers, said she would continue the fight and was prepared to go to jail.