USA: Marijuana potency increased last year to the highest level in more than 30 years, posing greater health risks to people who may view the drug as harmless, according to a report released today by the White House. The latest analysis from the University of Mississippi's Potency Monitoring Project tracked the average amount of THC, the psychoactive ingredient in marijuana, in samples seized by law enforcement agencies from 1975 through 2007. It found that the average amount of THC reached 9.6 percent in 2007, compared with 8.75 percent the previous year. The 9.6 percent level represents more than a doubling of marijuana  potency since 1983, when it averaged just under 4 percent. John Walters, director of the White House Office of National Drug Control Policy, cited the risk of psychological, cognitive and respiratory problems, and the potential for marijuana users to become dependent on drugs such as cocaine and heroin. The White House office attributed the increases in marijuana potency to sophisticated growing techniques that drug traffickers are using at sites in the United States and Canada. The project analyzed data on 62,797 cannabis samples, 1,302 hashish samples, and 468 hash oil samples obtained primarily from seizures by
law enforcement agencies in 48 states since 1975. But the average potency level of 9.6 percent THC is actually low by world standards. As reported in the new edition of The Science of Marijuana, by Oxford University pharmacologist Dr. Leslie Iversen, the average THC content of seized marijuana products in Britain from 1998 to 2005 ranged from 10.5 percent to 14.2 percent. In the Netherlands, where marijuana is available by prescription through conventional pharmacies, the minimum permissible THC content set in government standards for medical cannabis (except for one special variety developed specifically to be high in cannabinoids other than THC) is 13 percent.

Canada: Soggy weather threatens B.C. pot crop. British Columbia's famed outdoor pot crops - and particularly those on Vancouver Island - will rot if the sun remains a no-show, says marijuana activist and seed-seller Marc Emery. That dire warning came yesterday from Emery, the so-called "Prince of Pot," on yet another cold, drizzly day. "A couple more days of cold and rain and you can get root rot, or powdery mildew or the plants washing away," said Emery of the vast outdoor pot crops now in peril all over B.C. He estimates the outdoor crop in B.C. is worth about $1 billion. Big outdoor crops are harvested in the Kootenay area and the  Okanagan. But the biggest bounty is said to be on Vancouver Island. "If you grow outdoors, you need the sun to dry off the moisture in
the ground and dry off the surface of the plants," he said. He said with the heavy rain, the plants that have been put in the ground in the last few weeks may not survive. "People are starting to lose their crops," he said of the weather-related problems growers are facing with their clandestine crops. Even an end to the heavy rain is little help to the plants now in the ground, said Emery. "Overcast is terrible," he said. "You need sunny, hot and clear conditions and we've had just the opposite." Emery said the record cold and wet conditions "came at the very worst  time, when the plants are so small." Emery notes that about 15 per cent of the total amount of pot grown in B.C. is outdoor. 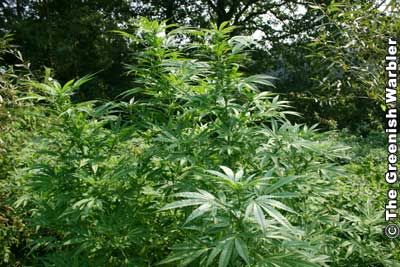 Argentinia: After getting caught with contraband like ecstasy tablets and marijuana, a few young Argentines have been asked by judges recently to pay an unexpected price for breaking the nation's drug laws: None at all. That's because separate federal tribunals here have ruled that a law penalizing the personal use of drugs is unconstitutional. Two offenders have been let off the hook in Buenos Aires. And this week another group of judges echoed the ruling after considering the case of a young man arrested with marijuana. "Criminalization will only apply in cases where the possession of narcotics for personal consumption represents a danger for the public
health of others," the judges announced. The rulings come as Argentina's government is trying to come up with a new way to handle a growing domestic drug-abuse problem. In the past few years, the local press has been chronicling the rise of paco, a smokable form of cocaine. It's cheap, highly addictive and readily accessible, and it has flourished in this city's villa miserias, the shambolic slums that have proliferated after the country's economic collapse in 2001.

USA: New York marijuana activist Dana Beal is free on bail. He paid $7,500 and was released after today's hearing in Coles County Court in Charleston, IL. Beal was being held on $750,000 bail for money laundering. The charge was reduced to obstruction of justice. Beal was traveling through Illinois with two women and another man last week when an “argument” between the women at a restuarant alerted the police. Beal's attempt to intervene and the fact that he was carrying $150,000 in cash resulted in his arrest. He may be charged with money laundering at a later date. A preliminary hearing was set for Aug. 4.