USA: Federal raids of medical cannabis dispensaries will come to an end

On 25 February Attorney General Eric Holder said the administration would uphold the president's campaign promises to end such raids. 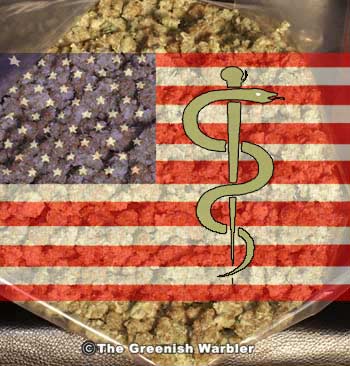 USA: Federal raids of medical cannabis dispensaries will come to an end.

USA/California: Could pot put California in the black?

USA/California  -  Marijuana would be sold and taxed openly in California to adults 21 and older if legislation proposed Monday  is signed into law. Assemblyman Tom Ammiano, D-San Francisco, said his bill could  generate big bucks for a cash-starved state while freeing police to  focus on worse crimes. "I think there's a mentality throughout the state and the country that this isn't the highest priority and that maybe we should start to reassess," he said.

Board of Equalization Chairwoman Betty Yee released a statement Monday supporting Assembly Bill 390 as a way to help law enforcement set priorities while raising new revenues. AB 390 could generate roughly $1.3 billion per year from marijuana sales, according to board estimates. Critics counter that it makes no sense for a Legislature that is so concerned about health that it has restricted use of trans fats in restaurants to legalize the smoking of a potentially harmful drug. Medical use of marijuana is legal in California, but the new  legislation would go a step further by allowing recreational use.

AB 390 would charge cannabis wholesalers $5,000 initially and $2,500 annually for the right to distribute weed. Retail outlets would pay fees of $50 per ounce of cannabis to generate revenue for drug education programs statewide. The bill would prohibit cannabis near schools. It also would ban  smoking it in public places or growing it in public view. Before California could sell marijuana openly, however, it would have  to persuade the federal government to alter its prohibition on pot.

The New Jersey Compassionate Use Medical Marijuana Act (S119) passed the state Senate Monday on a 22-16 vote. Gov. John Corzine (D) said Wednesday he would "absolutely" sign the bill, but it must first get through the Assembly, where it faces votes in the health committee and by the Assembly as a whole. The day was also notable for what happened right after the bill passed.

Senate President Richard Codey (D-Essex), a well-known jokester, pretended to answer a phone on the podium, then yelled out to bill sponsor Sen. Nick Scutari (D-Linden): "Excuse me, Sen. Scutari, I just what you to know that was congratulating you, and it was from Michael Phelps," to groans and embarrassed laughter from the chamber, which, not surprisingly, contained several seriously ill medical marijuana patients but no college-aged bong-hitters. And that could be a sign of changing times, too.

The joke went over like a lead balloon, a local TV station made an evening news feature of Codey's joke and the unamused reactions of medical marijuana patients and supporters, and the Asbury Park Press even editorialized that Codey should apologize for his "tasteless gag." The days of cheap laughs from comparing seriously, even terminally ill patients with Cheech & Chong may be coming to an end.

More young people are using alcohol, Ramadoss warned, citing statistics showing that the age of drinkers at the initiation of alcohol consumption had dropped from 28 to 13 ½ in recent years. He also blamed alcohol for rising death tolls from chronic disease. "The four major risk factors which are directly or indirectly responsible for chronic non-communicable diseases are -- tobacco use, alcohol use, physical inactivity and unhealthy diet," Ramadoss said.

"We need a national alcohol policy," Ramadoss said, urging states to introduce prohibition. The minister added that so far only the states of Jammu & Kashmir and Gujarat had enforced prohibition. Gujarat, the birthplace of Gandhi, whose preaching of abstention continues to carry great weight, enforced alcohol prohibition as soon as Indian gained its independence from Britain in 1947. Prohibitionist sentiment has historically been strongest in India's Northwest, where there are higher levels of alcohol and substance use and strong anti-liquor movements. States in other parts of India, such as the south, have since independence embraced partial prohibitions - either days without drinking or banning of a particular beverage, usually arrack, a concoction made from sugar cane, fruit, or the sap of coconut palms.

Vatican: The Vatican has been accused of putting the lives of thousands at risk by attempting to influence UN drugs policy on the eve of a major international declaration.

The Vatican's objection to "harm reduction" strategies, such as needle exchange schemes, has ignited a fierce debate between the US and the EU over how drugs should be tackled. A new UN declaration of intent is due to be signed in Vienna on 11 March. However, there are major disagreements between member countries over whether a commitment to "harm reduction" should be included in the document, which is published every 10 years.

Now the Vatican has issued a statement that claims that using drugs is "anti-life" and "so-called harm reduction leads to liberalisation of the use of drugs". The Vatican's last-minute intervention appears to have led to Italy withdrawing from the EU consensus on the issue and thrown the talks over the declaration into confusion. In 1998, the declaration of intent was "a drug-free world - we can do it", which critics claimed was unrealistic and did not address the complex nature of drug treatment.

In favour of including support for a harm reduction clause are most EU countries, Brazil and other Latin American countries, Australia and New Zealand. They argue that some commitment to tackling HIV and addiction through needle exchange programmes and methadone and other drugs should be included. Opposed to this are the US, Russia and Japan.

The US position has been that such inclusion sends the wrong message, although there have been indications a more liberal policy might be adopted under Barack Obama. "By making a statement against harm reduction, the Vatican has indicated that its moral objection to drug use is more important than its commitment to the sanctity of life," said Release, the UK-based drugs and legal advice charity. "If the Vatican is allowed to influence the UN to adopt a naive and ineffective drug policy, it will needlessly lead to the increased spread of blood-borne viruses and the death of thousands more people from HIV/Aids."

Science: Nabilone effective in the treatment of nightmares in patients with posttraumatic stress disorder.

According to an article by a psychiatrist of the Health Services of the Canadian army in Ottawa the synthetic cannabinoid nabilone was effective in the treatment of symptoms of posttraumatic stress disorder (PTSD). Nabilone causes similar effects as the natural cannabinoid dronabinol (THC). Charts of 47 patients diagnosed with PTSD and having continuing nightmares in spite of  conventional antidepressants and sedatives were reviewed after adjunctive treatment with nabilone was initiated.

These patients had been referred to a psychiatric specialist clinic between 2004 and 2006. The majority of patients (72 per cent) receiving nabilone experienced either cessation of nightmares or a significant reduction in nightmare intensity. Subjective improvement in sleep time, the quality of sleep, and the reduction of daytime flashbacks and night sweats were also noted by some patients. This is the first clinical report of the use of cannabinoids for the treatment of posttraumatic stress disorder.

Science: The beneficial effects of Sativex in MS patients with spasticity last long-term.

According to a press release by the British company GW Pharmaceuticals their cannabis extract Sativex caused long-term reduction of spasticity in patients with multiple sclerosis. A withdrawal study evaluated 36 patients who had previously been  taking Sativex on prescription for a mean duration of 3.6 years.

The participants were randomized to Sativex or placebo for 4 weeks in a double-blinded manner. During this period, patients were not permitted to change their dose. The primary efficacy endpoint of the study - the time to treatment failure - was statistically significant in favour of Sativex. The difference between Sativex and placebo was also significant for the patient global impression of change and the carer functional-ability global impression of change. This means that the carer recognised that the patient's spasticity became worse when they stopped taking Sativex - thus providing independent verification of the primary endpoint.