USA: Medical marijuana activist and author Ed Rosenthal was found guilty of three federal felonies related to the cultivation and distribution of marijuana May 30. He was found not guilty on one other charge, and a deadlocked jury prompted the prosecution to drop a fifth charge. Rosenthal will serve no jail time. In 2003, Rosenthal was convicted of related charges, but after a jury member learned that the marijuana Rosenthal cultivated was for medicinal purposes - evidence that had been suppressed from court testimony - she recanted her verdict, and a mistrial was declared. Prosecuting attorney George Bevan chose to retry his case against
Rosenthal, which, Rosenthal told the Guardian, was a "purely political" maneuver. The US district judge presiding in the case, Charles Breyer, dismissed nine other charges sought by Bevan, including tax evasion and money laundering, calling them "vindictive." Though Rosenthal has already served his jail time - just one day - he told us that the guilty verdict has larger implications for the medical marijuana movement. He fears the federal government will use this conviction as a green light to take ever more punitive actions against marijuana growers and users, particularly in states like
California that have legalized pot for medical uses. "If [the federal government] can convict in this case, where everything is so black-and-white, they can convict anywhere," Rosenthal said.

USA: Pot busts on the rise. Marijuana cultivation is exploding on the North Coast, fueling an illicit multi-billion-dollar statewide business and frustrating local
lawmakers in a corner of California where about a third of the state's pot is grown. In Mendocino County, a state leader in pot production, the number of plants seized during year-round eradication efforts has nearly doubled in the past five years, from 120,930 to 227,019. Law enforcement officials said the amount being grown could be 10 times greater. Sonoma, Lake and Humboldt counties all have seen sharp increases in marijuana production over the past five years. It is a trend reflected across California, where heavy concentrations of illegal pot also show up in the Central Valley counties of Tulare and Fresno. In the past five years, the number of plants seized during the outdoor marijuana harvest season statewide more than
quadrupled, from 354,202 to 1,675,681. The potential value of the pot ultimately sold on the street is huge. Each mature plant is capable of producing a pound or more of
marijuana, currently worth $2,000 to $4,000, according to law enforcement. The number of plants confiscated year-round in Sonoma County almost quadrupled, increasing from 34,716 in 2002 to 132,967 in 2006. That partly reflects an increase in eradication efforts but still represents an estimated third of what's actually being grown, said Sgt. Chris Bertoli of the Sonoma County Sheriff's Department
Narcotics Task Force. Lake County in 2006 yielded more marijuana - 314,603 plants –´than any other county during the state's Campaign Against Marijuana
Planting, CAMP. Humboldt County's marijuana production also is on the rise. The number of plants eradicated in Humboldt County has increased from 60,847 in 2002 to 104,606 in 2006. This year, authorities already have seized 89,645 plants. 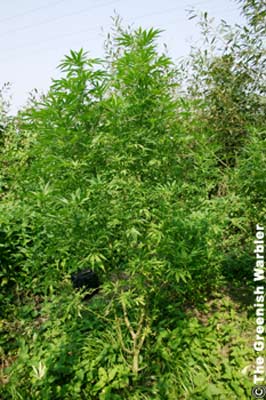 "USA: Many pot  plant seizures were made on national forest land."

The Netherlands: Police action against coffeeshop in Terneuzen. On June 1st, Dutch police acted against coffeeshop Checkpoint in Terneuzen, close to the  border with Belgium. In the shop itself and in a  private house related to the shop, an amount of almost 100 kilos of cannabis was found that was meant to be sold through the coffeeshop.
Science: THC improves appetite and reverses weight loss in AIDS patients. Researchers at the Orlando Immunology Center in Florida  investigated the long-term effects of THC (dronabinol) on 117  patients with HIV/AIDS, who lost weight. Subjects who received dronabinol for 3 to 12 months were included in a retrospective analysis. THC was shown to improve appetite and weight and to reduce nausea. 63 per cent of patients maintained or gained weight. In subjects receiving THC for 1 year, the mean weight gain was about 1700 grams. The percentage of patients experiencing loss of appetite decreased significantly from 71 per cent to 26 per cent at 1 month after start of the therapy and continued to decline throughout the trial. The percentage of patients experiencing nausea (38 per cent) decreased consistently from week 2 on.

Italy: THC and nabilone may be prescribed. With a decree by Health Minister Livia Turco, which was published on 28 April 2007, THC (dronabinol) and the THC
derivative nabilone were allowed for medical use. The decree does not need the adoption by the parliament, which make the two substances legal for medical use at once.

USA: A measure legalizing the medicinal use of cannabis was approved in the state Senate on 1 June by a 23-13 vote. The House of Representatives already approved the measure on 23 May. It is unclear whether Governor M. Jodi Rell, who has said she has mixed feelings about the measure, will sign the bill. If the bill would be signed Connecticut would become the 13th state of the USA to allow the medical use of cannabis.

USA: Vermont - The medical cannabis law of Vermont was expanded. So far, people with life-threatening conditions were allowed to use the drug without fear of prosecution. Now it covers also people with  chronic, debilitating conditions.