USA: The US Drug Enforcement Administration (DEA) announced Wednesday that it is issuing an emergency ban on five chemicals used to make synthetic marijuana products. The ban will go into effect in 30 days and will at least temporarily place the chemicals on Schedule I of the Controlled Substances Act. Marketed as incense and sold under names including Spice and K2, the stuff has grown increasingly popular since it first appeared on store shelves around two years ago. 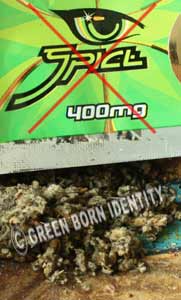 Spurred on by prohibitionist reflex, as well as reports of emergency room visits and calls to poison centers, 15 states have already banned synthetic pot products. Similar legislation is pending in several more. Last week, powerful Sen. Orrin Hatch (R-UT) wrote a letter to the DEA seeking a federal ban. The ban announced Wednesday is temporary and will be in effect for one year, with the possibility of a six-month extension. During that period, DEA and the Department of Health and Human Services will decide whether the substances should be permanently controlled.

USA: The American Medical Association (AMA) has voted to reverse its long-held position that marijuana be retained as a Schedule I substance with no medical value.

The AMA adopted a report drafted by the AMA Council on Science and Public Health (CSAPH) entitled, "Use of Cannabis for Medicinal Purposes," which affirmed the therapeutic benefits of marijuana and called for further research. The CSAPH report concluded that, "short term controlled trials indicate that smoked cannabis reduces neuropathic pain, improves appetite and caloric intake especially in patients with reduced muscle mass, and may relieve spasticity and pain in patients with multiple sclerosis."

Furthermore, the report urges that "the Schedule I status of marijuana be reviewed with the goal of facilitating clinical research and development of cannabinoid-based medicines, and alternate delivery methods." The change of position by the largest physician-based group in the country was precipitated in part by a resolution adopted in June of 2008 by the Medical Student Section (MSS) of the AMA in support of the reclassification of marijuana's status as a Schedule I substance.

In the past year, the AMA has considered three resolutions dealing with medical marijuana, which also helped to influence the report and its recommendations. "It's been 72 years since the AMA has officially recognized that marijuana has both already-demonstrated and future-promising medical utility," said Sunil Aggarwal, Ph.D., the medical student who spearheaded both the passage of the June 2008 resolution by the MSS and one of the CSAPH report's designated expert reviewers.

The Canadian Senate Friday passed the Conservative government's crime bill, S-10, which institutes mandatory minimum sentences for a number of non-violent drug offenses, including a six-month sentence for growing five pot plants. The bill now heads to the House of Commons for hearings and a vote.

Last year, the bill passed the House, but had been watered down by a Senate amendment raising the bar for mandatory minimums to more than 200 plants. But the bill died before final passage when Prime Minister Steven Harper dissolved parliament. This year, after elections strengthened the Conservatives' hand in the Senate, the body of sober second thoughts had no stomach for another fight over the bill, which was reintroduced this spring by Justice Minister Rob Nicholson.

Liberal members of parliament counted heads and conceded they couldn't pass the amendment again. Another amendment that would have had the mandatory minimums kick in at 20 plants was defeated earlier. The bill would impose six-month mandatory minimums for growing five or more plants with the intent to sell and one-year minimums when marijuana dealing is linked to organized crime or a weapon is used. The bill would also impose mandatory minimum one-year sentences for dealing hard drugs when linked to organized crime or weapons and two-year sentences for dealing hard drugs to minors or near a school or other place where young people congregate.

USA: Federal and State Police Conduct Marijuana Terrorism Drill
Northern California pot growers bomb a car and a bus, then take over Shasta Dam in a bid to free an imprisoned comrade. It sounds like the plot to a very cheesy Grade-B thriller, but it was actually the premise for a day-long terrorist attack drill conducted by 20 state, local, and federal law enforcement agencies Wednesday.

According to an account published in the local paper the Redding Record Searchlight, the Shasta Dam scenario had the "Red Cell" pot grower/terrorists blowing up the car and bus to create a distraction and then taking over the dam. Holding three people hostage, the terrorist pot growers then threaten to flood the Sacramento River by opening the flood gates unless their imprisoned comrade is freed.

The drill was part of the US Bureau of Reclamation's Critical Infrastructure Crisis Response Exercise Program, which started in 2003. It identified six dams, including Shasta, the nation's second largest, as possible terrorist targets. Similar exercises took place at Utah's Flaming Gorge Dam in 2003, Washington's Grand Coulee Dam in 2005, and Hoover Dam on the Arizona-Nevada border in 2008. But none of those exercises identified pot growers as the putative terrorists. According to bureau spokesperson Sheri Harral, the drill took 18 months of planning and cost the bureau $500,000. The other emergency and law enforcement agencies that participated paid their own expenses.

The Senate in the Commonwealth of the Northern Marianas Islands has rejected a bill that would have legalized marijuana for both medicinal and recreational use. The bill had passed the House two weeks ago. The bill would have allowed people 21 and over to possess, cultivate, and transport marijuana for personal use.

The passage of the bill by the House marked the first time a pot legalization bill had passed in a legislative chamber in any US territory. The bill, HB 17-45, was championed by Rep. Stanley Torres (I-Saipan). Earlier this year, a cost-benefit analysis performed by the House Committee on Natural Resources said enacting the bill into law "will possibly result in the loss of federal funds but at the same time the Commonwealth government will generate funds through taxation."

Torres and other legalization supporters also argued that the bill would allow access to marijuana by the ill and reduce crime and violence in black markets. But Senate President Paul Manglona (R-Rota) said after the House vote that the Senate would kill the bill. "It's for the same reasons I mentioned before," he told the Saipan Tribune, citing concerns about marijuana use's impact on CNMI youth and other ill effects on the community.