It's already being dubbed "the Amsterdam of the Rockies" and an après-ski spliff is likely to become almost as common as a beer whencannabis possession is legalised in the hip mountain town of Breckenridge, Colorado, on 1 January. Well known as a laid-back party resort characterised by baggy-trousered snowboarders and a vigorous happy hour, Breckenridge oted last month to relax marijuana laws. 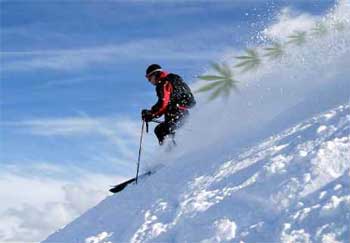 From New Year's Day there will be no criminal or civil penalties imposed on anyone carrying up to an ounce of marijuana  or the paraphernalia usually associated with it, such as long rolling papers, a small pipe or a bong. That also goes for tourists, in a resort popular with British visitors who flock there for the exciting ski slopes and the exuberant nightlife.

As for medical marijuana, patients who are allowed to use cannabis in Colorado have a constitutional right to buy cannabis, not just use it, according to a ruling on 30 December. Judge Christopher Cross of the Arapahoe County District Court supported the CannaMart dispensary, which sued the city of Centennial after it was shut down in October. Cross granted the dispensary's request for an injunction, which will prevent the city from keeping the dispensary closed while CannaMart challenges the city's argument that it can ban cannabis shops because they violated federal drug laws.

There are about 30,000 patients state-wide in Colorado, who are allowed to use cannabis for medicinal purposes. As of mid-August, three  quarters of these recommendations came from 15 doctors.

There are 899 patients with an approval of the medical use of cannabis, of whom more than half remain without adequate access to their medicine.

For reasons unknown, Cannabis Culture Magazine's Facebook page has been disabled by the popular social networking site. The Cannabis Culture Facebook page, which had over 25,000 fans, (and was available at this link http://www.facebook.com/pages/Cannabis-Culture-the-Magazine-of-Marijuana-and-Hemp/6727057901) disappeared on December 23, 2009.

Shortly afterward, administrators of the page received an email notification: Hello, You created a Page that has violated our Terms of Use. A Facebook Page is a distinct presence used solely for business or promotional purposes. Among other things, Pages that are hateful, threatening, or obscene are not allowed.

We also take down Pages that attack an individual or group, or that are set up by an unauthorized individual. If your Page was removed for any of the above reasons, it will not be reinstated. Continued misuse of Facebook's features could result in the permanent loss of your account.

The 8th US Circuit Court of Appeals in St. Louis last Tuesday upheld a lower court's decision to dismiss a lawsuit by a pair of North Dakota hemp farmers who argued they should be able to grow hemp crops without fear of federal prosecution. Farmers Wayne Hauge and David Monson, who is also a Republican state representative, were awarded licenses from the state department of agriculture to grow hemp three years ago.

They sought approval from the Drug Enforcement Administration (DEA), and after the DEA failed to respond, they filed suit in US District Court in Bismarck. There, US District Judge Daniel Hovland dismissed their suit. The DEA considers hemp to be marijuana. It took a successful federal court challenge to force the DEA to continue to allow for hemp food products to be imported, but American farmers are still forced to stand on the sidelines and watch as their Canadian, Chinese, and European counterparts fill their wallets with profit from hemp sales.

Canada's Prince of Pot finds great irony in his pending extradition south of the border. "They're going to legalize marijuana in California, in Nevada, and much of the United States very soon," Marc Emery noted in a phone interview with the Georgia Straight.  "It's quite possible I'll be incarcerated even though I'm one of the people who provided the wherewithal for all these legalization movements to happen.

I'll be in jail being persecuted while they're out, Americans are actually out, celebrating." Emery is currently on bail from the North Fraser Pretrial Centre.  He faces a five-year sentence in a U.S.  prison for selling marijuana seeds from his Vancouver shop. Although all Emery can hope for is an immediate transfer to a Canadian jail, he has huge optimism about the future of the marijuana-legalization crusade that he helped nurture.

In 2009, measures to tax and regulate recreational marijuana were filed in the state assemblies of California, Massachusetts, New Hampshire, and Washington.  The group Nevadans for Sensible Marijuana Law has started work on a ballot initiative in 2012 to create a legal market.  Several states allow medical marijuana use. "Let's face it: the majority of Canadians want to legalize marijuana, and now the majority of Americans do as well," Emery said.

Researchers from the University of Trondheim, Norway, reported of a pregnant woman, who was a heavy regular cannabis user. THC metabolites (THC-COOH) were detectable in urine for 84 days after last use.

She was suspected to continue using cannabis despite denying any further use. Finally, her THC-COOH excretion profile supported her story.