USA: As the number of medical-marijuana dispensaries in the Inland area dwindles, patients are looking for other options while their advocates try to shield them from arrest. More than 160 members of the U.S. House of Representatives on Wednesday supported a and other actions against medical-pot outlets. The measure was defeated. Palm Springs officials are drafting an ordinance to allow medical-marijuana patients to grow pot at city-authorized collectives - despite a top federal prosecutor's warning that City Council members who approve such measures could be subject to federal prosecution. As storefront outlets close, groups that offer home deliveries of
medical pot are receiving a surge of calls from former dispensary patients. One Corona-based service has doubled its patient load in the past week. Only two or three of the seven medical-pot outlets in Riverside and San Bernardino counties that were open at the beginning of the year are still operating, patient advocates said. One, in Palm Desert, will close in September under pressure from the city and another, in Palm Springs, is being threatened with eviction. It is unclear whether a third dispensary, in Palm Springs, remains open, city officials said. Meanwhile an US city has placed a full ban on pot dispensaries: Fontana's (California) City Council unanimously passed a new ordinance Tuesday night prohibiting the operation of medical marijuana dispensaries within the city. In April, officials had placed a temporary ban on such businesses while the issue was being studied.  The Planning Commission subsequently produced an ordinance that bans any storefront dispensaries.

Canada: Neighbours asked to watch out for pot grow ops in New Brunswick. Crime Stoppers and the RCMP's marijuana enforcement team is asking New Brunswick residents to report any suspicious activity that could be related to marijuana grow operations. The team is telling citizens that marijuana growers usually move into a new neighbourhood in the spring, and rarely try to make an effort to become a part of the community. Shortly after moving into the home, sounds of working tractors, chain saws or gas trimmers come from the yard as they clear the lot. The marijuana enforcement team is asking citizens to call crime stoppers if they have information or they suspect an outdoor marijuana operation in their neighbourhood.

UK: Experts dismiss case of cannabis reclassification, but nevertheless the government begins its review of the classification. Drug experts said there was still insufficient evidence to reclassify cannabis, after a report suggested the drug could increase the risk of schizophrenia by at least 40%. The Labour MP Brian Iddon and Professor Robin Murray, of the Institute of Psychiatry, said there would be no benefit gained by restoring cannabis to a class B drug. Their comments came after a report published today in medical journal the Lancet estimated there were at least 800 people suffering serious psychosis in the UK as a result of smoking cannabis. The Home Office said last night that the report's findings would be considered in a review of the 2004 decision to downgrade cannabis to a class C drug. The review was prompted by fears that the potent "skunk" form of cannabis was triggering schizophrenia. Meanwhile Gordon Brown's Government begins its review of the classification of cannabis, with the probable outcome of relabelling it a class B drug of misuse. Possession would then become an offence likely to lead to arrest and perhaps a jail sentence. Cannabis was downgraded to class C in 2004, which meant
that the penalties for possession, production, or supply were reduced. The Advisory Council on the Misuse of Drugs will examine the evidence for harms caused by cannabis including those associated with the increasingly available strains such as skunk. In January, 2006, after its last review, the Advisory Council recommended that the class C status for cannabis should remain, but that resources should be put
into education about the risks of cannabis and into further research on its effects on mental health. 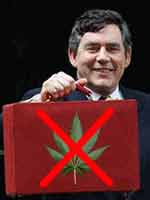