UK: Tories want to reclassify cannabis as a class B drug

UK: Tories want to reclassify cannabis as a class B drug

UK: The health risks of cannabis are so great that it should now be reclassified as a class B drug, carrying much greater penalties for possession and trafficking, says David Cameron's new blueprint for dealing with Britain's growing addiction problems. The Tory leader has been convinced by emerging evidence that modern strong forms of the drug are causing an epidemic of mental health disorders. A report being published last week by a Conservative policy commission will confront the issue, recommending an upgrading of the drug to class B, as well as arguing the case for a complete transformation of addiction treatment in Britain. This comes as Labour and the Tories go head to head on the issue of social breakdown, with both parties competing to show they have solutions that would strengthen families and prevent antisocial behaviour. The former Tory leader Iain Duncan Smith, who heads the commission, said to the Observer: 'We know now that cannabis is incredibly dangerous as a drug. For years people have been allowed to get away with this rather loose and wishy-washy idea that in the Sixties we took it and it didn't matter. But in the Sixties it was a much less potent drug, and now they have this stuff that is home-grown, which is at least 12 times more powerful.' He added: 'The real effect is on young kids who take it. We regularly have kids who take it at the age of 11 or 12. If your brain is growing, you can kiss goodbye to that - by the time you are 16 or 17
you will be in a psychotic state. It is an enormously dangerous drug, but a lot of middle-class families don't see that.' The government downgraded the drug to a class C in 2004 after concern that police were spending too much time arresting people for cannabis possession rather than focusing on tackling harder drugs. Although
possession is still a criminal offence, in practice, this means that most adults found with the drug are let off with a warning. 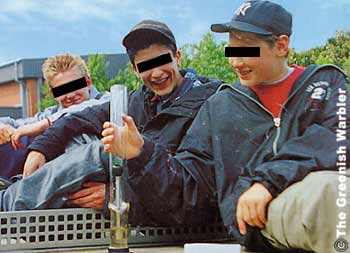 " Toking kids - will they all end up in a psychotic state of mind?"

USA: Rhode Island lawmakers voted on 21 June to make permanent the medical cannabis law. The House of Representatives and the Senate easily mustered the three-fifths majority needed to override Governor Don Carcieri's veto. The program, which would have expired June 30, allows patients with cancer, AIDS and other debilitating illnesses to possess up to 12 cannabis plants and 2.5 ounces (about 70 grams) of the usable drug to ease their symptoms. Good news also from New Mexico: Since 1 July the medical cannabis program is effective. Certified patients may possess up to six ounces of cannabis, four mature plants and three immature seedlings, which is enough for three months according to the Department of Health. The law also requires New Mexico to oversee a production and distribution system for the drug. The state Department of Health must issue rules by 1 October for the licensing of cannabis producers and in-state, secured facilities, and for developing a distribution system. New Mexico is the only state to create such a production system. This may cause problems since federal law does not allow the production and distribution of cannabis.

Science: THC and cannabis cause an increase in caloric intake and body weight in HIV-positive cannabis users. According to a clinical study at the New York State Psychiatric Institute with 10 HIV-positive cannabis users THC (dronabinol) and cannabis dose-dependently increased daily caloric intake and body weight. All patients completed two 16-day phases at the institute. All received THC capsules (5 and 10 mg) and cannabis cigarettes (2 per cent and 3.9 per cent THC) 4 times
daily for 4 days. Only one drug was active per day. All active phases were separated by 4 days of placebo administration. Cognitive performance were measured using a task battery measuring various aspects of learning, memory, vigilance and
psychomotor ability. Caloric intake was mainly increased by increasing the number of
eating occasions. Increase of body weight within 4 days was significant for the higher strength cannabis (four times 3.9 per cent THC) and the higher dose of oral THC (four times 10 mg) with 1.2 kg on THC and 1.1 kg on cannabis. THC and cannabis produced significant psychic effects, except for low-dose THC (5 mg). These effects were rated positively with little evidence of discomfort and no impairment of cognitive performance. Effects of cannabis cigarettes and oral THC were comparable, except that only cannabis (3.9 per cent THC) improved sleep. Researchers concluded that both oral THC and smoked cannabis "were well tolerated and produced substantial and comparable increases in food intake."

Science: CancerBritish researchers demonstrated that THC induced apoptosis
(programmed cell death) in cancer cells of tumours of the colon. They concluded that the use of THC may represent a novel strategy for therapy of cancer of the colon.