In the UK, Senior Liberal Democrats have urged the party's leadership to consider backing the legalisation of all drugs. Chris Davies MEP said the "war on drugs" had been lost and the only way to undermine the criminals controlling the trade was
legalisation. Speaking at a fringe meeting at the party's Brighton conference, he urged Lib Dems to lobby home affairs spokesman Nick Clegg to change policy. He was backed by education spokesman Baroness Walmsley. She told the meeting it was time to "think the unthinkable" on the drugs issue and consider legalisation.

Canada – Doug Hutchinson, the “Pot Prof”, after a long struggle got his own ventilated toking room within his college. Hutchinson, philosophy professor at Trinity College, has used marijuana for a serious and chronic health condition for over 10 years and recently won the right to smoke pot during work hours for an undisclosed medical condition. In an open letter to everbody at the college, he wrote: ”Greetings, philosophers. I thought I should let you know that as of this week our university has a professor who smokes marijuana openly on campus, legally, and with workplace accommodation for his need to use this remedy. I am that professor.”

America - marijuana user cards in Solano County up in smoke: Despite a boisterous and somewhat confusing debate  Tuesday, the Solano County Board of Supervisors rejected the possibility ofcounty administration of a  medical marijuana card program. With two Sheriff's deputies watching, the meeting was  far from typical. One supervisor supported the card program but  questioned marijuana's medical value. Steve Kubby, author of Proposition 215, in which voters  approved medical marijuana, spoke on behalf of those  pushing the card program. But with a 2-3 vote, supervisors narrowly rejected  development of a proposal administering the card  program. This followed a vote that simply amended the agenda allowing the recommendation vote to occur.

In another American county, there was a bad medical marijuana vote, too: Riverside County bans medical marijuana dispensaries. The Riverside County Board of Supervisors voted to prohibit medical marijuana dispensaries, calling them magnets for crime and citing federal laws prohibiting the drug. The decision comes nearly 10 months after Riverside County became the first county in Southern California to issue photo identification cards in an effort to comply with a 1996 state law shielding medicinal users from federal prosecution. But now, the supervisors voted 4 to 1 to reject a proposal to license four regional dispensaries in unincorporated parts of the county. The board also voted to outlaw marijuana-growing cooperatives and to join San Diego and San Bernardino counties in suing the state to overturn the state law requiring counties to issue medical marijuana cards. The counties contend that the federal prohibition of marijuana use takes precedence.

New study: Medical marijuana can help people with hepatitis C stay on treatment longer, leading to better outcomes, according to a study published in the October 2006 issue of the European Journal of Gastroenterology and Hepatology. The standard treatment for hepatitis C virus (HCV), a combination of interferon plus ribavirin taken for six months to a year, can cause side effects such as flu-like symptoms, insomnia, nausea, loss of appetite, and depression, which drive many patients to reduce their doses or stop treatment prematurely. If left untreated, hepatitis can lead to cirrhosis, liver cancer, and death due to liver failure.

Another good news from science: Nabilone reduces pain in patients with spasticity. Researchers of the University of Innsbruck, Austria, conducted a crossover study with the synthetic cannabinoid nabilone in 13 patients who suffered from chronic pain related to spasticity in chronic upper motor neuron syndrome. Participants received  both 1 mg nabilone per day in one treatment phase and a  placebo in another phase. 11 patients completed the study. Nabilone caused a significant decrease of pain, while spasticity, motor function and activities of daily living did not change. Side effects were generally low. Of the two patients who did not  complete the study, one patient experienced moderate transient weakness of the lower limbs and one experienced an acute relapse of multiple sclerosis. 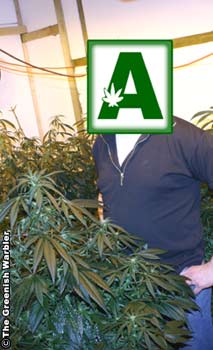 The German Cannabis Pharmacy celebrates its first year of existence.

The German underground project “Cannabis Pharmacy” (www.hanfapotheke.org) looks back on its first year. According to a press release, to date 43 patients have obtained access to the Cannabis Pharmacy through recommendation by a physician working with the pharmacy. 31 persons have donated cannabis at least once to supply these patients. 15 of these donors took responsibility for the entire supply of at least one patient, two donors adopted two patients and one donor adopted three patients. 22 patients are currently waitlisted without a supplier. The Cannabis Pharmacy has been working without interference by German law enforcement. The release says: "We still regard it as a scandal that we have to exist because politicians and authorities do not redress the suffering of severely ill people but in fact deny them the necessary medication and condemn them to avoidable pain and ailment. We realize that our project can not really address the true extent of this needless suffering but that is particularly why we must continue."