UK: Drug classes have little link to the dangers

UK: Drug classes have little link to the dangers

Britain's antiquated drugs laws stand accused of failing millions of people because they bear little or no relationship to the harm caused by everything from a hit of heroin to a seemingly harmless pint of lager. The Home Office has been warned by its own senior advisers that alcohol and tobacco are more harmful to the nation's health than the Class A drugs LSD and ecstasy. Research by medical experts, who analysed 20 substances for their addictive qualities, social harm and physical damage, produced strikingly different results from the Government's drug classification system. Heroin and cocaine, both Class A drugs, topped the league table of harm, but alcohol was ranked fifth, ahead of prescription tranquillisers and amphetamines. Tobacco was placed ninth, ahead of cannabis, which has recently been downgraded from a Class B to Class C drug, at 11th. Alcohol and tobacco, and solvents, which can also be bought legally, were judged more damaging than LSD (14th) and ecstasy (18th). The warning on alcohol comes amid growing alarm among ministers over a surge of "binge drinking" over the last decade. They fear it is fuelling rising levels of violent crime and creating long-term health problems for the nation. The research will put more pressure on the Home Office to a rethink the 35-year-old system for classifying illegal drugs as Class A, B or C substances. 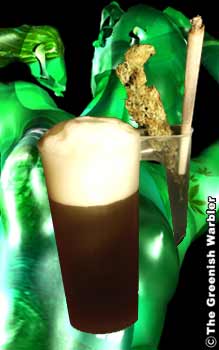 The eradication wave in Canada keeps on raging in the cannabis scene: An idyllic Saturday evening had a chaotic ending for Holy Smoke Culture Shop (located in Nelson) co-owner Paul DeFelice, who upon closing up shop last July 15, found himself surrounded by police and arrested on a warrant for two counts of trafficking a controlled substance in early June. After being taken to police headquarters in Nelson, four police officers executed a search warrant of the Holy Smoke Culture Shop, resulting in the seizure of marijuana, hashish, documents and currency. DeFelice: “I realized there was nobody watching -they boxed me and backed me into the shadows and nobody could see from the street, nobody could see from the lane, and I was feeling pretty freaked out,so I started yelling at the top of my lungs for a witness." With the arrival of a neighbour to witness the arrest, DeFelice was taken into lock up, where be spent four hours before being released.

Nelson police say the arrest was part of a wide-spread inquiry into narcotics issues in the region.

A new clinical study has shown that Nabilone is effective in the treatment of chronic pain. Physicians at a hospital in Vienna, Austria, conducted a placebo-controlled clinical study with nabilone in 30 patients who suffered from chronic therapy-resistant pain. The intake of nabilone was associated with a significant decrease in pain intensity of spinal origin, with a significant decrease of average headache intensity, and with an increase in quality of life. The number of study participants who favoured nabilone was more than 4 times higher than those who favoured placebo. Researchers concluded "that a majority of patients with chronic pain classify nabilone intake in addition to the standard treatment as a measure with a positive individual benefit-risk-ratio. Thus, this kind of treatment may be an interesting and attractive enrichment of analgetic therapy concepts."

Medical marijuana patients in San Diego will have the chance to oppose San Diego County's challenge to overturn California's "Compassionate Use" law, according to a tentative ruling Thursday by a Superior Court judge. Judge William R. Nevitt issued a tentative ruling that said several patients in Southern California who use marijuana medicinally - and represented by the American Civil Liberties Union, the Americans for Safe Access and the Drug Policy Alliance – could "intervene" and oppose San Diego County's lawsuit. The county angered local medical marijuana patients and state and national marijuana advocacy groups in December by filing a lawsuit seeking to overturn California's voter-approved, 1996 medical marijuana law.