UK: Children Trafficked From Asia to UK to Work in Cannabis

UK: Children Trafficked From Asia to UK to Work in Cannabis

UK: Youngsters Are Being Shipped Across the World and Held Captive in Towns and Suburbs Up and Down the Country. Hundreds of young children illegally trafficked into the UK are the new victims of Britain's booming cannabis trade. Figures obtained by The Independent on Sunday reveal that, as organised criminals push cannabis production to record levels, at least one child a week is being found by police raiding cannabis factories. Experts warn that children as young as 13 are been smuggled from
south-east Asia to work as "slaves" for gangs in dangerous conditions, being kept captive in towns and suburbs across the UK. They believe there has been a five-fold increase in the trade in the past 12 months. Police believe organised crime gangs, largely Vietnamese, have moved quickly to dominate the UK cannabis market after declassification in 2004 increased the potential rewards of growing and selling the drug
and decreased the risks of punishment. Gangs can reap up to UKP300,000 profit a year from a three-bedroom house converted into a cannabis factory. Children are brought in by gangs to tend the plants. Many have been found unable to escape through doors
or windows sealed and wired to give off dangerous electric shocks. Others fear reprisals against relatives if they try to escape. Police are currently raiding up to three houses a day where children are being discovered. "There is clear evidence that there are young people who are trafficked, bought and sold, for the purpose of forced labour in
cannabis production in the UK," said Christine Beddoe, director of the campaign group End Child Prostitution, Child Pornography and the Trafficking of Children for Sexual Purposes (Ecpat). "In the past 12 months there has been a 500 per cent increase in the
number of cases being reported to us. We now get told about one young person every week being removed from a cannabis factory. But nobody knows the true scale of the problem."

UK: Reclassification of cannabis fuels youth crime wave. In some areas, nine out of 10 take the drug - and those who work with them say the situation Is out of control. Cannabis use among Britain's young offenders is "out of control", up by 75 per cent in some areas and fuelling a crime epidemic, with youngsters stealing to fund their addictions, according to two studies. A national survey of Youth Offending Teams indicates that two-thirds of them have seen an increase in cannabis use of between 25 per cent and 75 per cent since David Blunkett, the then Home Secretary, downgraded the drug to class C in 2004. Some 90 per cent of all young offenders are using cannabis in some areas, a far greater proportion than the general youth population. Research carried out by King's College London has indicated that 25 per cent of young offenders in Sheffield have turned to crime to fund their habit. This contrasts with previous government research which said that "cannabis use was unlikely to motivate crime". A rise in young people smoking cannabis openly has led to a rise in the fear of crime in the community, leading Sheffield's police chief to warn of the threat that cannabis poses to the "fabric of society". Fifty out of 51 of the youth courts in England and Wales are so
alarmed that they have written to Jacqui Smith, the Home Secretary, urging an upgrading of cannabis back to class B. Within a month of Gordon Brown taking over as Prime Minister in June, Ms Smith signalled a review of the controversial decision to downgrade cannabis amid growing fears of the serious mental health implications of stronger varieties of the drug, first highlighted in the IoS in March.

USA: The state of Washington tries to define a standard dosage for cannabis. According to the medical cannabis law of the state of  Washington qualified patients may possess up to a 60-day  supply of cannabis. Now the state legislature wants to know
how much that is, since there is no standard dose and no standard method to use cannabis medicinally. Therefore the state is holding hearings to ask experts and citizens for their opinions on how to determine a two-month supply. Currently in each county, law enforcement effectively decides what constitutes a 60-day supply. Of the 12 states that protect medical cannabis patients from state prosecution, Washington is the only one without clear guidelines on the amount a patient or designated caregiver is allowed to possess. Oregon allows the largest supply - 24 ounces (about 680 grams) or six mature plants - and several states only allow patients to have one ounce (about 28 grams) of
usable cannabis on hand. In California, state law sets a limit of 8 ounces or six mature plants, but cities and counties are free to establish higher guidelines. There are fears among patients in Washington that the state might set the limit too low. Public comments on the issue will be accepted until the end of the year, and in early 2008, the department of health will publish a proposed rule. 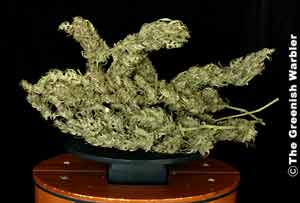 USA: Several states only allow patients to have one ounce (about 28 grams) of
usable cannabis on hand.

Science: Heart protection. According to a study of researchers of the Hebrew University in Jerusalem the non-psychoactive cannabinoid cannabidiol (CBD) protected the heart against damage by reduced blood supply in an animal study. A heart artery was ligated in rats for 30 minutes. In animals treated thereafter for 7 days with CBD infarct size was reduced by 66 per cent compared to non-treated rats.

Science: THC normalized impaired psychomotor performance and mood in a patient with hyperactivity disorder. Scientists at the Department for Forensic and Traffic Medicine of the University of Heidelberg, Germany, investigated the effects of cannabis on driving related functions in a 28 year old man with attention-deficit/hyperactivity disorder (ADHD). He had violated traffic regulations several times in recent years andhis driving licence was revoked due to driving under the influence of cannabis. He showed abnormal behaviour, seemed to be significantly maladjusted and his concentration was heavily impaired while sober during the first meeting with a psychologist. He was allowed to perform driving related tests under the influence of the cannabis compound dronabinol (THC), which his doctor had prescribed him to treat his symptoms. The examiner expected that he was not able to drive a car under the acute influence of THC. But at the second visit his behaviour was markedly improved and he performed average and partly above-average in all tests on reaction speed, sustained attention, visual orientation, perception speed and divided attention. A blood sample taken after the tests revealed a high THC concentration of 71 ng/ml in blood serum. He admitted later to have smoked cannabis and not taken dronabinol, because it was too expensive. Researchers noted that "people with ADHD are found to violate traffic regulations, to commit criminal offences and to be involved in traffic accidents more often than the statistical norm" and conclude from their investigation that "it has to be taken into account that in persons with ADHD THC may have atypical and even performance-enhancing effects."