UK: Cannabis is set to be reclassified as a class B drug amid fears over its effects on mental health, it was revealed today. Home Secretary Jacqui Smith has made clear she intends to reverse her  predecessor David Blunkett's decision in 2004 to downgrade the drug to class C. The Advisory Council on the Misuse of Drugs is due to report within the next few months on whether cannabis should be reclassified but Ms Smith has signalled that she is prepared to overrule the body if necessary. The Home Secretary, whose stance is strongly backed by Gordon Brown, believes the downgrading of cannabis sent the public the message that  it was harmless and legal to possess. In her letter to the Advisory Council on the Misuse of Drugs, Ms  Smith said: "Though statistics show that cannabis use has fallen  significantly, there is a real public concern about the potential  mental health effects of cannabis use, in particular the use of  stronger forms of the drug, commonly known as skunk. Since reclassification, the police have taken a "softly, softly"  approach which sees those in possession of large amounts of cannabis  often let off with a warning and confiscation. But as a class B drug, anyone caught in possession of cannabis could  face a five-year jail term and an unlimited fine. The penalty for  supplying would remain the same, with a maximum sentence of 14 years in jail. He said: "Why I want to upgrade cannabis and make it more a drug that people worry about is that we don't want to send out a message, just  like with alcohol, to teenagers that we accept these things." Ms Smith is also under pressure from police officers to tighten the law. The Association of Chief Police Officers, which originally  backed the downgrading, said that reclassification had created public confusion about the legality of the drug. 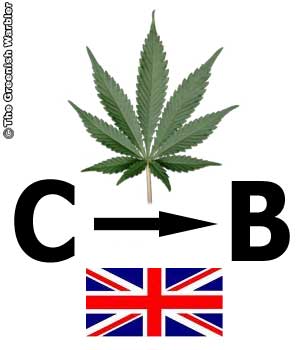 UK: Blunkett insists “I was right to downgrade it”. Former home secretary David Blunkett has launched an outspoken attack on Gordon Brown's plans for a tougher reclassification of cannabis saying it risks wasting police time on pursuing casual users of the drug. "I don't want the children of my Cabinet colleagues or the shadow Cabinet to find that they are treated differently from the way their parents were at university," he said.

Canada: Medical pot users win more freedom, can choose supplier. Canadians who are prescribed marijuana to treat their illnesses will no longer be forced to rely on the federal government as a supplier following a Federal Court ruling that struck down a key restriction in Ottawa's controversial medical marijuana program.  The decision by Judge Barry Strayer, released late yesterday, essentially grants medical marijuana users more freedom in picking their own grower and allows growers to supply the drug to more than one patient. It's also another blow to the federal government, whose attempts to tightly control access to medical marijuana have prompted numerous court challenges. Currently, medical users can grow their own pot but growers can't supply the drug to more than one user at a time. Lawyers for medical users argued restriction effectively established Health Canada as the country's sole legal provider of medical marijuana. They also said the restriction was unfair, and prevented seriously ill Canadians from obtaining the drug needed to treat debilitating illnesses. In his decision, Strayer called the provision unconstitutional and arbitrary. Ottawa must also reconsider requests made by a group of medical users who brought the matter to court to have a single outside supplier as their designated producer, Strayer said in his 23-page decision. Ottawa could either rewrite the regulations, come up with a new ratio, "or they can simply leave it as an open market so that people who are experienced and have the right secure facility will be able to apply to grow for 10 patients, 20 patients," Young said. There are about 2,000 people legally allowed to use marijuana for medical purposes but fewer than 20% buy it from the government's supplier.  Some patients say the quality is poor and others say only one strain of the plant is offered -- different strains having unique therapeutic effects.