British Conservative leader David Cameron was disciplined as a 16-year-old pupil at Eton for smoking cannabis. Cameron, who has always refused to discuss whether he has used drugs, was reportedly caught up in a police investigation into drug dealing
at his school. He was apparently "gated" - confined to school grounds - for two
weeks after confessing to a master. A friend said the Tory leader and other schoolboys had been "snitched on" by pupils who had been dealing in the drug. A total of seven pupils were expelled following police inquiries, which are said to
have included a search of pupils' rooms by a drugs squad. Cameron's confession of smoking what the friend called a "spliff" saved him from greater punishment, despite his refusal to tell masters who else was involved. Further details of the Eton incident are expected to be included in a forthcoming biography of Cameron by two journalists that also claims he smoked cannabis at Oxford. The disclosure is likely to lead to fresh questions over Cameron's past. During his campaign for the Tory leadership in 2005, he rode out questions about drug-taking by refusing to comment except to say
that MPs had the right to a private life before they came into politics.

Poland: Due to the steadily growing cannabis scene in Poland, a cannabis magazine called “Spliff” was founded, with the first issue hitting stands in February. The Spliff team consists of five members and intends to cover all relevant cannabis topics. 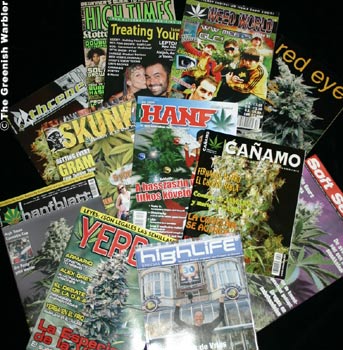 USA: Pot prisoners cost Americans $1 billion a year. Nearly 800,000 Americans were arrested on marijuana charges in 2005. When will the insanity stop? American taxpayers are now spending more than a billion dollars per year to incarcerate its citizens for pot. That's according to statistics recently released by the U.S. Department of Justice's Bureau of Justice Statistics. According to the new BJS report, "Drug Use and Dependence, State and Federal Prisoners, 2004," 12.7 percent of state inmates and 12.4 percent of federal inmates incarcerated for drug violations are serving time for marijuana offenses. Combining these percentages with separate U.S. Department of Justice statistics on the total number of state and federal drug prisoners suggests that there are now about 33,655 state inmates and 10,785 federal inmates behind bars for marijuana offenses. The report failed to include estimates on the percentage of inmates incarcerated in county and/or local jails for pot-related offenses. Multiplying these totals by U.S. DOJ prison expenditure data reveals that taxpayers are spending more than $1 billion annually to imprison
pot offenders.

USA: The Rosemead City Council (California) has adopted a temporary ban on
medical marijuana clubs, joining the growing ranks of cities withprohibitions against the establishments. The moratorium, which received unanimous council support, temporarily prevents marijuana dispensaries from operating within city limits,
officials said. The city now has less than a month to decide whether to extend the
moratorium for another 10 months. After that period, the council will vote on a permanent policy, city officials said. Many cities have been waiting for state and federal laws to reconcile differences, said Rosemead City Manager Andrew Lazzaretto. In the meantime, Lazzaretto said the city decided to be "pro-active." "A lot of cities were waiting for the laws to straighten out," Rosemead City Manager Andrew Lazzaretto said. "It is better to get out in front of the issue."
In the meantime, the California Supreme Court agreed to consider whether being a primary caregiver can be a defense against criminal charges of cultivating marijuana under the state's 1996 medical marijuana law. In a case out of Santa Cruz, the justices voted to review a decision in October by the San Jose-based 6th District Court of Appeal, which found that a jury should have been allowed to hear the defense in the 2005 trial of a medical marijuana advocate. The 6th District
overturned the conviction of Roger Mentch for cultivating marijuana and possession of marijuana for sale because a trial judge excluded the defense. The case will be the latest in a string of rulings from the state Supreme Court that have defined the boundaries of Proposition 215, which legalized the use of marijuana for certain medical conditions. Federal law still bans any use or distribution of marijuana. Mentch ran the Hemporium, a care-giving service and marijuana collective in Felton, when his legal troubles began in 2003. The issue before the Supreme Court is whether he - and others in his position across the state - can argue that a primary caregiver who
supplies marijuana to medical clients should not be prosecuted on drug cultivation and possession charges.