USA: "Guru of Ganja" Ed Rosenthal is bringing in another martyr of the marijuana movement to help him raise funds for his upcoming federal trial. Tommy Chong - half of of the Cheech and Chong comedy duo renowned for stoner movie classics such as "Up in Smoke" and "Nice Dreams" - will appear a $125-per-head event March 4 at Rosenthal's Lake Avenue home in Piedmont. Some advance tickets are available for only $100 at Rosenthal's legal defense fund's Web site, www.green-aid.com "The party will celebrate how far we've come in legalizing medical marijuana as well as provide me with the money I need to fund my current trial that is defending all of our rights," Rosenthal, 62, said in an e-mail Thursday. He's scheduled to appear in federal court March 19, and he estimates his trial and related expenses could cost more than $300,000.

Switzerland: The Health Commission (SGK) of the Nationalrat rejected the peoples initiative “for a reasonable cannabis policy with an effective protection of minors” by 14 to 9 votes and 1 abstention. The intiative had already been rejected before by the Bundesrat. It would decriminalise the cultivation, possession, trade and use of cannabis in Switzerland. But there were not only bad news for human cannabis users in the Alp country: The Federal Office of Agriculture (BLW) pointed out again that its is forbidden to feed productive livestock with cannabis – no cannabis for cows. They argue that the THC would pass from the cannabis to the milk. 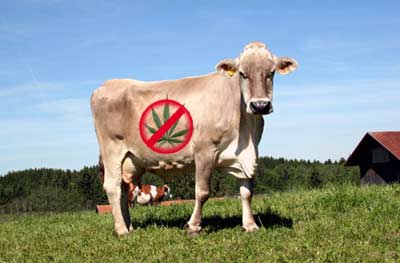 It is not allowed to feed Swiss cows with cannabis!

Czech Repulic: The Czech Republic ranks first in terms of its number of marijuana smokers, according to the annual report by the EU drug agency for the year of 2006. Contrary to the general EU trend towards decreasing cannabis user numbers, there is a strong increase in the Czech Republic, where 22% of the people aged between 15 and 34 are consuming cannabis – the highest share in Europe and equalling the level of the USA. Last week, the Czech Supreme Court corrected a report by the daily paper “Mladá fronta Dnes” (Prag) that according to a verdict by the Supreme Court, cannabis cultivation would be legally possible for everybody in The Czech Republic and emphasised that cultivation still is illegal. The newspaper had presented the decisive passage of the verdict in a shortened form, arousing the impression that cannabis cultivation was only illegal, if the plants were dried and processed into marijuana or hashish.

Holland: The 10th Highlife Fair in the RAI complex in Amsterdam was successful again, 17.000 visitors attended the event and during the three days strolled along the 109 exhibitor boothes. In addition to the proclamation of the winners of the Highlife Cup, a beautiful Miss Highlife was chosen again.

Science: A new study, just published in the journal Neurology, confirms the value of medical marijuana for people with HIV/AIDS. This particular study dealt with peripheral neuropathy, a painful condition caused by damage to the nerves of the feet and other extremities caused by HIV or by some of the medications used to treat it. It can range from mild tingling to pain so extreme that, as writer and AIDS activist Phil Alden puts it, "It can feel like you're being stabbed with a knife, or like your feet and hands are on fire." Neuropathic pain-also experienced by many suffering from multiple sclerosis, diabetes and other ailments-is notoriously difficult to treat. Indeed, there are no FDA-approved drugs to treat HIV neuropathy. None. Zero. But in the new study, conducted by Dr. Donald Abrams of the University of California, San Francisco, marijuana clearly helped. To be sure the effect they were seeing was real, Abrams and colleagues tested the effects of marijuana against both neuropathy and against a special type of lab-induced experimental pain. In both cases, marijuana clearly reduced the pain for most patients. And one has to bear in mind that most participants were already on other medications for their pain, and getting little enough relief that they felt the need to participate in an experimental study.