London: Metropolitan Police officers subjected suspects to waterboarding, according to allegations at the centre of a major anti-corruption inquiry, The Times has learnt. The torture claims are part of a wide-ranging investigation which also includes accusations that officers fabricated evidence and stole suspects’ property.

It has already led to the abandonment of a drug trial and the suspension of several police officers. However, senior policing officials are most alarmed by the claim that officers in Enfield, North London, used the controversial CIA interrogation technique to simulate drowning. Scotland Yard is appointing a new borough commander in Enfield in a move that is being seen as an attempt by Sir Paul Stephenson, the Met Commissioner, to enforce a regime of “intrusive supervision”.

The waterboarding claims will fuel the debate about police conduct that has raged in the wake of hundreds of public complaints of brutality at the anti-G20 protests in April. The part of the inquiry focusing on alleged police brutality has been taken over by the Independent Police Complaints Commission. It is examining the conduct of six officers connected to drug raids in November in which four men and a woman were arrested at addresses in Enfield and Tottenham. Police said they found a large amount of cannabis and the suspects were charged with importation of a Class C drug.

The case was abandoned four months later when the Crown Prosecution Service said it would not have been in the public interest to proceed. It is understood that the trial, by revealing the torture claims, would have compromised the criminal investigation into the six officers. None of the officers under suspicion has been arrested, but the IPCC said last night: “This is an ongoing criminal investigation and as such all six officers will be criminally interviewed under caution.

” A Scotland Yard spokesman said: “Whilst the investigation is ongoing it is not appropriate to make assumptions. These are serious allegations that raise real concern. The Met does not tolerate conduct which falls below the standards that the public and the many outstanding Met officers and staff expect.” 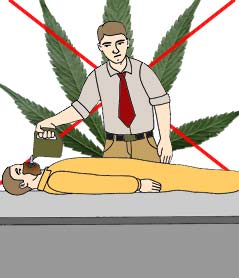 But when one NDP member could not make it to parliament, the filibuster collapsed, and the Liberal Party leadership joined with the Conservatives in forcing a successful vote. It also came after committee hearings on C-15 in which 13 of 16 witnesses, including criminal justice, health, and harm reduction experts, testified against the bill.

Among them was US Criminal Justice Policy Foundation head Eric Sterling, who drafted mandatory minimum legislation for Congress as House Judiciary Committee counsel in the 1980s and saw the flawed politics firsthand. The bill next goes to the Canadian Senate. Unlike the US, Canadian senators are appointed, not elected, and the Canadian Senate typically -- but not always -- defers to the House.

Observers hold out some hope that in this case, the Senate, which called for the legalization of marijuana in a 2002 report, will seek to block or amend the bill. The Senate could also effectively kill the bill by refusing to act on it before new elections are called. Under the measure, mandatory minimum sentences would be enacted for a number of drug offenses, including an automatic six-month jail term for growing as few as five marijuana plants.

Growing more than five plants would earn a mandatory minimum two-year sentence, and mandatory minimum sentences would also be in effect for other drugs, such as cocaine and methamphetamine. "I think it is really bad news," MP Libby Davies (NDP-Vancouver East) told Vancouver's Cannabis Culture magazine. "The evidence shows very, very strongly -- overwhelmingly -- that mandatory minimum sentencing is not an effective policy when it comes to drug crime.

My fear is that we are going to see more people in jail, and more people fighting charges because they know they will be facing a mandatory minimum sentence. That means more court time and more backlogs."

A federal judge in Los Angeles sentenced Morro Bay medical marijuana dispensary operator Charles Lynch to a year and a day in federal prison Thursday in one of the first sentences to be handed down since the Obama administration said it was adjusting federal policy on medical marijuana.
Lynch was scheduled to be sentenced earlier this year, but US District Judge George Wu postponed that hearing with federal medical marijuana policy up in the air. Lynch was convicted of five marijuana-related offenses last year for operating his dispensary in Morro Bay in San Luis Obispo County even though the dispensary was licensed and operated with the approval of local authorities -- except for the sheriff, who turned to the feds after being frustrated in his efforts to shut down the operation of which he did not approve, but which operated in accordance with state law.

Rhode Island will become the third state in the nation to enact a dispensary system to distribute medical marijuana to seriously ill patients after the state Senate joined the House in passing S185, the Edwin O. Hawkins and Thomas C. Slater Medical Marijuana Act by veto-proof margins.

As of Thursday afternoon, the bill was on the governor's desk. Gov. Donald Carcieri (R) has been a consistent foe of medical marijuana, vetoing bills in previous years. But with the Senate voting 30-2 to adopt the measure and the House voting 64-4 in favor last week, a Carcieri veto should be easily overridden. The measure would permit three dispensaries to operate to sell marijuana to medical marijuana patients.

Nearly 700 patients have registered with the state Department of Health since legislators approved a medical marijuana law there in 2006. Under that law, Rhode Islanders suffering from chronic pain, seizures, multiple scleroris, severe nausea, or Alzheimer's are allowed to possess up to 12 plants and 2.5 ounces of marijuana. But the law carries no provision for patients unable or unwilling to grow their own medicine to obtain it elsewhere. While 13 states have medical marijuana laws on the books, only two of them, California and New Mexico, allow for dispensaries.

A moratorium on medical marijuana shops was extended to one year during a Grass Valley City Council meeting Friday. The council had enacted a 45-day moratorium April 28 after police Chief John Foster requested the emergency ordinance, telling council members crime has escalated around other marijuana dispensaries in California.

At the April meeting, council members said they did not want a full-fledged ban and asked Foster and city staff to come up with rules and regulations about medical pot shops in case anyone applied to open one.  Since then, an application for a medical marijuana business license has been turned into Foster, but it has not been formally filed with the city. Foster requested an extension on the moratorium Friday, telling the council members his staff needed more time to create a regulatory ordinance.

The extension would be for 10 months and 15 days; Foster said he didn't think additional time would be needed beyond that. Carole Chapman of Americans for Safe Access, a Grass Valley resident, was one of only two people who addressed the council during the very lightly attended meeting. I'm sorry to hear you're extending the moratorium," she said.

"I think this is something the city needs." Both Mayor Lisa Swarthout and Vice Mayor Jan Arbuckle pressed Foster for a quicker end to the moratorium, possibly within four months. I'd like to bring this matter to a closure, depending on staff time," Foster said.  "It's my hope to get this done as quick as possible."