The UK Hemp & Hydro Expo 2006 has been cancelled

The UK Hemp & Hydro Expo 2006, scheduled for 28-30 July in Coventry, has been cancelled in the last minute by the directors of the newly opened Ricoh Arena
where the event should have taken place. 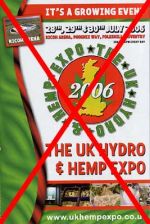 The UK cannabis magazine Weed World
had organised the event and now finds itself confronted with a pile of shards. They
report: "The reason we have been given by the board for cancelling the show, lies
within certain recent media coverage within the UK and their connection with
certain exhibitors. Their reasons: Unhappy with certain exhibitors and their
products. The local Constabulary were contacted by Ricoh for their advice - the
Police had no concerns with the event going ahead - as long as it were managed
correctly." Nevertheless, the board of directors decided to cancel it, out of political reasons, obviously they

feared that the new arena would get a negative image right from the start.
Weed World deeply regrets this u turn in policy and promised that
anyone who has a stand booked will be refunding in full. They are also trying to get
compensation for those who have arranged shipments to the UK from abroad.
Weed World is desperately contacting people from as far away as Japan telling
them to cancel their flights. They are now working to rearrange the event, but it
looks like that will not be until next year due to the logistics of organising what was
a popular, as well as very professionally run event.

Once again, plans for the legalization of marijuana production for the coffeeshops
are reported from the Netherlands. The majors of 20 of the 30 biggest cities of the Netherlands support a legalization of cannabis production for the sale of
marijuana in the country`s coffeeshops.
The plans to allow production are supported by Alexander Pechthold, the
minister responsible for inner-city problems. The Parliament of the Netherlands has already discussed this issue several times and voted for the start of a pilot
project near Maastricht, but the Dutch government so far has blocked this proposal.

USA: The American Civil Liberties Union (ACLU), Americans for Safe Access and
the Drug Policy Alliance moved on 7 July to intervene in a lawsuit brought by several California counties that seeks to overturn the state's law, which makes
medical cannabis legal for patients with a doctor's recommendation.
"The law is clear:
federal marijuana laws do not trump California's ability to make medical marijuana
legal under state law," said Allen Hopper, an attorney with the ACLU Drug Law
Reform Project. San Diego, San Bernardino and Merced counties argue that
federal laws prohibiting all use of marijuana invalidate state laws that allow
qualified patients to use medical marijuana. In the past two years, the number of
medical-marijuana dispensaries in San Diego County for example has grown from
zero to roughly two-dozen, most ofthem located within San Diego city limits, with
another dozen medical-cannabis delivery services focused solely on bringing
pot to a person's home.

A suprising news comes from the scientific sector: Cannabidiol (CBD) was shown
to increase wakefulness in the lights-on periods in an animal study. Researchers
conclude that CBD "might be of therapeutic value in sleep disorders such as
excessive somnolence." Well, ordinary cannabis smokers so far rather have
gained contrary experiences: Marijuana or hashish with a high CBD content
regularly makes them feeling numb and tired. However, there are hardly any
cannabis users that have ever smoked pure CBD …