California: Governor Arnold Schwarzenegger recently vetoed a bill that would have legalized growing hemp in California. The Santa Cruz County Farm Bureau was frustrated with the veto, saying growers are always looking for viable crop alternatives, and that hemp could have been one given demand. But Schwarzenegger said while he supports the development of new crops in the state, he felt he could not approve the legalization of hemp, a type of cannabis related to marijuana but without the euphoric effects: "Unfortunately, I am very concerned that this bill would give legitimate growers a false sense of security and a belief that production of 'industrial hemp' is somehow a legal activity under federal law." State Assemblyman Mark Leno, D-San Francisco, introduced AB 1147 this year to reduce the reliance of U.S. man-ufacturers on imported hemp from Canada and China. Monday, Leno called the veto just "short of absurd. It's just another example of myth and politics trumping science and sound public policy," he said. "But we're not through yet. We're not going to give up. I'll probably try to introduce it again ... in January."

Switzerland - The World Anti Doping Agency (WADA) has defended the continued inclusion of cannabis on its prohibited list of substances following criticism that the ban is placing unnecessary strain on sporting federations. IAAF council member and Spanish athletics federation president Jose Maria Odriozola raised concern about the cannabis ban on Sunday during a round table discussion on "borderline issues" at an international anti-doping symposium organised by the world athletics governing body. According to Odriozola, federations are "wasting considerable time and money, dealing with what is essentially a recreationalnon-performance-enhancing drug." Odriozola's comments were firmly rejected by WADA's director of science, Olivier Rabin. "We have three criteria for including something on our list of prohibited substances and methods, at least two of which have to be met - performance enhancement, possible health dangers and a contravention of the spirit of sport," Rabin told Reuters. "We know full well that cannabis can alleviate feelings of fear which can help performance in some sports. "It is also risky for athletes and others around them as it can cause a distortion of perception and we also believe it violates the spirit of sport even though we understand it is mainly a social drug." Cannabis has been included on WADA's list of banned substances and methods since the list's creation in 2004. It remains on the new version of the annually-revised list which was approved by WADA's executive committee last month and comes into force on January 1. 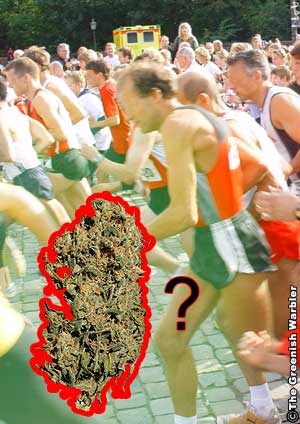 A dozen Northern Nevada religious leaders plan to announce today they support the initiative to legalize marijuana. "I know of no place else in the country where a group of religious leaders is coming together to speak with a unified voice with regulating marijuana," said Troy Dayton, associate director of the Interfaith Drug Policy Initiative. The Interfaith Drug Policy Initiative addresses drug policies issues nationwide and is working with the Committee to Regulate and Control Marijuana.  The list of 32 churches, mostly in Las Vegas and Reno, includes Christians and Jews, mainline denominations and several black churches. Question 7 on the November ballot would allow those 21 and older to legally possess, use and transfer 1 ounce or less of marijuana. It also would regulate the sale of marijuana and increase criminal penalties for causing death or substantial bodily harm when driving under the influence of drugs or alcohol.

Good news for aging hippies: smoking pot may stave off Alzheimer's disease. New research shows that the active ingredient in marijuana may prevent the progression of the disease by preserving levels of an important neurotransmitter that allows the brain to function. Researchers at the Scripps Research Institute in California found that marijuana's active ingredient, delta-9-tetrahydrocannabinol, or THC, can prevent the neurotransmitter acetylcholine from breaking down more effectively than commercially marketed drugs. THC is also more effective at blocking clumps of protein that can inhibit memory and cognition in Alzheimer's patients, the researchers reported in the journal Molecular Pharmaceutics. The researchers said their discovery could lead to more effective drug treatment for Alzheimer's, the leading cause of dementia among the elderly.