The Netherlands I: While in the USA political cannabis relaxation takes place thanks to president Obama, nevertheless Dutch police is going crazy and has just presented the mini-helicopter “Cannachopper”, a sniffer machine that looks like a K9 with wings. 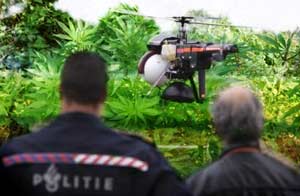 The unmanned craft is loaded with odor and video detection instruments so that it can identify fields of hemp from the air, and then call in backup to make the bust. On its maiden voyage in Silvolde it managed to locate a cannabis farm and officers arrested seven growers and recovered several kilos of the outlawed weed. Now all it needs is a gun attached to its underside and it could make its own arrests…

The Netherlands II: Coffeeshops in Dutch Border Region to Go Members Only?

All of the cannabis cafes in the Dutch border province of Limburg may be turned into members-only clubs in a bid to stop "drug tourism," the Dutch newspaper Volkskrant reported over the weekend. The proposal came from Gerd Leers, the mayor of Maastricht, the largest town in the province. Limburg hosts 30 of the cannabis cafes, also known as coffee shops, that attract thousands of visitors from the less cannabis-friendly neighboring countries of France, Belgium and Germany each year.

The influx of foreign pot buyers has resulted in problems ranging from traffic congestion to public nuisances to dealing of hard drugs. Under the Leers proposal, foreigners would not be barred from membership in the clubs, but would have to wait several days to buy cannabis. The proposal would thus discourage spur of the moment cannabis purchases, but would not prevent foreigners who plan ahead from being able to purchase cannabis once they have become members. Leers' proposal also foresees banning cash sales, which would allow all sales to be traced, thus discouraging foreigners.

Leers is also proposing reducing the amount of cannabis that can purchased from five grams to three grams. He said few foreigners would bother to drive to Holland for such a small quantity. [But Leers did not explain why foreigners would bother to drive to Holland to purchase only two grams more now, or what would stop them from visiting multiple cannabis cafes in a European version of smurfing.

According to the Volkskrant, the Dutch home affairs and justice ministries have reacted favorably to the plan. While the conservative Dutch government would like to eliminate cannabis cafes altogether, it has pledged not to act until after elections next year. In the meantime, effective regulation of the cannabis cafes is in the hands of local authorities, such as Maastricht Mayor Leers. Cannabis cafe owners declined to discuss their views on the proposal. They said they would wait to react until the proposal is formally presented May 12.

Canada/British B.C.: 65 per cent in B.C. want marijuana to be legalized!

The majority of British Columbians think the legalization of marijuana would reduce violence related to the drug trade, an Angus Reid Strategies poll suggests. Sixty-five per cent of the respondents would legalize marijuana in order to minimize violence, while 35 per cent think harsher penalties for marijuana trafficking are the answer.

"The illegal marijuana industry is linked to much of the gang violence on B.C.'s streets," said the poll, which asked respondents to choose between either the legalization of pot or increased penalties as a way to decrease violence. Police have linked at least 17 of this year's 34 homicides in the Lower Mainland to gangs or drugs. The poll also found 77 per cent of Green party and 74 per cent of NDP voters support legalizing pot. "The poll shows that people are way ahead of politicians on this issue," said Neil Boyd, a criminologist at Simon Fraser University.

The Mexican Senate Tuesday approved a bill that would decriminalize the possession of small amounts of drugs in a bid to undercut Mexican drug trafficking organizations and free police to go after them instead of drug users. The bill was backed by the conservative government of President Felipe Calderon. Under the bill, personal use quantities of drugs could be possessed without criminal liability.

The quantities include up to five grams of marijuana, a half gram of cocaine, and smaller quantities of drugs such as heroin and methamphetamine. The bill would also shift the prosecution of low-level drug dealers to the states by making it no longer a federal crime to sell drugs. The federal government currently prosecutes all drug trafficking offenses, but because federal courts are busy trying higher-level drug traffickers, the cases of lower-level offenders rarely get tried.

The Mexican Congress passed a similar measure in 2006 under President Vicente Fox, but Fox vetoed that bill under pressure from the US. Now, after 10,000 deaths in 2 1/2 years of Calderon's drug war, Mexico appears less inclined to heed US demands to not decriminalize -- and given the change of administration in Washington, the US seems less likely to demand Mexico remain a drug war hardliner when it comes to small-time possession cases. The measure must still pass the Chamber of Deputies. The congressional session was supposed to end Thursday, but there is some chance it will be extended because of the flu emergency in the capital.

After striking a deal with federal prosecutors, two employees of erstwhile Vancouver pot seed entrepreneur, continuing marijuana legalization activist and Cannabis Culture magazine publisher Marc Emery pleaded guilty in federal court in Seattle last Friday to conspiracy to manufacture marijuana. They will be formally sentenced June 17, according to a press release from the US Attorney's Office for Western Washington in Seattle.

Along with Emery, employees Michelle Rainey and Gregory Williams became known as the BC 3 after they were indicted by a federal grand jury in Seattle on marijuana distribution charges because of Emery's seed sales enterprise. Authorities in Canada, where marijuana seed distribution is of ambiguous legal status, knew of Emery's business for years, but failed to act harshly against him or his employees. Rainey and Williams accepted the guilty pleas on the condition that they be sentenced to two years probation to be served in Canada.

Both defense attorneys and prosecutors will recommend that sentence. The judge is not bound to agree to that sentence, but the plea agreement stipulates that either party can call off the deal if the judge does not agree to that sentence. According to court documents, Rainey filled mail orders for seeds, 75% of which were destined for customers in the US. Williams handled phone orders and walk-in customers. He confirmed Emery's claims that the company was grossing more than $3 million a year in seed sales.

Emery ploughed much of his profits back into the marijuana legalization movement and is known as the Prince of Pot for his loudly held positions. US DEA administrator Karen Tandy crowed at the time of his 2005 indictment that his arrest had dealt a blow to legalization forces, but prosecutors later claimed no political motivation for the bust of one of the drug war's loudest critics. Rainey and Williams will be formally sentenced June 17. Emery's fate remains unclear. He continues to fight extradition from Canada, and a hearing in the British Columbia Supreme Court is set for the first week of June.

New Hampshire is poised to become the 14th medical marijuana state after a bill legalizing the therapeutic use of marijuana passed the state Senate on a 14-10 vote Wednesday. A similar measure has already been approved by the House. The Senate amended the bill to include a panel to review questions of how patients would access medical marijuana. It also strengthened privacy provisions in the bill.

Those changes are seen as minor and are expected to be approved by the House. The bill would allow patients or their caregivers to grow up to six marijuana plants and possess up to two ounces of usable marijuana. Only patients with enumerated conditions, including chronic pain, seizures, muscle spasms, and severe nausea or vomiting, would be eligible under the bill.

For the second time, the Rhode Island Senate has approved a bill that would allow dispensaries to provide marijuana to patients qualified under the state's existing medical marijuana law. The bill now heads to the House, where a committee vote was scheduled for Thursday. Rhode Island approved a medical marijuana law in 2006, but that law did not provide a legal avenue for patients unable to grow their own medicine or find a caregiver to grow it for them to otherwise procure it. The bill would create "compassion centers" for the distribution of marijuana to people with severe, debilitating illnesses, including cancer, Hepatitis C, and HIV/AIDS. Some 681 people are already registered with the Rhode Island Department of Health under the state's medical marijuana program.

The Senate approval of the compassion center program came on a 35-2 vote Wednesday. The vote came after bill sponsor Sen. Rhoda Perry (D-Providence) told her colleagues support for the bill was growing and it appeared the state police had dropped their opposition. And the Minnesota Senate Wednesday approved SF 97, the state's medical marijuana bill. Victory came on a narrow 36-28 vote after debate pitting concern about those suffering from the pain of serious illness against fears that allowing patients to use marijuana would result in an increase in drug abuse in the state.

Law enforcement has consistently opposed the medical marijuana bill. But Sen. Steve Murphy (DFL-Red Wing) said during the debate that the issue is a medical issue, not one to be decided by "our brothers and sisters in blue." The Senate has passed medical marijuana legislation before, but it has not been approved by the House. Advocates, such as the Marijuana Policy Project-backed Minnesotans for Compassionate Care, believe they have the votes to pass the House this year, but they still face a veto threat from Gov. Tim Pawlenty (R). Whether either chamber could muster the votes to override a veto is questionable. The House is expected to take up the bill next week.