The Netherlands: Tilburg wants to experiment with legal cannabis cultivation

The city council of Tilburg considers the time is ripe for an experiment with legal cannabis cultivation. The parties PvdA (Social democrats), VVD (Right Liberal), GroenLinks (Left-ecologic), AB (Local party) and D66 (Left Liberal) want that the city starts preparing such a project, as they all support a proposal from the SP (Socialist party). The fractions represent a broad majority (25 of 39 seats) in the
Tiulburg city council. A similar proposal of the city of Maastricht failed last year to
obtain the support of Dutch Parliament, when the VVD withdrew her support at the very last moment, and there was no longer a majority. PvdA, GroenLinks, and D66 were in favour of the proposal then. Minister Donner (Justice) even suggested then that he would resign if the experiment would obtain sufficient support. Good moment Local SP-chairman Johan van den Hout in Tilburg thinks that now the good moment has come for the controversial cannabis experiment. He refers to the negotiations on a new government coalition which are currently going on in the Netherlands after the elections of 22 November. "The city of Tilburg has to prepare itself concretely on the allowance of regulated cultivation of cannabis'', says the proposal of the SP. The parties consider that illegal cultivation in indoor plantations is causing problems for neighbours, security risks and criminality. The council urges lord mayor Ruud Vreeman of Tilburg to start lobbying in the Hague together with friendly collegues in The Hague. 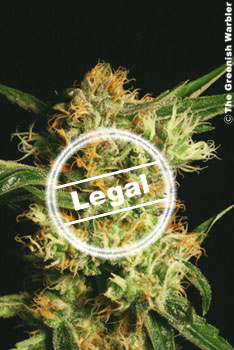 Will a legal cannabis cultivation experiment finally take place in the Netherlands?

England: Cannabis users will be arrested and charged if they are found in possession of the drug three times, under new guidelines. Police forces are also being told to improve their intelligence systems so that officers questioning suspects can radio their control rooms and apply the "three strikes" rule if the user has already been warned twice. In the guidance, officers are told: "These guidelines do not encourage the same offender being repeatedly warned for possession of cannabis. Where it can be verified that an offender has received two previous cannabis warnings then a further warning should not be considered." Under the guidance sent out to all forces in the past few days, children under the age of 18 caught smoking cannabis will no longer be automatically arrested. The guidelines say that officers should find "less intrusive" ways of dealing with under-18s, such as escorting them home. Martin Barnes, of DrugScope, the advice group, said: "We welcome the new guidance, which strikes the right balance between personal possession of small amounts of the drug and the offence of supply.”

England: Three people who supplied thousands of chocolate bars laced with cannabis to multiple sclerosis sufferers walked free from court last week. Mark Gibson, 42, his wife Lezley, 42, who has multiple sclerosis (MS), and Marcus Davies, 36, were each given a nine-month jail term, suspended for two years. All three defendants argued that the drug eased the symptoms of MS and believed they had a defence of medical necessity but this was rejected by a jury last month. Sentencing at Carlisle Crown Court, Judge John Phillips said he accepted their motives were "altruistic", that they had a genuine desire to help people who were suffering and that no profit was made from the operation. The judge said that current sentencing guidelines substantiated a significant custodial sentence but he accepted there were exceptional circumstances in this case, although he disagreed that a conditional discharge was appropriate. He said: "The conspiracy to supply drugs took place over a number of years in what was a sophisticated operation in which several kilograms of cannabis were distributed." All three were convicted of two counts each of conspiring to supply cannabis throughout 2004 and until February 2005. The "cottage industry" made and supplied 20,000 of the Canna-Biz bars, each containing around 2g (0.07oz) of the drug. The customers made a donation to cover costs and had to provide a medical note confirming their condition. The Gibsons, of Alston, Cumbria, insisted it was a free service and they made no secret of their activity, with advertisements in both the regional and national media.