The Netherlands: New government wants to turn all coffeeshops into members-only clubs

The three parties on the verge of forming a new coalition government unveiled their coalition agreement on Thursday, under the motto 'freedom and responsibility'. The pact is the result of two months of negotiations between the Christian Democrats, right-wing VVD and anti-Islam PVV. The PVV will support the VVD and CDA on a number of issues but will not have ministers and is not officially part of the government. 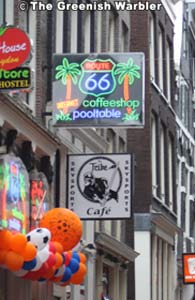 The Netherlands: New government wants to turn all coffeeshops into members-only clubs.

With regard to the Dutch cannabis business, there’s both bad and good news: The bad news is coffeeshops shall become members-only clubs with a identitiy card system. The good news is the smoking ban in cafes and bars smaller than 70m2 will be abolished. However, the smoking ban hadn’t been enforced in drug coffeeshops at all, so the new rule actually isn’t very relevant .

It's all the same, according to a bill signed late Thursday by Gov. Arnold Schwarzenegger that reduces possession of an ounce or less of marijuana from a misdemeanor to an infraction, with a maximum punishment of a $100 fine. "In this time of drastic budget cuts, prosecutors, defense attorneys, law enforcement, and the courts cannot afford to expend limited resources prosecuting a crime that carries the same punishment as a  traffic ticket," Schwarzenegger said after signing Senate Bill 1449.

As a misdemeanor, possession of up to an ounce of pot was still punishable by a $100 fine only and no jail time. But offenders also faced arrest, a possible court appearance and a criminal record. Local marijuana advocates applauded the bill. "That's a step in the right direction, even if it's for the wrong reasons," said Clare Lundy, director of Calm Collective, a mobile medical marijuana dispensary in Rancho Cucamonga.

After signing the bill, Schwarzenegger said he opposed decriminalizing the possession and recreational use of marijuana. He also voiced opposition to Proposition 19, which is on the November ballot, calling it a "deeply flawed measure" that will adversely impact California's businesses without bringing in the tax revenues  promised by its supporters. Proposition 19 would more or less make the new law irrelevant by legalizing possession of up to an ounce for personal use for adults  21 and older. Schwarzenegger said he supported S.B. 1449 because it would save the  state courts money.

Supporters of marijuana legalization in Oregon failed to get the Oregon Cannabis Tax Act (OCTA) on the ballot this year, but now another path appears to be opening. State Rep. Peter Buckley (D-Ashland) has announced he will introduce a legalization bill. He said he expected a hearing in February. Buckley told the Portland Medical Marijuana Examiner he was using OCTA as a starting point because it was "a good proposal."

He said that with budget concerns and "the desire to make progress on this," the OCTA proposal was something for the legislature to consider. OCTA would set up an Oregon Cannabis Commission to regulate the cultivation and sale of marijuana -- but not hemp, which would be legal and unregulated. The commission would license commercial growers and processors, which would sell their product to the commission, which in turn would retail it in commission stores. Cultivation and possession for non-commercial use by adults would not be regulated.


USA: Big Brother to Watch Over Medical Marijuana in Colorado?

Colorado is proposing to enact a medical marijuana tracking system in which everything from marijuana grows to patient purchases to the manufacture of pot brownies would be under constant remote video surveillance where agents could monitor it all. The proposal is giving medical marijuana advocates the creeps.

The proposal comes in the form of draft regulations promulgated by the Department of Revenue's new Medical Marijuana Enforcement Division. The division was created by legislation passed this year and signed by Gov. Bill Ritter (D) on June 7. Its purpose is to strengthen oversight over Colorado's growing medical marijuana industry. The system would be the first in the country to track medical marijuana "from seed to sell," Julie Postlethwait, a spokeswoman for the division told the Denver Channel.

The goal would be to prevent people using forged medical marijuana cards and to quickly track down pot contaminated with mold or marijuana food protects that are tainted. "We want to protect the patient. This is medicine," Postlethwait said. But medical marijuana advocates criticized the proposal as costly and overly intrusive. "There is no conceivable justification for this system," said Robert Chase, a leader of the Colorado Coalition for Patients and Caregivers. "It goes beyond the systems that we use to control opiate narcotic drugs, which are demonstrably much, much more dangerous.

There are valid concerns about the Big Brother issue," Chase said. Chase pointed to other provisions in the draft proposal requiring medical marijuana to be transported in tamper-proof containers and to make growers and dispensary employees provide fingerprints at each step in the supply chain. "It's a highly intrusive process of having to give fingerprints and being under constant video surveillance. It invokes George Orwell's '1984,'" Chase said.

Cannabis composition determines effects on the brain. Some forms of cannabis may contain an ingredient that helps to diminish the drug's negative effects on memory. Smoking cannabis has long been associated with poor short-term memory, but a study now suggests that the strain of cannabis makes all the difference.

In a test of short-term memory skills, only users of 'skunk'-type strains exhibited impaired recall when intoxicated, whereas people who smoked hashish or herbal cannabis blends performed equally well whether they were stoned or sober. The findings suggest that an ingredient more plentiful in some types of marijuana than in others may help to reduce the memory loss that some users suffer.

The key difference between the types of cannabis is the ratio of two chemicals found in all strains. Tetrahydrocannabinol (THC) is the primary active ingredient, and is responsible for the effects associated with the classic 'high', including euphoria and giddiness but also anxiety and paranoia.

The second chemical, cannabidiol, has more calming effects, and brain-imaging studies have shown that it can block the psychosis-inducing effects of THC2. Skunk-type strains of cannabis contain a higherratio of THC to cannabidiol than do hashish or herbal types. Valerie Curran, a psychopharmacologist from University College London who led the latest study, says that if habitual users must partake they should be encouraged to use strains with higher levels of cannabidiol, rather than using skunk. She also argues that studying cannabidiol could provide insight into the mechanics of memory formation, and that it may have therapeutic benefits for disorders involving memory deficits.