A pharmacy in Groningen (Northern Netherlands) will start providing medicinal cannabis at coffeeshop rates this week. At Pharmacy Hanzeplein chronic patients can now get  prescription  cannabis  at 6 Euros a gram. Other pharmacies charge 9 Euros per gram.  Many patients therefore  go to the cannabis coffeeshop (6 - 7 Euros per gram). But coffeeshop cannabis has no quality guarantee while medicinal cannabis is fully guaranteed and of constant quality. Furthermore patients  perceive the atmosphere in coffeeshops as uncomfortable for them and don't feel sure they will really get a gram and not 0.9 gram. The pharmacy can deliver for the indicated price since they buy the cannabis in bulk quantities, weigh and package the cannabis themselves where other pharmacies get their cannabis prepacked and weighed. The project is a pilot by the Bureau Medicinal Cannabis of the Ministry of Health and the pharmacy has signed a contract for the delivery of 12 kilo's making the Hanzeplein pharmacy the first in the Netherlands offering medicinal cannabis at such a low price. 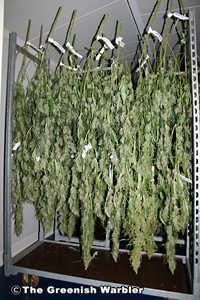 In America, along with the congress elections of November 7, in some federal states and also cities and districts, votings on decriminalising cannabis took place. On the federal state level, there were three votings, but all of them were lost: In South Dakota, there was the first defeat of a medical cannabis measure presented to voters in the United States. This measure would have made South Dakota the 12th state  with a medical cannabis law, but it got a support by only 48 per cent of
voters at the elections on 7 November. The measure in Colorado would have legalized the possession of up to one ounce of marijuana, however, it got only 40%. The measure in Nevada would have permitted the manufacture, distribution, and sale of marijuana to adults aged 21 and older, but failed by getting only 44%. However, many of the local initiatives won, in many cases overwhelmingly so (such as the Santa Monica, Santa Barbara, and Santa Cruz measures, the PPQs in Massachusetts, and the Missoula measure). MPP has a complete chart of results up here: http://www.mpp.org/election2006

Canada: Legal marijuana users decry federally sanctioned product as weak and pricey. Reportedly, the final product is milled before being sold, ensuring the mostly inert stem portions will dilute the dosage. It has been reported that, of all the Canadians who qualify for federal weed, 85 per cent of them don't bother, and continue to buy their medicine on the black market. Thus many pot activists expressed dismay that Prairie Plant Systems (PPS) recently received a one-year
extension of their government contract. While 1,400 Canadians are registered in the medical marijuana program, only 300 order marijuana through PPS. The Vancouver Island Compassion Society alone supplies medical cannabis buds to about 600 clients. According to society director Philippe Lucas, the government has spent more than $8 million on the PPS production facility. "Now if we divide that over 300 people, we can see what we're growing in Flin Flon, Manitoba is the world's most expensive bud," he says.

Science: According to a research of the University of New York at Buffalo, a synthetic cannabinoid, called cannabinoid-1346, that binds to cannabinoid receptors improves the fertility of male cigarette smokers. Previous studies have shown that cigarette smokers' sperm cannot fasten as well to the outside of human eggs, explains Dr. Lani Burkman of the University at Buffalo. The cannabinoid appeared to double the ability of the sperm to bind to the shell of the egg compared with the untreated smokers' sperm. It might have boosted the binding ability of some sperm back to the normal levels seen in non-smokers, says Burkman.