The Netherlands: Mayors of Roosendaal and Bergen op Zoom announce to shut down all coffee shops in their towns

The mayors of the Dutch border towns of Roosendaal and Bergen op Zoom confirmed Thursday that they will shut down all marijuana selling coffee shops in their towns by September 16. They said that by closing the coffee shops they hoped to end the public nuisances created by an influx of some 25,000 non-Dutch pot buyers a week.

Because of more repressive laws in neighboring countries such as France and Germany, Dutch coffee shops have been a favorite haunt of pot seekers in northwestern Europe. But the huge numbers of foreigners coming to the border towns has created traffic, public order, and other problems. Mayors of other border towns have responded with plans to move coffee houses from city centers to the outskirts. 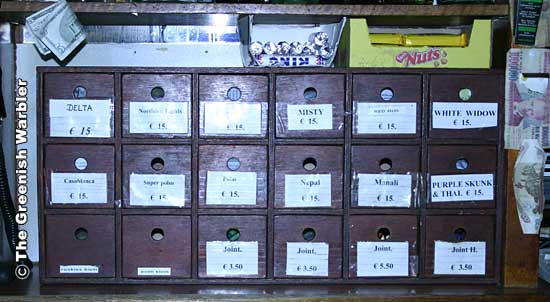 The Netherlands: Mayors of Roosendaal and Bergen op Zoom announce to shut down all coffee shops in their towns.

The conservative Dutch national coalition government, while desiring to see an end to the coffee shops, has committed to taking no action until after new elections in 2010. That leaves the regulatory field to the mayors. An attorney for coffee shop owners said there was little he could do until coffee shops are actually closed down. "But if you want to change drug policy, you first need to discuss it nationally and also check EU law if you want to discourage European tourists," said Harrie Nieland.

USA: The use of medical marijuana can no longer be the sole grounds for losing driving privileges.

In a policy revision - or clarification, depending upon who you speak with - the state Department of Motor Vehicles has determined, in writing, that the use of medical marijuana prescribed by a physician is to be treated the same as any other prescription medication that may affect safe driving.

The update came about after the medical marijuana advocacy group Americans for Safe Access (ASA) filed suit on behalf of a 53-year-old Atwater woman who lost her driver's license due to her use of medical marijuana. "Despite Ms. [Rose] Johnson's clean driving record, not having caused an accident in 37 years of driving, the DMV revoked her license on July 26, 2008," according to the Americans for Safe Access' announcement.

The specific DMV language, according to the ASA, cited Johnson's addiction to or habitual use of a drug preventing her from safely operating a vehicle. Prior to the case going to trial, the DMV added the change to its Driver Safety Procedure Manual and reinstated Johnson's driving privileges, according to the ASA. "The new DMV policy is a significant departure from how the agency approached medical marijuana in the past," ASA Chief Counsel Joe Elford said. "Drivers no longer have their licenses suspended or revoked simply because of their status as medical marijuana patients."

USA/California: Californian marijuana dispensaries cheer Obama’s shift on raids - U.S.
Attorney General Eric Holder's announcement that the federal government will no longer raid medical-marijuana dispensaries was cheered by California dealers as well as state legislators who seek to legalize and tax sales of the drug. Under the Bush administration, the Drug Enforcement Agency raided dispensaries across the country.  Such seizures were especially common in California, which in 1996 became the first state to legalize marijuana sales to people with doctor's prescriptions -- in opposition to federal laws banning any use of the drug.

The attorney general signaled recently that states will be able to set their own medical-marijuana laws, which President Barack Obama said during his campaign that he supported.  What Mr.  Obama said then "is now American policy," Mr.  Holder said.  "We may be seeing the end of an era," said Rob MacCoun, a law professor who studies drug policy at the University of California, Berkeley.  "It's not likely to be a priority for the Obama administration."

That news relieved Kevin Reed, who owns the Green Cross, a medical-marijuana-delivery service in San Francisco.  He said he wasn't too concerned about raids because they usually target large dispensaries that "get out of control" with high traffic and cash flow.  But federal seizures were constantly "in the back of your head," Mr.  Reed said.  Mr.  MacCoun said the Obama administration's stance may help to legitimize a "quasi-legal" marijuana culture in California.  The state has as many as 200,000 medical-marijuana users, the most out of the 13 states that allow such use of the drug. The state law doesn't specify for what ailments the drug can be prescribed.  Californians who seek out certain doctors can easily obtain a prescription for marijuana use; some high-school students do this as soon as they turn 18.

For the first time, a has won an Illinois House committee vote. The House Human Services Committee voted 4-3 Wednesday to send forward HB 2514, the Compassionate Use of Medical Cannabis Pilot Program Act. Under the bill, persons diagnosed by a physician as suffering a debilitating medical condition and their caretakers would be issued an ID card and placed on a registry run by the Department of Public Health.

Each patient could possess up to two ounces of usable marijuana and seven plants. If enacted, the Illinois medical marijuana law would expire after three years and have to be reenacted. A companion bill, SB 1381, is pending in the state Senate. It is sponsored by former state's attorney Sen. Bill Haine (D-Alton) and is scheduled for a hearing next Tuesday.

In Minnesota, medical marijuana is on the move as second senate committee gives okay: A bill that would legalize the medicinal use of marijuana in Minnesota has cleared a second committee in the state Senate, with the Judiciary Committee approving it on a narrow 4-3 vote. A hearing on the companion House bill before the House Civil Justice Committee is expected shortly. The bill, SF 97, would allow qualified patients or their caregivers to possess up to 2 1/2 ounces of usable marijuana and 12 plants. People suffering from cancer, glaucoma, AIDS, Hep C, or Tourette's Syndrome or a chronic or debilitating disease or its treatment that produces wasting syndrome, intractable pain, severe nausea, seizures, or spasms whose doctors approve of their use would qualify.