The Netherlands: Dutch press is writing today that ministers Ab Klink (Public Health) and Ernst Hirsch Ballin (Justice) have agreed to install a ban on the sale of dried ánd fresh magic mushrooms. The decision was taken after months of debates. Magic mushrooms will be included in the schedule of hard drugs and will be completely prohibited. As a reason, the ministers say the effect of taking mushrooms is unpredictable. Some do not feel any effect, others get a 'bad trip'. The ministers have announced that the police will act severely against people who sell and grow mushrooms. A spokesman of the Dutch association of smartshops, Vereniging Landelijk Overleg Smartshops (VLOS) was surprised: 'We feel completely isolated", said Paul van Oyen. 'This will cause big problems for approx. 50 % of the smartshops' The VLOS will now consider which legal products the shops will be allowed to sell." The smartshop owners had hoped that the government would have agreed with the proposal of Amsterdam Lord Mayor Job Cohen, who had proposed to install a priod of three days before someone could buy mushrooms legally. The city of Amsterdam did not want to give a reaction. They first want to hear the official decision, according to a spokeswoman on Friday. 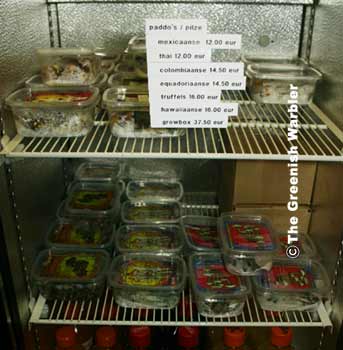 United Kingdom: North Wales' Chief Constable Richard Brunstrom is calling for the
legalisation and regulation of all drugs - and next week will ask North Wales Police Authority to back him. The region's top cop reckons existing drug laws are "not fit for purpose". "In a nutshell, I'm advocating the repeal of the Misuse of Drugs Act and the consequent legalisation and regulation of all drugs," says Mr Brunstrom, who describes drugs prohibition as "unworkable and immoral". "Central to existing UK drugs policy is the ABC classification system. It is now indefensible both legally and ethically. "It is arbitrary and subject to politically motivated manipulation. It is a disgrace." The Chief Constable has set out his arguments in a detailed report which will go before the Police Authority on Monday. He hopes his document will be adopted as the North Wales response to Government and Assembly Government consultations about future drugs laws in the UK.

USA: Costs of prohibition - According to a report published on DrugScience.org cannabis prohibition costs nearly 42 billion US dollars per year in criminal justice costs and in lost tax revenues in the United States. According to the analysis law enforcement spends 10.7 billion dollars annually to arrest and prosecute cannabis offenders. In
addition, prohibition would deprive taxpayers of 31.1 billion dollars annually. The report is available at: http://www.drugscience.org/bcr/index.html (Source: DrugScience.org of October 2007).

Science: British researchers evaluated the long-term tolerance and efficacy of a cannabis extract (Sativex) in patients suffering from rheumatoid arthritis. 38 out of 53 eligible subjects entered the long-term study. 70 per cent of patients completed more than three months treatment, and 51 per cent more than six. Improvements in pain and sleep quality similar in magnitude to those noted in the acute study were recorded, and there was no evidence of tolerance to these beneficial effectsor escalation of Sativex dosage over time. (Abstract by Robson et al.)

Science: Canadian researchers conducted a pilot study comparing four potencies of herbal cannabis (0, 2.5, 6 and 9.5 per cent THC) in patients with neuropathic pain. 23 patients with chronic neuropathic pain due to trauma or surgery who were not current cannabis users received the four potencies in four five-day periods separated by nine-day periods. Researchers concluded that smoking 25mg (one puff) of 9.5 per cent THC herbal cannabis three times daily for five days has a modest analgesic effect on chronic neuropathic pain and improves sleep. The drug was well-tolerated. (Abstract by Ware et al.)