The Netherlands: Maastricht coffeeshop customers will definitely be fingerprinted

The Netherlands: Maastricht coffeeshop customers will definitely be fingerprinted

Beginning from end of September, Coffee shops licensed to sell marijuana in the southern Dutch city of Maastricht will begin fingerprinting customers and scanning their IDs this summer to help prove they're following rules governing such sales.
In particular, the measures are expected to help stores show they are not selling to underage customers and that they haven't sold more than the maximum permitted to a customer on a given day. Maastricht mayer Leers promises that the fingerprint of the right forefinger will be saved for 48 hours and then deleted. "This is not something that we are doing willingly, but with pain in our hearts," Marc Josemans, chairman of the Union of Maastricht's Coffee Shops, said Wednesday. He said shops in Rotterdam and several Dutch border cities were considering following suit. "We're very afraid we're going to lose customers over this, and to be honest we're even a little ashamed we're doing it, but the city of Maastricht has such harsh punishments that we don't feel we have any choice," Josemans told The Associated Press. 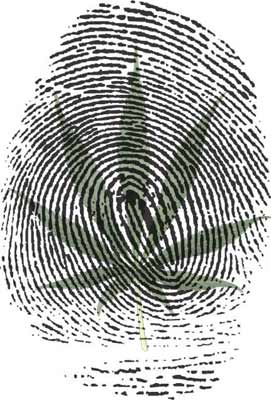 "Will all Dutch coffeeshop customers be fingerprinted in the medium term?"

USA: Humboldt County Supervisors Say Legalize It! In a 4-0 vote, the Humboldt County, California, Board of Supervisors voted Tuesday to send a letter to their congressional representative asking him to work to legalize marijuana. Humboldt County is part of Northern California's famed marijuana growing "Emerald Triangle." The letter, which was proposed by Supervisor Roger Rodoni, asks US Rep. Mike Thompson (D-St. Helena) for his "support in helping to initiate legislation which will legalize, regulate, and tax marijuana." Rodoni pronounced himself pleasantly surprised by the unanimous vote in an interview this week with the Eureka Reporter. "I was prepared to consider it a furthering of the conversation," he said, adding that he didn't anticipate the board's receptive vote. The move comes on the heels of a similar effort by nearby Mendocino County, which last month endorsed marijuana legalization. Other California localities have approved measures calling for the taxation and regulation of marijuana, including Oakland (2004), Santa Cruz (2006), and San Francisco (2006).

USA: Marijuana number one illegal crop in Merced County. In 2006, Merced County law enforcement disposed of up to $87 million worth of Cannabis sativa ¬ about 29,000 plants. This year, law enforcement officials say they have already surpassed that number, destroying 36,420 plants with a combined street value of up to $109 million. And with the prime harvesting months of September and October ahead, they expect to beat the county's record of 40,000 plants found by the end of the year, a
combined value up to $120 million. In July, the Merced Multi-Agency Narcotics Task Force discovered more than 19,000 plants in a 100-acre cornfield near Planada.
Officers said the operation, valued at $76 million, was one of the most sophisticated they had ever seen. The marijuana plants were strategically positioned beside each cornstalk with irrigation drip-lines feeding the individual plants. One member of the task force noted that the plants were so well hidden, even an airplane would have had a tough time spotting them. "There are a lot more plants being grown out there," said Neil Compston, task force commander of the Merced Multi-Agency Narcotics Task Force. One-third of the entire nation's marijuana crop blossoms in California, with an estimated value of $13.8 billion, surpassing the combined worth of the state's grapes, vegetables and hay, according to a 2006 report written by marijuana public policy analyst Jon Gettman

USA: Telltale isotopes in marijuana are nature`s tracking devices. Every so often, a package of marijuana arrives in Jason B. West's mail at the University of Utah in Salt Lake City. While Dr. West may not be the only one on campus receiving deliveries of illegal drugs, he is probably the only one getting them compliments of the federal government. Dr. West's marijuana supply is decidedly not for consumption. It is meticulously cataloged and managed, repeatedly weighed to make sure none disappears, and returned to the sender (a laboratory at the University of Mississippi) or destroyed when he is done with it. With financing from the Office of National Drug Control Policy, Dr. West, 34, is creating a model that can identify the geographic origin of cannabis plants based on certain chemical calling cards. The agency hopes to use the research to help decide where to concentrate its resources. The research, the Marijuana Signature Project, relies on stable isotopes, which are forms of an element like nitrogen or oxygen, that have distinct atomic masses. Long employed in ecological research, stable isotopes are increasingly used for forensic purposes,
including investigations into blood doping, arson and trafficking in
contraband like drugs and endangered species. "Stable isotopes are a signature on plant materials and things that are derived from plants," said Dr. West, a research assistant professor in the university's biology department. "Using them, you can get information about where something grew and its growth environment."

Canada: Church leaders go to court over confiscated pot. The spiritual leaders of a church that uses marijuana as its sacrament are seeking a court order for the returnof several pounds of pot and other items seized from their Barton Street headquarters during an RCMP raid. Church of the Universe ministers Walter Tucker, 74, and Michael Baldasaro, 58, were charged with possession of marijuana for the purpose of trafficking after the Mounties executed a search warrant on May 15, 2000. The raid came after a sting operation in which undercover police officers pretended to join the church and began to buy the sacrament. However, all charges against the pair were ultimately withdrawn by a federal drug prosecutor on Dec.15, 2005. Tucker and Baldasaro claim they are entitled to their property and are seeking $16,000 each in legal costs. "Your Honour, back in May 2000, thieves broke into our church and stole a number of items at the point of a gun," Tucker told Ontario Court Justice Norman Bennett yesterday. The application is adjourned until Sept.  13 because the federal prosecutor was not available to argue the motion. Last month, a Toronto judge dismissed a possession charge against a 29-year-old man after finding that Canada's criminal prohibition against marijuana possession was still unconstitutional.